Tour Book Is Packed With Fun

By a German publisher, '111 Places in Milwaukee That You Must Not Miss' is a surprise.

111 Places in Milwaukee That You Must Not Miss

A German publishing firm has added the Cream City to its roster of city tour guides published under the template of “111 Places That You Must Not Miss.” The books, published by Emons Verlag GmbH, adhere to a format in which the 111 destinations are listed alphabetically. Each receives a page of text, while the facing page consists of a single color photograph of the attraction, captioned with its address, hours, website and public transit directions. Each listing also includes a “Tip,” often about a nearby or a related destination.

The book is written by Michelle Madden, with all but a handful of the photographs taken by Janet McMillan, who, along with the reader, may be excused for not venturing to the site of the Appomatox Shipwreck (Ch. 7), located 20 feet below the surface of Lake Michigan. (Tip: visit the nearby Shorewood Nature Preserve, with “what is said to be the remains of an outdoor church.”)

McMillan is a local photographer, while the Milwaukee-born Madden lives in Los Angeles where she is a screenwriter and journalist. In her “Dear Milwaukee” foreword to what she calls “this love letter of a book,” Madden says she “moved away after college, but I succumb to your gravity; I return all the time. This offers me a fortunate perspective, one that combines the pride of a local with the thrill of a tourist.”

With that apologia made, Madden launches into her tours, devoting about 350 words to each, and usually including an authoritative quote solicited for the book.

The selection of “unusual and interesting places that are waiting to be discovered,” is perhaps a bit stretched in some places. For example, it is entirely possible that I will miss a trip to a place said to be “Al Capone’s Rural Hideout,” a private residence in Brookfield that is not open to the public (Ch. 3) although it’s fun to know it is located on Capone Drive in the Hideaway Subdivision, which dates to 1994.

The “Dahmer Apartment Site,” (Ch. 19) remains an “overgrown vacant lot,” which one need not travel to 924 N. 25th St. to not miss. The essay includes a gratuitous mention of Ed Gein, “The Butcher of Plainfield.” The “Tip” directs us to the nearby Ambassador Hotel, where “Jeffrey Dahmer used one of its rooms for murder.”

“Liberace‘s Boyhood Home” in West Allis, (Ch. 47) was the birthplace a century ago of the flamboyant pianist. His appearance at the Pabst Theater as a soloist with the Chicago Symphony Orchestra at the age of 19 merits the National Historic Landmark inclusion as the chapter’s “Tip.” Perhaps here the subject and its bonus tip were reversed.

The author takes us to “Alice’s Garden,” (Ch. 4) an urban agriculture space including “Fieldhands & Foodways,” which is “planted to reflect the time from pre-slavery through sharecropping.” That it is located on the site of the one-time farm of abolitionist Samuel Brown and was once an outpost of the Underground Railroad merits reflection, as does McMillan’s photograph of the garden, which was crowned by a rainbow at the time. The useful “Tip” informs the reader that some 60 varieties of herbs grown at the garden are available for sale Saturday at Fondy Farmers Market.

The author pays a visit to Forest Home Cemetery, the eternal resting place of thousands of Milwaukee’s elite who would never have made the South Side their home while alive. We are directed to “Beer Baron’s Corner,” (Ch. 11) where we learn that for months after his death on January 1, 1904, the body of Capt. Fred Pabst remained under 24-hour armed guard while his tomb was being constructed.

The author takes a stroll up the “Booth Street Stairs” (Ch. 13) and cites Urban Milwaukee’s Carl Baehr who informs us that the street got its name in 1857 in honor of the abolitionist lawyer. In 1994 an adjacent stub of E. Reservoir Ave. was renamed for Joshua Glover, a fugitive slave arrested here in 1854 and defended by Booth. The “Tip” is a doozy, leading us a dozen blocks north to “The Booth Street Bubbler,” a “drinking fountain for everyone.” It was installed by plumber Micha MacArthur in front of his home at 3155 N. Booth St., MacArthur is quoted as saying he was moved to do so by “neighborhood rivalry, a longing for our socialist past and a touch of heartbreak.” I’ll put this attraction on the “Must-See” list.

On the “Will-Miss” list is Solid State Tattoo, (Ch. 92), which seems to have been chosen since the Bay View studio pays homage to Amund Dietzel, who tattooed in Milwaukee from 1913 until the city banned the trade in 1967. 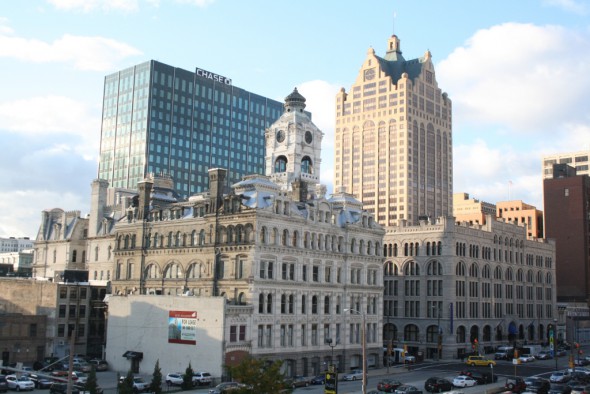 The Mackie Building (Ch. 50) is celebrated for being “the site of two unlikely firsts.” The earliest was the development of the trading pit sunk into the floor of the Grain Exchange room of the 1879 structure. The second was as the birthplace of the bicycle messenger industry by a teenaged Edward Steichen, later an acclaimed photographer. The former Western Union site is now the Swingin’ Door Exchange, “which is still a bike messenger hang.” Co-owner Shelley Sincere is quoted saying “we try to cater to them with a special — three cans of PBR, Coors Light or Point for $5.” PBR me ASAP.

Milwaukee’s unsung role in the fashion world is little heralded or even observed in the dress of its inhabitants, but it is considerable. The “Florence Eiseman HQ” on S. 4th St. (Ch. 23) tells the story of the Milwaukee woman who was said to have originated the A-line dress. Jacqueline Kennedy, who epitomized the haute couture of her era, dressed her children in Florence Eiseman.

The presidential connection continued until quite recently, the author informs us. “Wee friends of the Obamas also wear Eiseman, as the brand secretly made the official White House baby gifts during that administration.”

The author’s breezy style and fondness for original research and interesting details makes the book an easy and informative read. The editing is consistent and far above par for a work of its sort. I only noted one error of fact, in which the text says “if you head down Lincoln Avenue in Walker’s Point, you will see this place nestled in a sort-of trestle.” The reference is to the “Model Railroad Club,” (Ch. 62), which is actually on E. National Ave. and which the caption to the photograph accurately notes.

The book was underway before the decision was made that Milwaukee would host the 2020 Democratic National Convention; some of whose attendees might indeed purchase the volume, priced at $19.90. The publisher informs us that a “111 Places” book is in the works for Charlotte, the site of the 2020 Republican National Convention.