Now that the U.S. Supreme Court has decided federal courts can’t stop partisan gerrymandering, Wisconsin advocates for a nonpartisan approach to drawing legislative districts are stepping up their campaign for legislation to change the system.

Companion Senate and Assembly bills introduced in June would hand the task of drawing district maps over to the nonpartisan Legislative Reference Bureau, partnered with a new advisory commission. Advocates for the bills will hold a news conference at 10:30 a.m. Tuesday in the capitol.

The legislation is now the only pathway to reforming the system after the high court’s 5-4 ruling June 27 that blocked lawsuits over legislative maps in Maryland and North Carolina, according to Jay Heck, executive director of Common Cause Wisconsin, an election reform organization.

“Our reform efforts always assumed that the courts, particularly the United States Supreme Court, were not going to be very helpful,” Heck said.

The Supreme Court ruling, written by Chief Justice John Roberts, declared that “partisan gerrymandering claims present political questions beyond the reach of the federal courts” and put an end to a legal battle over legislative redistricting after the 2010 elections that had included Wisconsin.

The results of partisan gerrymandering

The state legislature redraws legislative maps every 10 years following the decennial census. In 2011, with the Republican Party holding both the governor’s office and majorities in both houses of the state legislature for the first time in decades, Republican lawmakers met behind closed doors with lawyers from the Milwaukee firm Michael Best & Friedrich to draw new maps.

The result concentrated Democratic voters into fewer districts and spread Republican voters among a larger number of districts.

In 2016, a three-judge panel of the 7th Circuit federal appeals court in Chicago ruled in a lawsuit brought by Democratic voters that because of extreme partisan gerrymandering, the Wisconsin maps were unconstitutional. The U.S. Supreme Court later blocked that decision on the grounds that the plaintiffs hadn’t established standing but didn’t rule on the substance of the argument.

But with its latest decision — arising from challenges to maps drawn by a Republican legislative majority in North Carolina and a Democratic majority in Maryland — the high court asserted directly that federal courts cannot address allegations of partisan gerrymandering.

The result leaves reform advocates essentially where they were when they took up the issue in 2012.

“We felt, and we have felt for years, that we needed to put a different system in place,” Heck said. “We never dropped that reform plan.”

Besides Common Cause, the coalition working on redistricting includes the League of Women Voters, the Wisconsin Democracy Campaign, the Wisconsin State AFL-CIO and other groups.

The Wisconsin bills that they back borrow from an approach Iowa has used since 1980, when it was adopted by a Republican-controlled legislature and a Republican governor. Under that system, a nonpartisan commission draws the district maps, which the legislature then votes up or down.

Wisconsin’s constitution vests the authority over the maps in the legislature, and the reform bills don’t change that, Heck said, because they still give lawmakers the final say in an up-or-down vote. But by putting the map-drawing in the hands of a nonpartisan panel, the bills are intended to remove political calculations from the process.

The question now is what sort of airing the reform bills will get in the current legislature.

Gov. Tony Evers included a fair-maps provision in his 2019-20 proposed budget, but the Republican-controlled Joint Finance Committee stripped the language from the bill. Heck said that was expected; the purpose of inserting the language was to force a public hearing on the subject. At the April hearing, “dozens of people testified in favor of it,” Heck said, and no one testified in opposition.

Heck acknowledged it would be an uphill battle to pass a reform bill through the current legislature. Three Republicans have signed on as cosponsors in the Assembly, but if lawmakers otherwise vote along party lines, it would still fall short of passing. The Senate version so far has no Republican cosponsors.

Reform advocates, however, are playing a longer game. They expect to see the issue come up in at least some legislative campaigns next year. 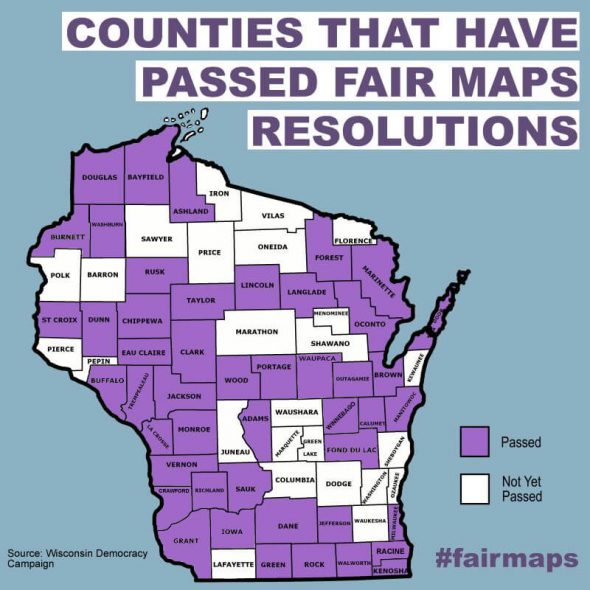 County Boards in 47 of the state’s 72 counties have passed resolutions calling for an end to partisan map-drawing.

In the meantime, they’re pursuing other pressure points. County Boards in 47 of the state’s 72 counties have passed resolutions calling for an end to partisan map-drawing. Those counties cover 32 of the state’s 33 Senate districts and 91 of the 99 Assembly districts.

In a poll earlier this year by the Marquette University Law School, 72 percent of respondents, including 62 percent of Republicans, supported nonpartisan redistricting.

Former state Sen. Dale Schultz, a Republican, said he’s seen a significant shift in public awareness of the issue since he began traveling around the state with former state Sen. Tim Cullen, a Democrat, to talk about redistricting reform several years ago.

When they started, a lot of voters didn’t understand the issue, Schultz recalled. “That’s no longer the case,” he continued. “People are tuned in. You can’t say that people don’t care anymore because it’s clear that they do, and people clearly understand that while the Constitution says politicians have to vote on the plan, it doesn’t mean they have to draw it. It is a very popular issue now, and it’s only going to get more popular.”