A Horse Is Not Just a Horse 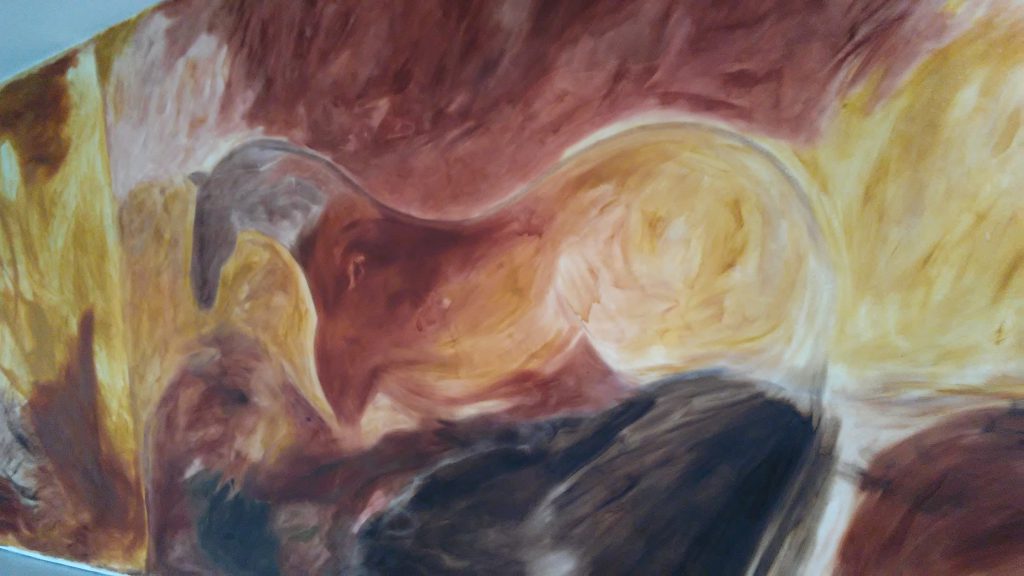 “Ode to Tazz,” a mix of oil paintings, sculptures, digital video and even a bit of poetry by Chicago-based artist Dominique Knowles, will be on display at the gallery through August 3.

Born in Nassau, Bahamas in 1996, Knowles, though only in his early 20s, is an accomplished artist and equestrian. Knowles has had solo exhibitions regionally, nationally and internationally, has won equestrian medals, and has worked as an equestrian trainer. In 2017, he received a BFA from the School of the Art Institute of Chicago, and is currently a graduate student in painting at the college.

The artist is also a poet. “Ode to Tazz” was taken from a line in one of his poems dedicated to his horse, Tazz, a quarter horse and Welsh pony mix. Knowles has a deep affinity for horses, an animal that has been a constant for him for much of his life.

“They are kind of my conduits to experience nature, and the earth as well,” said the artist at the Green Gallery’s opening reception of the exhibition on June 23.

Knowles’ paintings, many of which incorporate earthy, elemental colors and showcase equine figures, are reminiscent of cave drawings created  thousands of years ago by ancient cultures who revered animals and the natural world. “Over the last few years, I’ve started to incorporate figures more abstractly,” the artist noted.

The mural-like “(Ether),” spans an entire large gallery wall, featuring fiery reds, golden yellows, and burnt umbers, with an outline of a horse, a truly majestic beast, as the painting’s centerpiece. One can make out faint human and animal figures–such as a rhinoceros–in the painting as well.

“I really just wanted to make a monument for the horse,” Knowles said.

“Pegasus Born of the Sea as the Blood of Medusa Erupts,” with vivid purples and blues, and brilliant oranges and yellows, captures the story of the winged horse, Pegasus, who, according to Greek mythology, was created from the blood of the Gorgon Medusa, who was slain by heroic Perseus. “Dean’s Black Hole (Portal),” appears to ponder the mysteries of astronomy and the origins of the universe.

Gallery visitors can browse through an Indonesian woven leather book (given to Knowles by his grandmother) of the artist’s abstracted wax drawings.

A video running approximately an hour and 45 minutes in three acts— “Cenzina,” “Hickstead,” and “Talequah,” depicts footage of international equestrian competitions, sunsets, waves crashing along the beach, an orca whale which carried her deceased calf for 17 days, and a chimpanzee studied by renowned primatologist Jane Goodall. According to Knowles, the natural footage was intended to both illustrate earth rhythms and how animals, like humans, often mourn the loss of their loved ones.

To perhaps represent the unbreakable bond that has always existed between humans and animals, Knowles has etched his poetry and drawings into sculptures made out of a more permanent medium–Carrara marble and alabaster stone.

“I should try to press on your skin and breathe into you as much as I can/To love you is to make a lasting memory of my embrace in your body,” Knowles writes in an homage to his beloved horse. “I’ll keep going until my blood is in your heart.” 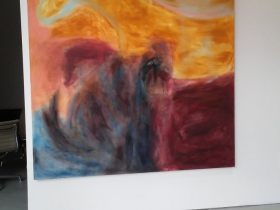 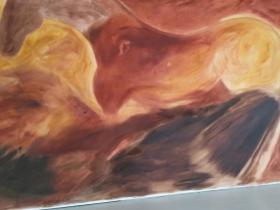