Milwaukee Downtown leads the reinvention of small triangular park near 2nd and Wells. 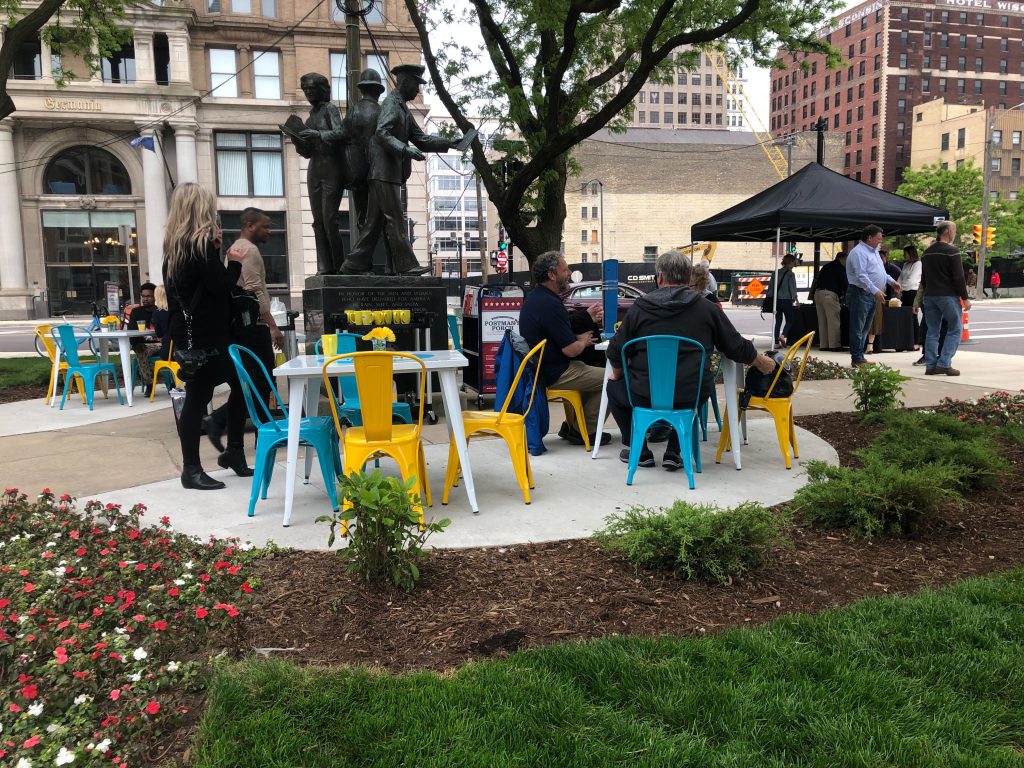 Tables and chairs at Postman’s Porch. Photo by Jeramey Jannene.

An oft-overlooked downtown park has again been reinvented.

The statue, installed in 1989, honors the 60 mail carriers that met in an adjacent saloon in 1889 to form what is today the National Association of Letter Carriers union.

The project, which relied on $12,000 in private support, was led by Milwaukee Downtown’s environment specialist Gabriel Yeager.

Yeager’s boss, the group’s president Beth Weirick, noted that Yeager’s idea didn’t take long to take hold. “As soon as we placed these bistro chairs we noticed that people began using the space,” she said. Brunch will even provide table service to those sitting at the tables, should you want to dine while enjoying the park.

“The more we can create these partnerships that are going to allow the public to use this space for free, it’s going to be an asset for the entire city of Milwaukee,” said Mayor Tom Barrett at a ribbon-cutting ceremony.

“This is a very good example of what is required to move forward and create amenities,” said area Alderman Robert Bauman. He noted the cash-strapped city can’t be expected to do it all alone. “There is a need to extend the largesse of our business to not just Downtown.”

If you’re getting a sense of deja vu from reading this article, you’re not alone. NEWaukee led a temporary placemaking intervention of the park in 2016, known as Postman’s Plot, that included installing movable wood furniture (designed to mimic a mailbox). That project ultimately drew opposition from nearby resident Dick Blau and a handful of other area residents.

“To the credit of NEWaukee, it was successful in getting all eyes on the square,” said Yeager in an interview. “The thing with placemaking is you have to get all residents to buy in on the project.” Yeager said he started outreach on the project in January.

The latest revision of the square benefits from sidewalks and a park that was rebuilt as part of the reconstruction of W. Wells St. But it will need frequent oversight, and possibly a new surface, to be a long-term success. Evidence of frequent visits by dogs and their owners can be found in the many brown spots in the new grass.

Bauman said he received a “flurry of complaints” this year, prior to Milwaukee Downtown taking over, with regard to dog waste piling up at the site. The BID and its partners have pledged to clean the park and maintain the flowers. A Milwaukee Arts Board grant will allow Milwaukee-based Vanguard Sculpture Services to clean the statue.

Wisconsin State Association of Letter Carriers president Scott Van Derven was on hand for the ceremony and praised the efforts of Milwaukee Downtown. “It’s all about that interaction between you and us,” said Ven Derven.

Postman Square was referenced in both the 1999 and 2010 Downtown plans as a potential area for redevelopment, and Department of City Development employee Kyle Gast even completed a master’s thesis on the potential for the area.

Today much of that future development hinges on what happens with the Milwaukee Symphony Orchestra‘s music hall project. That project, which will result in a substantially narrowed N. 2nd St., has the potential to greatly expand the park. The Department of Public Works will want to consult with Gast and his colleagues on ways to better connect the park to the surrounding area by possibly installing crosswalks at its northern edge (something completely absent today) and adding wayfinding signage.

The park wasn’t always so overlooked: it was formerly home to a triangular building, aptly known as the Triangle Bar (photo). The tavern was for a while owned by the Cream City Brewing Co., which put it up for sale in 1914. The tavern was demolished in 1919 when the space became a streetcar transfer point. In 1945, Emilie Raasch, widow of Triangle owner Julius Raasch, passed away, and the Milwaukee Journal noted that the tavern was popular during big events Downtown, when patrons would head to the roof to watch a parade go by or see election returns projected from the Germania Building.

The park was also the site of the 1968 Vietnam War protest by the Milwaukee 14. The 14 religiously-motivated activists stole approximately ten thousand draft records from the Selective Service office in the Germania Building and burned them in the park. 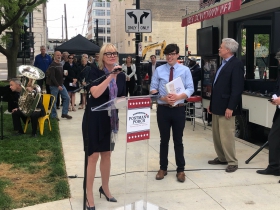 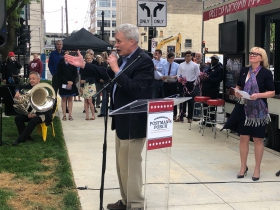 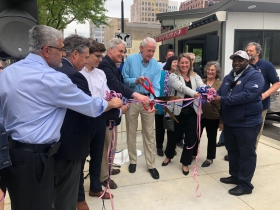 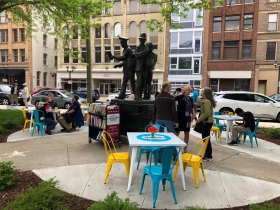 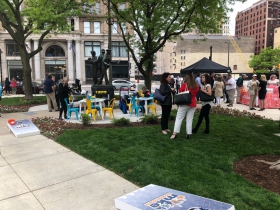 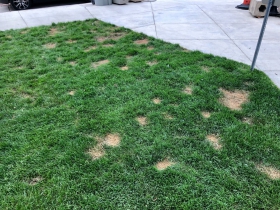