Human Is As Human Does

Eight artists offer “portraits” at the Real Tinsel Gallery that are about the physical traces people leave behind.

Examining the idea of a human being as a verb rather than a noun, The Human Stain highlights the works of eight artists— Alexander Martin, Jonathan VanDyke, Mariah Tate Klemens, Skully Gustavson, Keith Nelson, Michelle Marti, Quinn Tivey, and Michael Lagerman. Using a mix of mediums, including a stained couch and mattress cover, makeup and linen, a large glass jar, and video, these works represent physical traces people leave behind.

“The portrait has a diverse history, but its variation still lies mostly on the spectrum of observational description,” writes Real Tinsel Gallery owner Shane McAdams in a recent press release. The gallery is located at 1013 W. Historic Mitchell St.

Like pieces of a puzzle, many works give insight into aspects of artist’s personality, interests and lifestyle, such as Alexander Martin’s “Queen’s Shroud” (removed makeup on linen, 2018) and “Snatched” (removed makeup on paper). Martin, also a drag queen, has perfectly preserved his performance “face” on cloth and paper. In his work “Tache Hue Main,” Skully Gustavson leaves impressions of black and red body paint (a medium which he has applied to his own body) on an 8” x 42” piece of paper. The piece is lively, with shapes that appear to be dancing.

Michael Lagerman’s “Road as Signifier” (a half-hour video which employs negative black-and-white digital film) documents the artist’s road trip to the West Coast. Lagerman seems to enjoy exploring wide-open spaces. The blindingly white trees and even an occasional deer, contrasted with the man-made road, could suggest the special relationship the artist has with nature. Jonathan VanDyke’s 13-minute long video “Saints” could hardly be more different: it features images of feet walking over colorful scraps of cloth and a white, mask-like piece of paper covering a face, with the heavily made-up eyes peeking through.

Quinn Tivey uses social media as an inspiration. The artist uses a lenticular (a special kind of lens used to create a three-dimensional illusion) in two  photographs, “Pet My Hair and Tell Me I’m Pretty”, which are enlarged algorithms of Tivey’s social media profile. Facebook and Instagram may be concerned with superficiality and physical imagery, but Tivey’s colorful photographs contain depth, urging viewers to look beneath the “surface” of the constant barrage of selfies and memes continuously posted on social media. The artist’s “Nameplates,” a neat row of acrylic and metal signs, are memes and other phrases taken from Facebook posts. Many, like the signs that read “promise me you’ll never leave,” “pretend I’m cute,” and “admire me,” further illustrate the notion that Facebook can often fuel desperation and narcissistic tendencies.

Mariah Tate Klemens’ “The Tears I Cried Over the Works of Jane Austen” is an empty glass jar with a lid). Michelle Marti’s “Gold,” (screenprint and watercolor, 2016) is a depiction of male genitalia. Are both works and their titles meant to be tongue-in-cheek?

Used, worn furniture also builds on the idea as the human being as a verb. Marti’s second piece, “In One Sitting,” is a tan vintage and mahogany wood couch, with a large dark stain on its back, created with Vaseline. Keith Nelson’s “Untitled” (polycotton fabric and acrylic on panel) is a mattress cover, which, according to McAdams, was found in a park. The acrylic seems to mimic a mattress soiled by bodily fluids.

Then there is a mini-exhibit: Chamber, Kyle Seis’s gallery, is housed within the Real Tinsel Gallery basement, and presents Four Fingers, a series of abstracted figure paintings in idyllic settings by Milwaukee artist Joe Steiner. Deep maroons meet teal and royal blues, along with whites and light grays, sage greens, and oranges. The exhibit will run through June 29.

“Joe’s work harkens back to modernist abstraction’s early days, when it was still keeping on an expressive embellishment of recognizable subject matter. His figurative work stylizes and generalizes figures to turn them into puzzle pieces that can be used formally along with color to create twisting and dynamic compositions somewhat between representational and abstract,” McAdams said.

This is an exhibition that offers more questions than answers. 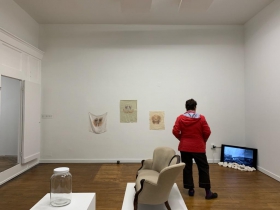 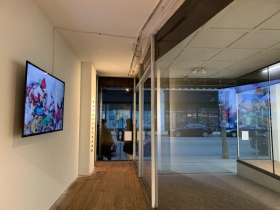 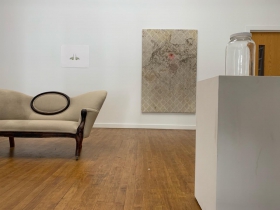