Yet the Bradley Foundation is leaving the historic home, which could fetch a big price. 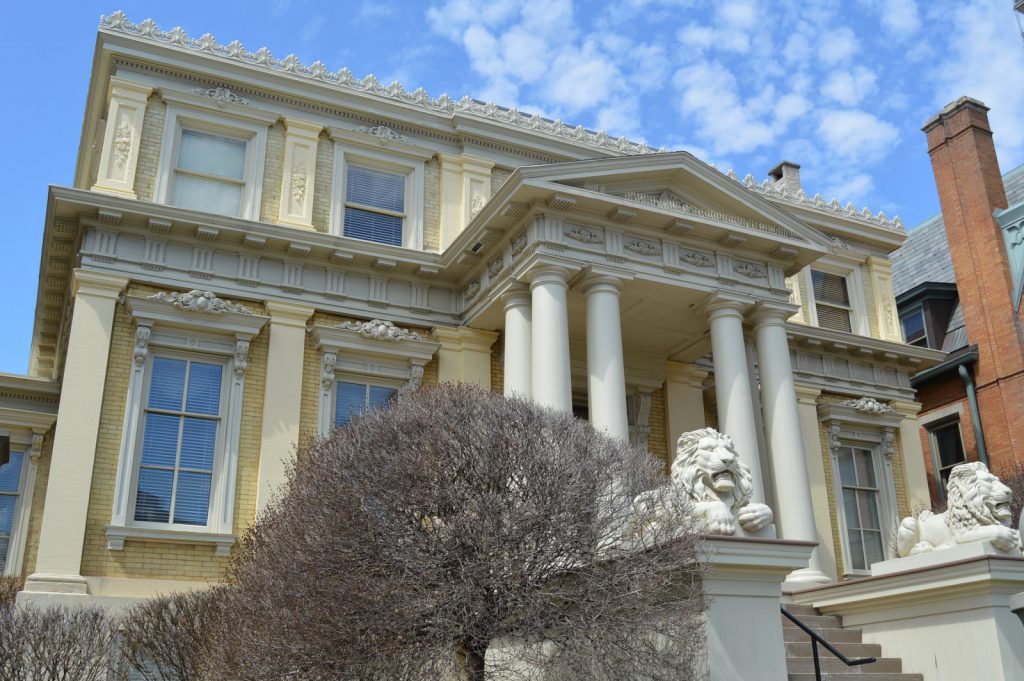 On April 15th the Lynde & Harry Bradley Foundation announced it would leave the elegant 1855 Yankee Hill mansion complex it has owned and occupied for over two decades. The $913 million foundation (according to its most recent federal tax form) is to move to rented quarters downtown in the new Hammes Building at 1400 N. Water St. Its current headquarters, the “Lion House,” is one of the most distinctive and historic structures in the city, and one of only a score of Antebellum buildings remaining here. According to the Historic American Buildings Survey, it is “the finest surviving pre-Civil War home in Milwaukee.”

The news came as a surprise to many. The foundation had assembled a parcel of three of the city’s finest 19th-century mansions, and had invested what appears to have been millions in their repair and restoration. Two of the three were tax-exempt, and none had mortgages. Why the move?

The Edward Diedrich House, built in 1855 at what was then 645-Franklin Pl., gained its nickname almost immediately in tribute to a pair of carved wooden Panthera Leo standing guard as they flank the stairs to the 5,795-square-foot mansion. The northernmost of the two, its right paw clenched and its left extended, serves, fittingly, as the logo for the Bradley Foundation. (Mission: “restore, strengthen, and protect the principles and institutions of American exceptionalism.”)

The new building, with its traditional components (symmetry, columns, windows with alternating curved and pointed pediments, a copper dome) boasts elements popularized by Italian architect Andrea Palladio (1508-1580) and his follower, Thomas Jefferson, (1743-1826). Its design has been derided by some critics, who criticized its throwback classicism. City Plan Commission member Whitney Gould, formerly architecture critic of the Milwaukee Journal Sentinel, called it “an object lesson for the future on how not to build a building.”

In 2016 Tom Bamberger wrote in Urban Milwaukee that “The Hammes headquarters…has none of the virtues of Jefferson’s architecture and all the vices of late 20th century suburban development. … It’s going to be the dumbest building downtown.”

As for the criticism, the Bradley Foundation is having none of it. “The neoclassical architecture is a natural fit for The Bradley Foundation, whose mission is to restore, strengthen and protect the institutions and principles of American exceptionalism,” the press release reads. The lobby will include inspirational quotations from the Founding Fathers, including Jefferson.

Not only will the foundation leave its signature lions behind, it will also lose the property tax exemption it enjoys in the Lion House and the adjacent Hawley House, 1249 N. Franklin Pl., which it also owns. The two were connected in a 1995-99 renovation and expansion designed by architect David V. Uihlein, Jr., the grandson of foundation founder Harry Bradley, a former member of its board of directors, and a go-to architect for historic restorations.

In response to an inquiry as to the tax status of the new offices, the assessor’s office states: “The building itself would NOT be exempt if it is not owned by a nonprofit organization even if it is leasing it to a nonprofit. The nonprofit could apply for exemption for personal property but not real estate.”

The building tenants will have parking adjoining their offices in a connected structure, which itself is valued at over $4 million. This is an amenity lacking at the current location, where many staffers and visitors park on the street. It almost certainly played a role in the decision to move.

The Lion House and the Hawley House are but two of three adjoining properties owned by the foundation. They are joined by the 1896 Bloodgood House, which also has frontage on N. Franklin Pl., but has an address of 1139 E. Knapp St. This lovely building, restored this decade by Uihlein, is the headquarters of the Wisconsin Institute for Law & Liberty, founded by a seed grant from the Bradley Foundation in 2011, and now a powerhouse of its own, championing school choice, Republican gerrymandering and many other causes. The law firm has announced it will relocate to 6,300 square feet of leased space at 330 E. Kilbourn Ave., doubling its footprint. That structure also has enclosed, attached parking, lacking at the current facility.

Unlike its neighbors, the WILL office building is not tax exempt, and is on the rolls with a total assessed valuation of $797,500. Of this, the 3,557-square-foot lot is assessed at $177,900, or $50.00 per square foot, and the 3,168-square-foot building is assessed at $619,600. The asking price has not yet been revealed for any of the properties, although their sale has been announced.

Board Member to Broker Sale

Like the other properties owned by the foundation, the Bloodgood House will be offered for sale by The Barry Company, a local commercial real estate firm. James T. Barry III, an attorney and President and CEO of the firm, serves as a member of both the WILL and Bradley Foundation boards, so it looks like the decision to list the properties with his firm was a lock. Neither Barry nor the Bradley Foundation responded to a request for comment on the sale plans.

Due to their tax exempt status, the city does not list a valuation for the Lion House or the Hawley House. Although it has identified itself as the listing agent, The Barry Company has not yet offered the properties for sale on its website, so an asking price cannot be determined. Furthermore, the most recent transfer of the property, (recorded in 1991 according to city records) does not list the sale amount,  which is entered as “$0.”

But we do know that the Lion House sits on a 9,604-square-foot lot, which would be assessed at $480,200, provided it were valued at the same $50 per square foot as the Bloodgood House. The city maintains a placeholder value of only $115,200 for the land and $214,000 for the improvements. (This appears to be the assessment from 1991.) The current improvements value is unknown, but we can venture a guess. The building was completely renovated in the 1995-99 project by Beyer Construction. According to the firm,

The goal of the renovation was to recreate as closely as possible the splendor of the mansion when it was first built. Carpenters rather than general laborers handled some of the demolition to preserve intricate millwork, ornamental pieces, wood carvings, and cornices for restoration by experts in the craft.

That’s money. Had the building simply increased in value by the rate of inflation, that assessed value for improvements of $214,000 would now be worth slightly more than $401,000, which added to the lot’s value, would give a total value of about $881,000. But given the significant improvements undertaken and the likelihood that the building has been kept up beautifully, its not inconceivable that its price might approach $1 million.

By the same metrics of valuation, the Hawley House lot of 3,557 square feet, would be assessed at $177,850. The city’s last valuation, from January, 1999, when the property was sold to the foundation for $535,000, was $49,800 for the land, and $468,200 for the improvements, for a total assessed valuation of $518,000. It too has been thoroughly improved, and should fetch a handsome price. It is possible that some or all of the buildings may be returned to residential use, perhaps even as single-family residences.

After the death of Elliot Fitch, a banker who was the last to occupy the home as a single-family residence, the property was bought in June 1984 by James A. Hummert for $285,000. Hummert engaged H. Russell Zimmermann in 1986 to superintend a historic restoration of the building. Zimmermann was up to the task, noting, “If you had, for some reason, to destroy all but one house in the district, this is the one that would have to be saved.”

At the time, the home was missing a few of its original elements — including the pair of lions that gave the building its name. The originals were carved by Richard H. White at the time of the home’s construction in 1855. They reposed on the porch for nearly 90 years until they ultimately deteriorated occasioning their removal in 1943. Even so, minus the lions, the home retained its popular name for decades.

Zimmermann hired Al Felch to reproduce the lions from historic photographs. The work took 18 months. The lions each consist of 550 pounds of mahogany in the form of 79 pieces glued together. They measure 69 inches long, 43 inches high, and 33 inches wide. The blocks were cut in Sheboygan and assembled at MIAD before being transported to the site. The lions are hollow, so as to delay decay of the wood. The void in the structure reduces cracking, by permitting expansion and contraction. The lions sit on rubber washers, as further insurance against the effects of our harsh and variable climate. 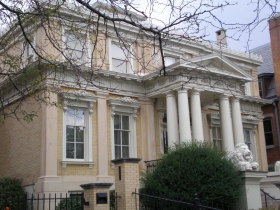 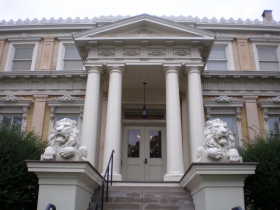 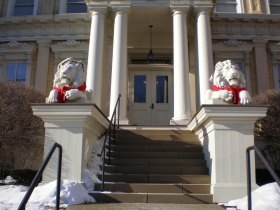 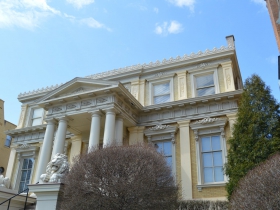 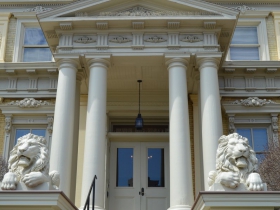 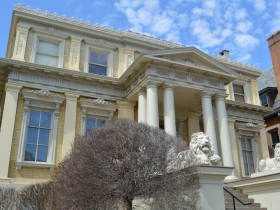 How Milwaukee is it? It is 0.8 miles east of City Hall