Many of the lowest ranked states supported Trump. Wisconsin was one exception. 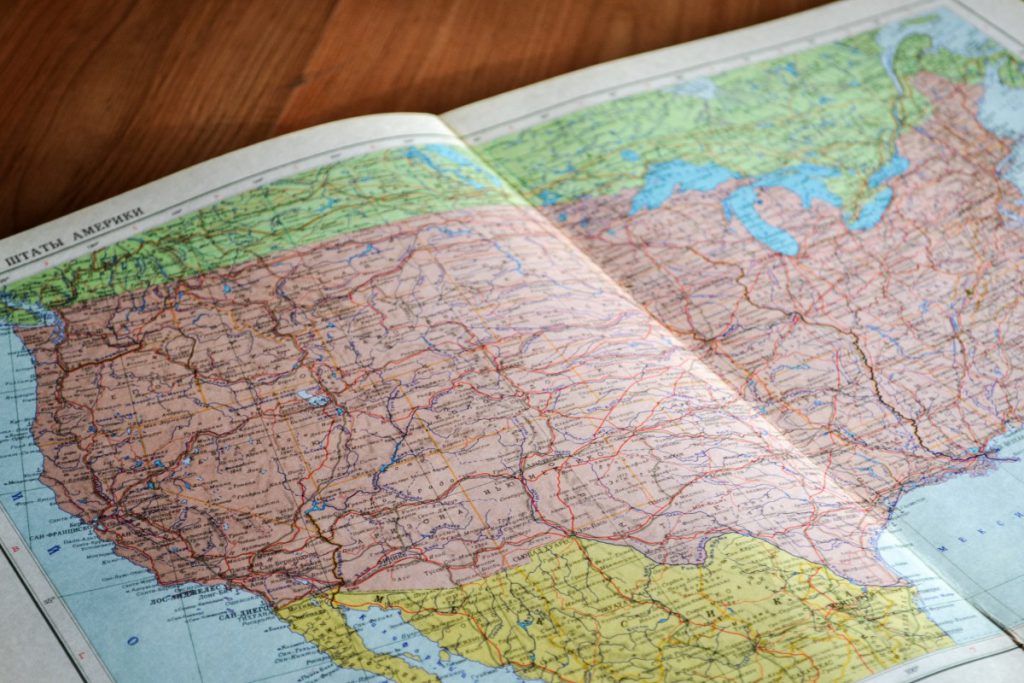 Map of the United States of America. CC0 Public Domain.

Recently, two reports attempting to use statistical data to identify the best and worst states for their residents were released. What do these reports tell us and what are their limitations?

Early in May, US News, known particularly for its ratings of colleges, issued its third annual “Best states” website. The site includes rankings that measure the 50 states across eight different categories, as shown in dark blue in the graph below. Each of the category ratings is based from two or three sub-categories, shown here in green. Each of these is evaluated using one or more metrics. Each ranking is derived from one or more metrics.

U.S. News argues that “Best States is the first comprehensive effort to gauge how states perform across a wide array of issues. … Existing state rankings tend to focus on a very narrow set of issues, such as the business or tax environment of a state or the education and health care offered there.”

The chart below shows the rankings in the categories and sub-categories for Wisconsin. Overall, Wisconsin does quite well, gaining an overall rating that places it 11th best among the 50 states. 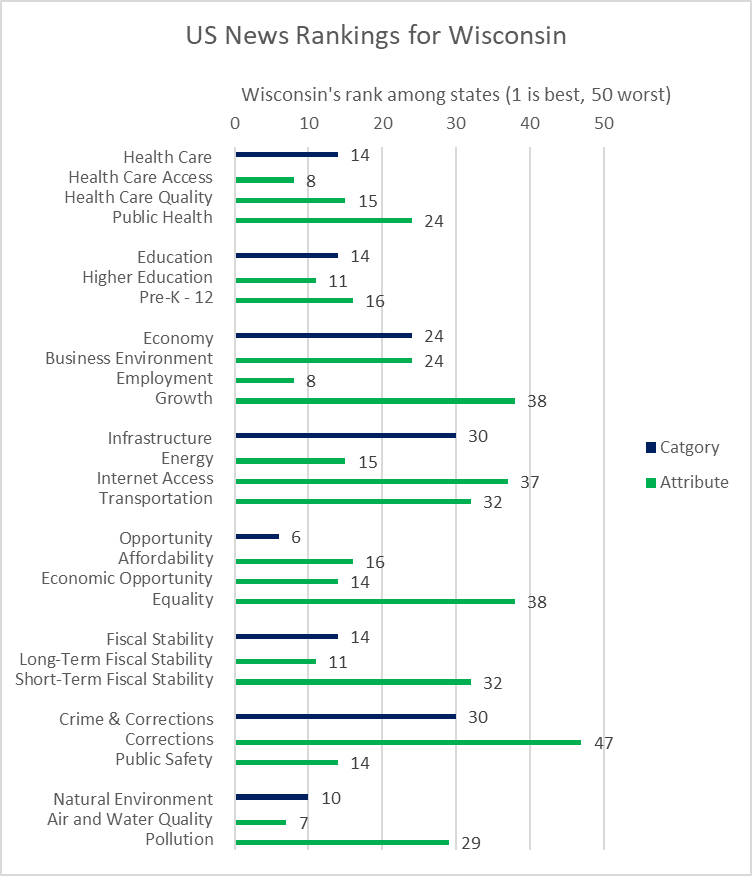 US News Rankings for Wisconsin

Although Wisconsin fares quite well, in a few sub-categories it brings up the rear. For example, it is rated 47th best on corrections. This results largely from its worst in the nation difference in the incarceration rates between non-Hispanic whites and other groups.

Here are three other categories in which Wisconsin is rated well behind the average state:

In April, WalletHub, a personal finance website, launched “Best & Worst States for Millennials.” According to WalletHub’s calculations, Wisconsin ranks 5th among the states (plus Washington DC) as a place for Millennials to live. The ratings are based on five factors, as shown below. The first four are weighted equally, at 22.5 percent. The last, Civic Engagement has a 10 percent weighting. 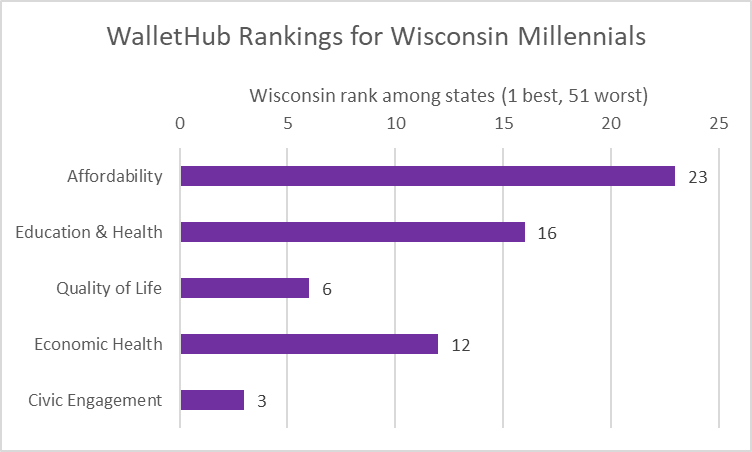 Not surprisingly, perhaps, there is considerable agreement between the US News and WalletHub ratings. The graph below plots each state’s overall US News ranks on the horizontal axis (low ranks are best) against WalletHub scores, on the vertical axis (high scores are best). About half of the variation in WalletHub scores is predicted by the variation in the US News rankings, as shown by the R2 of .5039. This is not surprising, given the overlap of some of the measures used by both analyses, such as in health. 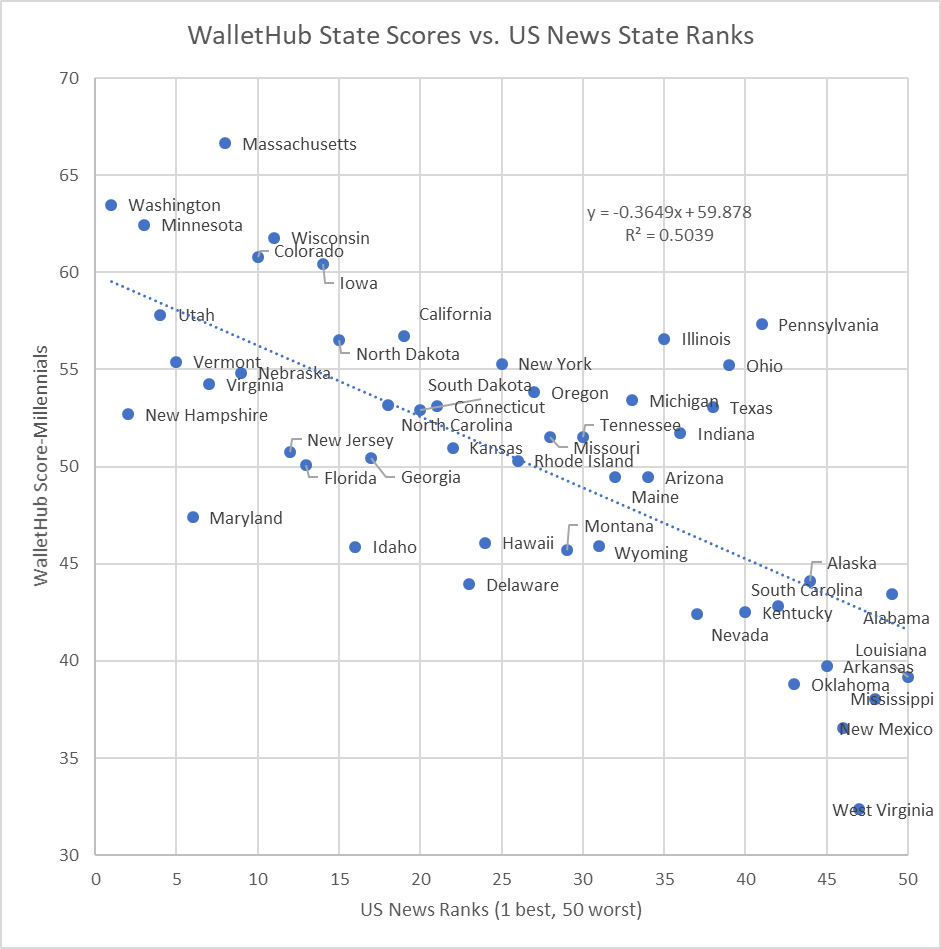 Is there a political lesson from these rankings? If one goes to the websites for these two ratings, the initial view typically shows a list of the ten best states and the ten worst states. Several commentators were struck by an obvious pattern: the ten best states were heavily represented by states that rejected Donald Trump in the 2016 election; by contrast, the ten worst states were mostly won by Trump. This impression is confirmed by the chart below, which shows the US News ratings on the horizontal axis and Trump’s percentage of the state’s total vote on the vertical. 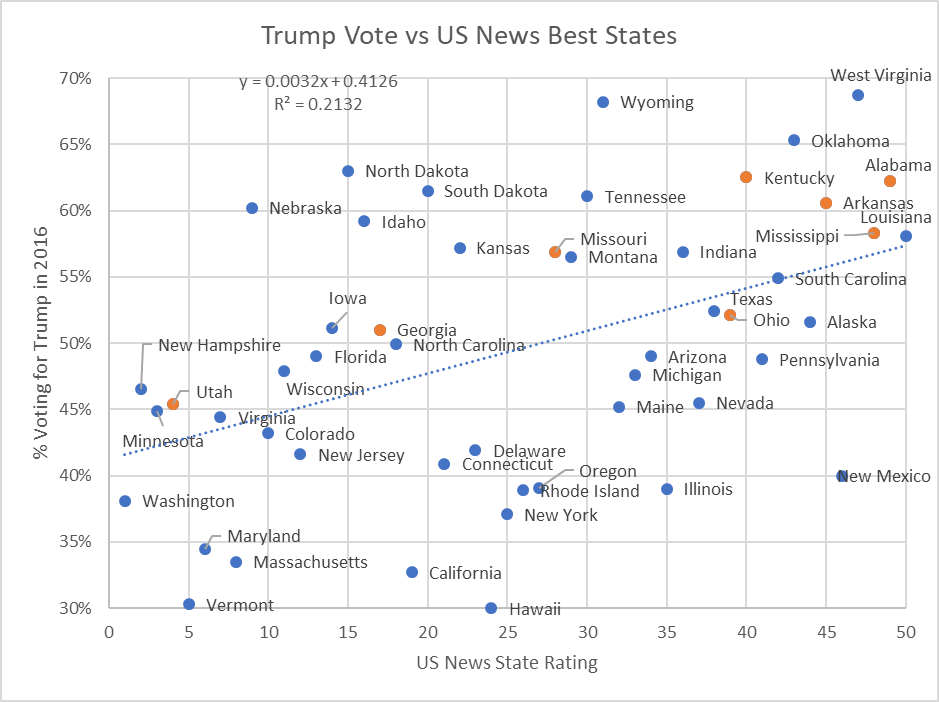 Although there is a relationship, particularly at the extremes, the states with a heavy Trump vote or a very light one, one should be very cautious about assigning any causality to these results. There is a huge amount of scatter, particularly in the middle regions. There is no guarantee that Democratic domination will lead to better outcomes in the case of any state.

Eight states have passed laws this year tightening the restrictions on abortion—or in some cases outlawing it. These states are shown in red in the chart above. Again, there seems to be a relationship between bad scores and an eagerness to use government to override personal decisions. But most of these states are in the South, suggesting that the connection may be a cultural one.

Finally, there is the question. If one believes WalletHub that Wisconsin is the 4th best state for millennials, why has it not been more successful at attracting them? At some point, the cause of Wisconsin’s weak record of creating jobs switched from low demand for workers to low demand by workers.

Over the past eight years, when Wisconsin appeared in the national news it was for measures that shifted the balance of power from labor to capital. To some, it might have appeared that Wisconsin was becoming Alabama or Mississippi. The two state ratings, however, suggest that there are still major differences between Wisconsin and southern states.