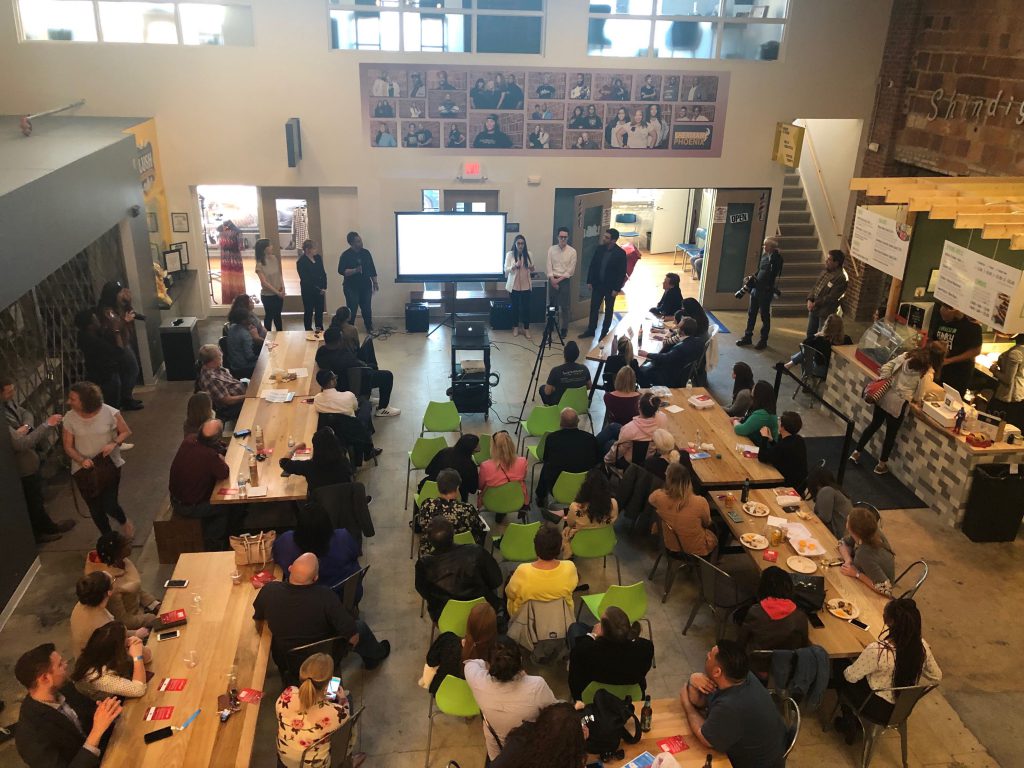 The Big Impact at the Sherman Phoenix. Photo by Jeramey Jannene.

A group working with the Historic Mitchell Street Business Improvement District won a pitch contest Wednesday evening as part of NEWaukee‘s YPWeek. The group, part of a civic accelerator program, will receive $5,000 in seed funding to experiment with converting the surface parking lot behind the shuttered Modjeska Theatre into a park for area residents.

The Mitchell Street group and two other teams pitched their ideas as part of NEWaukee’s The Big Impact series. In addition to Mitchell Street, groups working with the Granville Business Improvement District and Near West Side Partners shared concepts for neighborhood improvement.

The groups made their pitches at the Sherman Phoenix to a group of approximately 120 attendees who paid $25 each to attend the event.

The attendees, after listening to seven-minute pitches from each group, then voted for their favorite, with 100 percent of the ticket proceeds going to the highest vote getter. Concordia University Wisconsin pitched in extra funding to bring the first place award to $5,000, as well as awarding $1,000 and $500 to second and third place.

The participants in the program, known as Co:Lab, came from the outreach networks of NEWaukee, The Commons, Concordia University and participating business improvement districts. Applicants to the civic accelerator program were paired with business improvement districts to look at identifying and addressing problems in the commercial districts. A previous version of The Big Impact featured established non-profits pitching programming efforts.

In their pitch they explained that the neighborhood lacked play space for families. Kosciuszko Park was identified as being too far away. Their proposal was to redevelop the Modjeska Theatre, which was recently put up for sale, as a community center with indoor play area. A rock climbing wall would be installed on a portion of the former stage, which would be unified with the rest of the theater space to form a large multipurpose room. The lot behind the theater, long used for parking, would be redeveloped as a green space.

The group intends to use the funds to support trial programming on the park space and advance further planning for the theater’s potential redevelopment.

The Granville group envisioned a talent attraction strategy targeting workers of all backgrounds for the area around the former Northridge Mall, while the Near West Side Partners group pitched a community workshop space near Harley-Davidson‘s corporate headquarters along N. 35th St.

The event was supported by Concordia, the We Energies Foundation and Wells Fargo.

Jeramey Jannene serves on the advisory board of NEWaukee.