Walker’s Costly War on the Poor 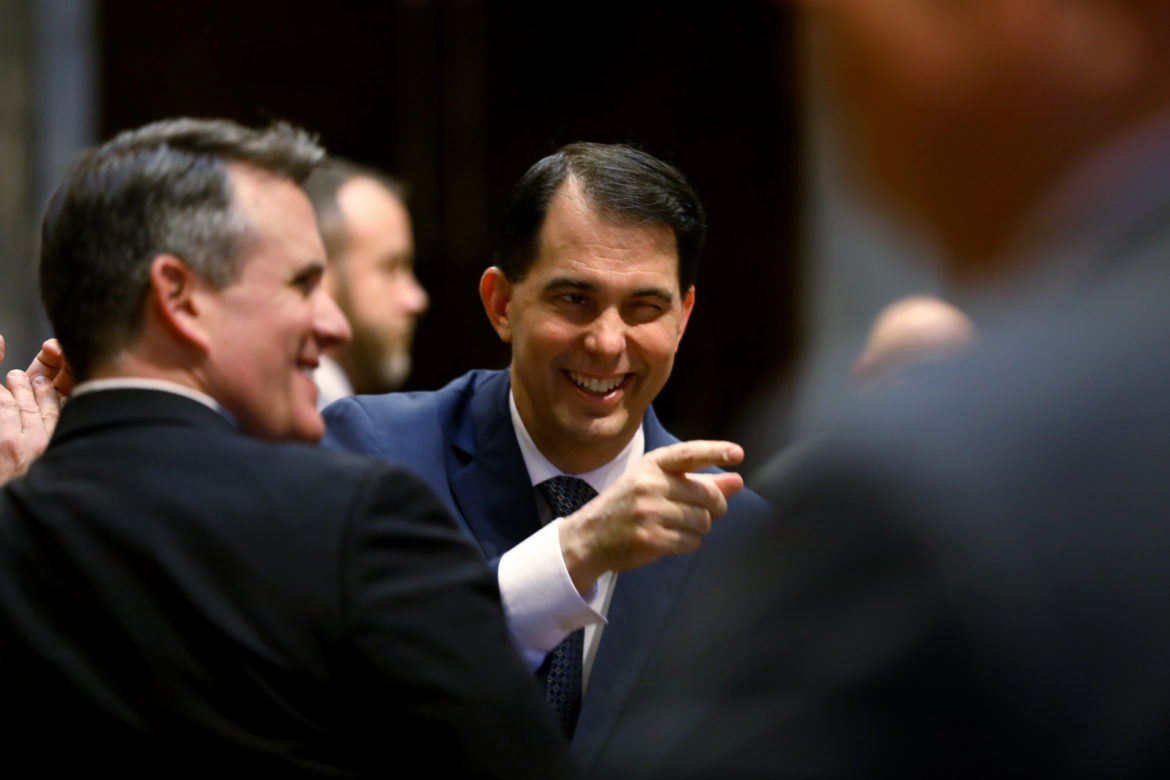 It was back in 2015 that Gov. Scott Walker and Republican legislators implemented a law that disqualified any able-bodied adult without children who works less than 80 hours per month from the federal Supplemental Nutrition Assistance Program (SNAP). The new policy cuts off their food assistance if they have not worked for a cumulative total of three months during a three-year period.

The theory behind the law — that this would push people to get a job —seemed suspect. Walker and Republican Assembly Speaker Robin Vos were arguing that giving a person $123 per month or $1,476 per year to spend on food makes them so comfortable that they won’t look for work. As though someone could actually live on this amount of money. This seemed to ignore the reality of poverty, where the working poor often shuttle in and out of low paying jobs, or work off the books in the underground economy. Cutting off their SNAP benefits if they failed to work during just three of 36 months would only worsen their plight.

Ah, but this loss of money would all be worth it, we were told, because it would provide training to SNAP recipients to get better jobs. The program should operate as “a trampoline, not a hammock,” Walker declared, conjuring up a vision of the undeserving poor living a life of ease on their princely SNAP benefit of $1,476 per year.

So just how well has Walker’s trampoline worked? A non-profit publication called The New Food Economy has done an investigative story by H. Claire Brown examining the program and its “analysis of hundreds of pages of documents, interviews with former caseworkers, program participants, advocates… revealed that one of the companies hired to manage Wisconsin’s expanded work requirements has repeatedly fallen short of expectations. Statewide, the program is expensive, it doesn’t find jobs for most people, and its practices have violated participants’ civil rights on numerous occasions.”

Wisconsin’s FoodShare Employment Training Program was supposed to train SNAP recipients, but the results show most never got that trampoline. According to state data made available in November 2018, “more than 83,000 people have enrolled in the program since April 2015. Less than 29,000 have found work,” the story reports.

And the average wage for the minority of participants who did get jobs “was $13.43 an hour, for an average of 36 hours per week. That amounts to about $25,000 a year. At that income level, many people are still eligible for food stamps,” Brown reports.

Yet this program that failed the vast majority of participants “cost taxpayers $283 per enrollee, per month. That’s more than double what the average SNAP recipient received during the same time period and nearly twice what the Walker administration predicted it would cost,” according to an analysis by the nonpartisan Legislative Fiscal Bureau, as the story reports.

Meanwhile the private company hired to provide this training, ResCare, was repeatedly found violating federal law. Investigators with the U.S. Department of Agriculture, which oversees SNAP, “examined ResCare’s activities in Milwaukee twice, finding multiple program violations both times, including (among others) a failure to interview clients, violations of participants’ civil rights, and failure to reimburse participants for childcare expenses—a requirement of the program,” the story reports.

ResCare offered a “one-size fits all” program that helped enrollees “write resumes and fill out job applications, and provide classes that teach new skills,” the story notes. The state’s funding gave ResCare a five percent, performance-based bonus as an incentive to get recipients jobs. “But, apparently unable to set meaningful benchmarks,” the state Department of Human Services “ended up granting nearly every vendor the full 5 percent bonus,” the story reports. By contrast, a similar state work training program (for W-2) bases 70 percent of its overall vendor funding on the program meeting its goals.

The Legislative Fiscal Bureau report argued that vendors like ResCare “should provide adequate services regardless of bonus structure,” the story notes.

Sherrie Tussler, executive director of Hunger Task Force, questioned why a private company like ResCare, with a long history of problems in other states where it was hired, was being used for training rather than Milwaukee Area Technical College. “We have this… technical college system that has a 97 percent job placement rating after you earn whatever certificate or degree,” Tussler told the publication. “Why wouldn’t you fund your own state institutions before you would pick these out-of-towners who are for-profit?”

One employee who worked at ResCare offered the publication an insider’s view of how badly the program worked. “The phone numbers [for recipients] were often disconnected or wrong.” And when ResCare workers did manage to get in touch with people, “a lot of them simply didn’t believe that ResCare—an unfamiliar private company claiming it controlled their access to food benefits—was the real deal.” Only 24 percent of the people referred for training ultimately joined the program, according to the LFB analysis. “Many of the rest likely lost their benefits,” the story reports.

ResCare’s workers were supposed to give recipients a questionnaire asking “whether they had ever been addicted to drugs, whether they had a family history of mental illness, and whether or not they were homeless… some people were so offended by the questions that they refused to continue the enrollment process,” Brown reports.

This was a violation of civil rights law, including the Americans with Disabilities Act, federal USDA investigators found. “Prospective employers aren’t allowed to ask about drug abuse in the distant past or housing status before they make a formal job offer,” Brown notes.

The USDA found many other problems with the program that caused delay or made it harder for recipients to succeed. And all this occurred under a tight timeline as “each delay counts against the three months every three years during which they can receive [SNAP] benefits without working,” Brown notes.

ResCare, which changed its name to BrightSpring Health Services last year, still operates some of the training programs in the state but it was removed as operator of the Milwaukee program, which was found to have so many problems. The company was replaced by Maximus, another for-profit company with a history of poor performance in various states.

Maximus currently has a contract to run Indiana’s work programs for SNAP and the Temporary Assistance for Needy Families (TANF). “In that contract,” a story by Mother Jones reports, “the company estimates it will see 93,000 clients and earn about $9.1 million each year. But it expects fewer than 200 people annually will find and keep jobs for at least six months.”

The program continues in Wisconsin and is something of a model for the administration of President Donald Trump, whose Department of Agriculture has proposed a rule whereby 2.8 million able-bodied adults without dependents would become subject to work requirements in order to maintain their eligibility for SNAP benefits.

“The proposed changes would take food assistance away from Americans struggling to find stable employment while doing nothing to help them to actually become permanently employed,” the letter from the senators noted. “This is contrary to Congressional intent, evidenced by the passage of the Agriculture Improvement Act of 2018, which rejected similar harmful changes to SNAP and passed Congress by a historic vote of 87-13 in the Senate and by 369-47 in the House of Representatives.”

Baldwin and Milwaukee’s Democratic Congresswoman Gwen Moore have also opposed the program in Wisconsin since Walker first proposed it. The program is “not the product of analysis or sound policy making,” Moore says. “If supporters of these work requirements actually wanted to help poor people access employment opportunities and gain stable jobs, they would eliminate the actual barriers to work for poor and working-class people, like the dearth of public transportation or access to affordable childcare, and not erect new barriers to accessing public assistance.  As shown by the experience of Rescare in Milwaukee County, punitive work requirements fail the people on the program that they are supposed to serve and they fail society at large.”

Wisconsin’s Department of Health Services did not respond to requests for comments from the reporter for The New Food Economy and is now run by a Tony Evers, a Democratic governor who has inherited a long list of Walker policies and programs he may want to change. This program is clearly one that needs some serious rethinking.

One thought on “Murphy’s Law: Walker’s Costly War on the Poor”