But area alderman Bob Bauman is likely to oppose project.

Developer Charles Bailey has updated the design of his proposed downtown hotel, adding a living wall, in response to feedback from neighboring property owner Don Arenson.

Bailey is proposing to add three floors to the top of the four-story story building at 602 N. Broadway and convert it into a 45-room hotel known as the Kinn. The current proposal, which was held by the Historic Preservation Commission on April 1st for further review, is two floors shorter and 17 rooms smaller than what Bailey had originally proposed.

“It’s still a 30-foot wall next to my building,” said Arenson at the commission meeting about the revised proposal. Arenson owns the two properties immediately north of the site.

Arenson believes the hotel would negatively impact his properties’ value, in part because the expansion would rise three stories over his attached property. The expansion would block the southern view from Arenson’s rooftop deck.

The adjoining buildings were originally built as one structure, the Lawrence Block, in 1868.

No windows or ornamentation were originally planned as part of the wall on the expansion’s north facade. Project architect John Vetter said windows were excluded at Arenson’s request to maintain privacy on his deck.

But a new proposal, submitted to the commission, envisions building the otherwise blank wall as a living wall with vertical plantings and brick columns for two levels. The top level, which is planned as a bar, is smaller and would contain “Kinn” signage on a darker material.

While the matter was held at the last commission meeting, in part because of an hours-long hearing involving the Marcus Center, multiple commissioners expressed support.

“It seems like the value of your property would go up,” said Commissioner Matt Jarosz at the meeting.

“I like it. It’s a nice addition to the neighborhood,” said Commissioner Patti Keating Kahn. She owns the nearby Railway Exchange Building and said the commission would have a tough time rejecting the proposal given that it accepted the hotel tower addition to the Humphrey Scottish Rite Masonic Center.

Architect and philanthropist David Uihlein, who owns the McGeoch Building immediately east of the proposed hotel as well as a building across Broadway, originally submitted a letter in objection to the proposal. Uihlein singled out the “opaque and unfenestrated north facade” as setting a bad precedent. He did not testify at the April 1st meeting, having left before the matter was heard.

The next Historic Preservation Commission meeting is scheduled for May 6th.

Commissioner and area alderman Robert Bauman isn’t likely to support adding highly-visible floors to the top of the building.

“I am highly reluctant to allow that penthouse,” said Bauman in an interview with Urban Milwaukee. “I think that is one of the most unique blocks in the entire City of Milwaukee.”

Bauman compared the block to the 700 block of N. Milwaukee St., which was restored without rooftop additions. “Not every old building needs a new addition on the top,” said the alderman. A number of restaurants and bars occupy the first floor of buildings between E. Wisconsin Ave. and E. Mason St. The upper floors contain a mix of uses, including office space, salons and night club.

“The initial proposal, at five stories, I almost fell out of my chair,” said Bauman. “I thought that absolutely looked awful.” He said he could support an addition that wasn’t visible from the street, such as have been done in a handful of cases in the Historic Third Ward.

“I think that block is so important, so critical, that it should be left exactly intact,” said Bauman. “I’m sure I’ll get blasted for that. That’s fine.” The preservation advocate noted that the building hasn’t been sitting vacant and had a law firm as a tenant until recently.

Bauman told Urban Milwaukee that modifying the design of the wall doesn’t change his opinion on the project.

The commission has oversight over the project because it sits within the East Side Commercial Historic District. Other recent projects in the district include developer Joshua Jeffers‘ Huron Building, for which construction is imminent, and Jeffers’ redevelopment of the Mackie Building. Jeffers would sell the building at 602 N. Broadway to Bailey as part of the hotel proposal.

For more on the proposal, see our coverage from March. 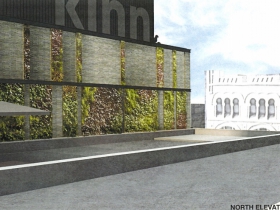 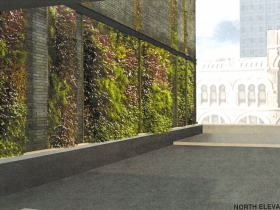 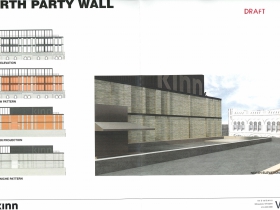 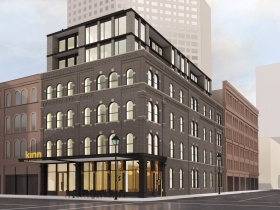 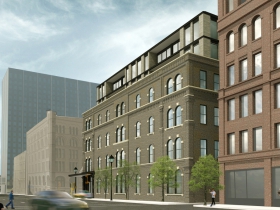 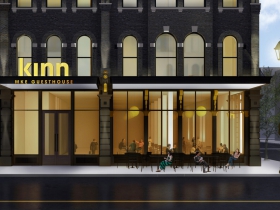 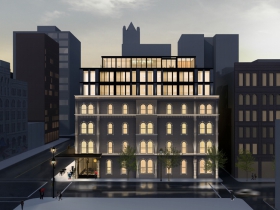 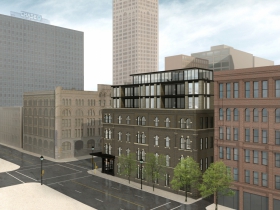 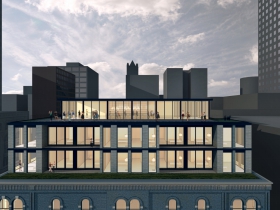 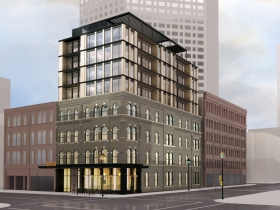 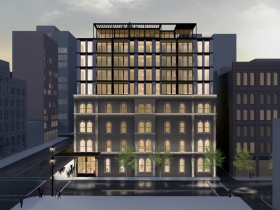 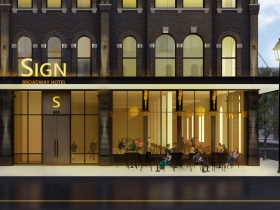 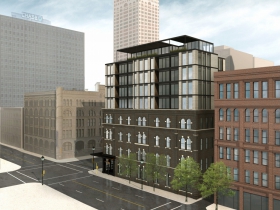 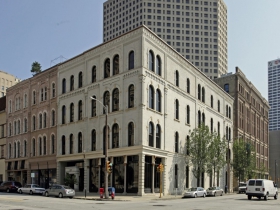