Editor’s Note: the conclusions in this story are erroneous, and based on a misreading of the city’s changing number of registered voters. You’ll find the correct information in this story.

Lisa Neubauer easily beat opponent Brian Hagedorn in Milwaukee County, taking 62 percent of the votes in their contest for the State Supreme Court.

But a poor turnout in the City of Milwaukee hurt Neubauer, handing Hagedorn the lead in a tight race that will likely end in a recount.

The turnout was fairly high in Milwaukee County: 29 percent vs. 26 percent statewide. That should have helped Neubauer as big turnouts in the county generally help more liberal candidates, and Neubauer was seen as well to the left of the very conservative Hagedorn.

But the city of Milwaukee’s turnout was a dismal 22 percent, which meant a lower turnout for the more liberal city and higher turnout for suburbs, most of which are not as liberal as the city.

Fewer than 10 percent of voters turned out in 50 of the city’s 327 wards, the figures show. The highest turnout in Milwaukee was 50 percent in Ward 300, just north of St. Francis on the city’s far South Side.

Shorewood had by far the biggest turnout, with more than half – 53 percent – of all voters turning out. Shorewood went big for Neubauer, who won a whopping 83 percent of the votes — by far her biggest win in the county. In Milwaukee, she was backed by 73 percent of voters, her second-biggest margin in the county. She also did well in North Shore suburbs, as the chart below shows.

But Neubauer lost in Franklin, where she received only 39 percent of the vote. She also lost in Greendale (45 percent), Greenfield (44 percent), Hales Corners and Oak Creek (41 percent each), South Milwaukee (48 percent), and West Allis (47 percent). 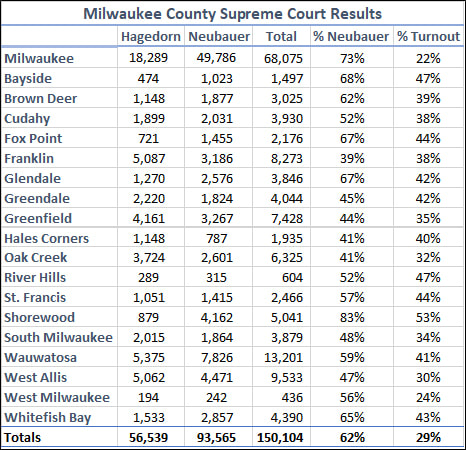