Depending on their race, women earn anywhere from 55% to 78% of what white men earn.

By Tamarine Cornelius, Wisconsin Budget Project - Apr 2nd, 2019 01:28 pm
Get a daily rundown of the top stories on Urban Milwaukee

April 2 is National Equal Pay Day, which marks how long women have to work into this year to catch up to what men earned in the previous year, on average. Women of color must work even longer into this year to bring their 2018-19 earnings up to the same level as men’s earnings from last year. Race and gender-based pay disparities devalue women, especially women of color, and rob them of opportunities to achieve financial security and establish wealth.

Workers shouldn’t pay a penalty for being female or of color. But in Wisconsin, women – and especially women of color – are paid significantly less than white men. A Hispanic woman in Wisconsin is paid just 54.7¢ for every $1 a white man is paid, on average. Black women are paid 60.3¢ on the dollar, Native American women 64.3¢, Asian 70.4¢, and white women 78.9¢ for every dollar earned by a white male worker. 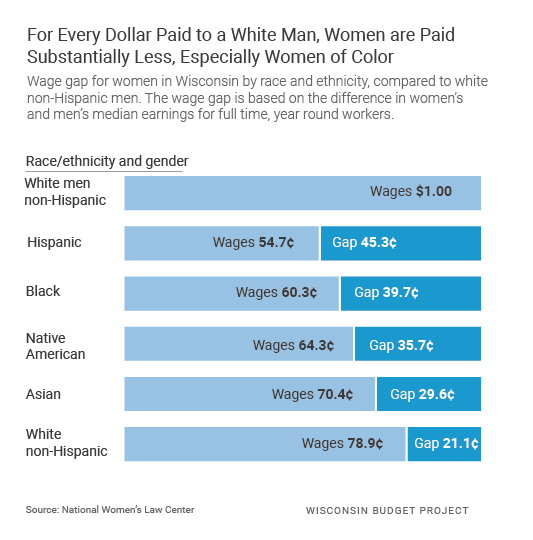 For every dollar paid to a w white man, women are paid substantially less, especially women of color.

It isn’t just one hour, one day, or even one year that women are paid less than their worth. It’s a lifetime. When the amount that women are underpaid every day is added up, the amount accumulates to a staggering figure. Over the course of a 40-year career, Hispanic women working in Wisconsin are underpaid by $942,000 compared to white men. Women workers of other races also have their work undervalued by hundreds of thousands of dollars. 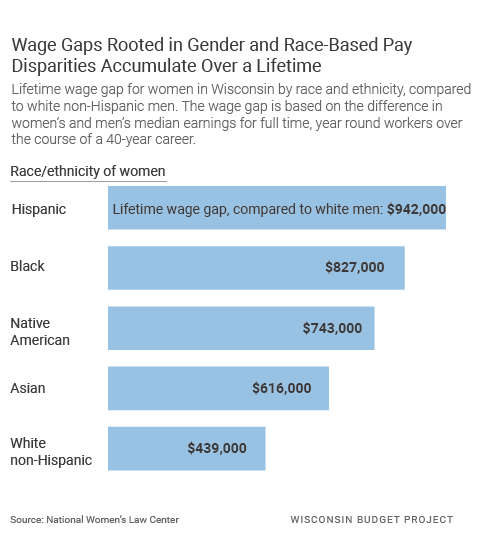 Wage gap rooted in gender and race-based pay disparities accumulate over a lifetime.

Women workers in general and women workers of color in particular are over-represented in the low-wage workforce and under-represented in the high-wage workforce. But whether they work in low-wage or high-wage occupations, women are typically paid less than men in the same situation. In low-paying occupations like cashiers, home health aides, and janitors, as well as in high paying occupations like lawyers, engineers, and surgeons, women earn less than their male counterparts.

When women lose out we all lose out. Narrowing the pay gap is an issue that everyone should take up because it improves and allows children and families to have a better chance at thriving. There are steps we can take to move Wisconsin closer to a state that fairly compensates women workers in general and women workers of color specifically. Governor Evers has included some changes in his budget proposal that would move us toward this goal, including: