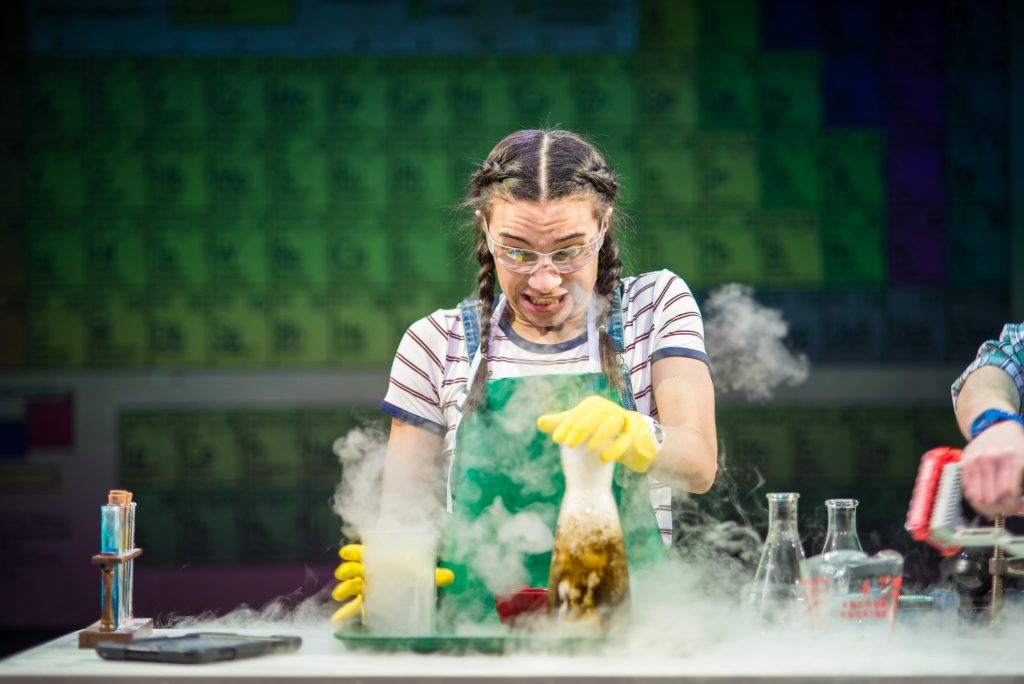 The alien from outer space looks like a flirty teenager shopping at the mall. She constantly toys with her curly hair, rolls her eyes, smirks with hidden superior knowledge and lands putdowns just like the mean girls at high school do.

Althea, as she likes to call herself, is one of the inventions of Annie Jump and the Library of Heaven, a play that starts lively and then crashes into a ditch of mawkish scenarios and uncertain conclusions. It was smart to make the alien look like one of the most ridiculous of us — except after that the underlying core loses power.

The dual element title seems a mouthful and actually exposes the split purpose of this world premiere, staged through April 21. It’s about Annie Jump, a nerdish but brilliant 13 year old whose scientist father fails to stay on his meds. But the Jumps love each other and the rural night sky that is free of urban lights in her hometown of Strawberry, Kansas. It is that deeply black sky that is a window into the library of heaven – second half of the title — that awaits her future in an awesome full-screen projection before our eyes.

Annie Jump rose out of Renaissance Theater’s new play development program in 2014 and has scheduled performances at other regional theaters. It fits right into this year’s science theme for the company and represents the first full production from the new play program.

Playwright Reina Hardy has a stronger ear for dialogue than for play construction and a sly handle on how to make stage fodder out of science and young dreams. We need more new playwrights to take risks on established forms. So she should be encouraged, as she will be with other plays and productions around the globe. But her ideas and dialogue slip into an all-too-common take on people and issues.

Patrons will better appreciate the play’s natural attractions now that opening weekend has passed. That was when friends and familiars seemed to dominate the small studio theater at the Broadway Theatre Center and tilted the experience. The charm in the repartee was hard to appreciate among the guffaws.

Renaissance director Pam Kriger integrated so many good talents in the technical areas that it is hard to know who to credit. The consistently spectacular atmosphere stems from such names as tech director Anthony Lyons, set and lighting designer Jason Fassl, sound designer and composer of the eerie planet music Josh Schmidt, with props and costumes from Jordan Stanek and Misti Bradford.

The rear projection system makes us appreciate the beauties of the universe but is also used by the playwright to crack contemporary jokes. REDACTED floats across the screen as often as it does these days on cable news. Lab experiments create sparks, controlled smoke and audience attention. The vivid presentations keep us occupied even as the plot devices sag.

Althea has been sent – or so it seems – to help the brightest nerd in rural Kansas decide her future. Reese J. Parish, a theater experienced student at Nicolet High, plays Annie with an inner confidence and determination. Though directed toward broad strokes in line delivery, there is an honest concentration underneath.

Rachael Zientek shows smart timing as the constantly primping Althea (who is also a super-computer), a role that relies on exaggerated teen mannerisms and a sense of the comedic. The lack of variety in her behavior, however, becomes annoying.

The script intends everyone to overdo it, and those orders sure do in Jarrod Langwinski as the goofy student Lothario. There is an experienced actor on hand, Jonathan Gillard Daly, who tries to find the human chords within a fatherly stereotype that has him ranging from over-exuberance to catatonia.

Annie Jump and the Library of Heaven Gallery 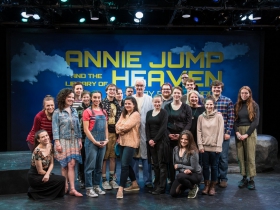 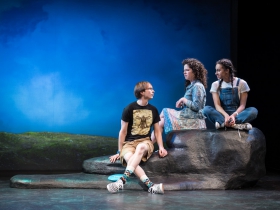 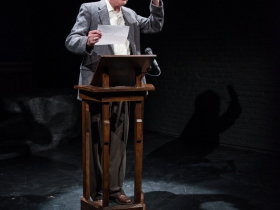 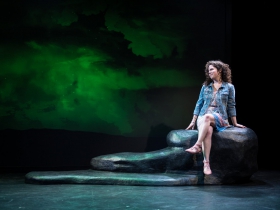 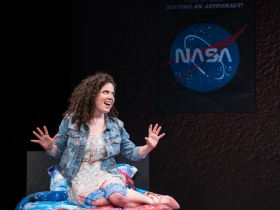 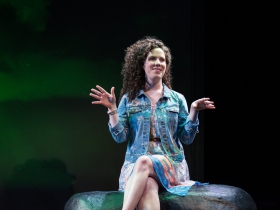