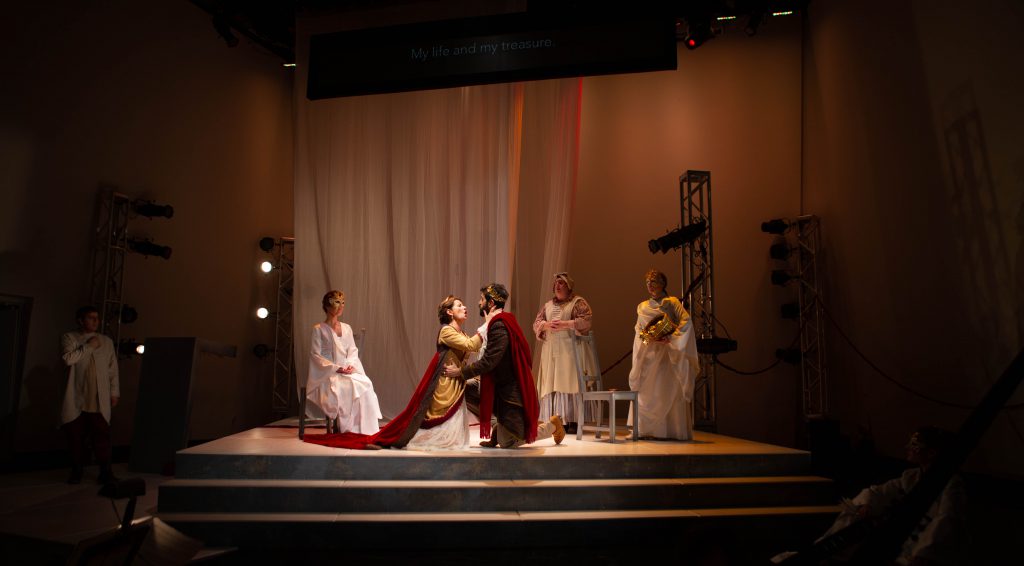 The rubbing together of male and female bodies. The tangled sighs, the agony of infidelity, the intimacies of human voices wrapping around each other. These are not the first things you think of when the Florentine Opera announces a 17th century Baroque opera with a few stringed period instruments in the small Wilson Theater at Vogel Hall of the Marcus Performing Arts Center — quite a change from the cavernous Uihlein Hall where the company normally pitches its tent.

You could argue that sensuality is built into Claudio Monteverdi’s The Coronation of Poppea, which in the past was performed by castrati in the lead male roles and later by women singing the higher male roles. The grand emotions of the baroque style, the exaggerated poetic phrases (in Italian with florid English supertitles) and the hyper melodic recitatives certainly convey an excitable even neurotic level of passion and torment.

With meticulous precision, the conductor, revisionist and harpsichord master Jory Vinikour brings a thoughtful anchor to the melodic construction and pace. But especially important was the staging vision of Robin Guarino with her simpatico team of designers (all women as the program notes).

The setting is an elegant separation of chairs, lighting towers, see-through white curtains and blood-red yarn to isolate the costumes and the characters in revealing tableaus. The players enter and depart almost in stately slow motion – a deliberate contrast with the opera’s flood of libido.

The hardest thing in directing such historic operas is keeping the characters believable while handling the repetitive lyrics, elongated vocal lines and musical phrases. These realities force the singers to hold the emotions and sensuality longer than they hold the notes and longer than is natural.

Working with excellent lead singers who can act, Guarino tackles the issue head on, expanding and sustaining the cast’s responses within the music, working moment by moment, probing for new ways into the high emotion.  Not a pant of lust nor a tremble of grief is missed. Her choices are not just intelligent but entertaining.

Of course as the opera goes on and the plot gets so melodramatic and complicated, this quality of believability can’t be maintained. Though well sung by bass Matthew Trevino, whose deep notes thrilled the house, the death ritual of philosopher Seneca goes on way too long and probably shouldn’t have been highlighted so rigorously. Old-fashioned staggering around – an operatic technique to handle the musical interludes —  interferes with the efforts to freshen stereotypes and keep a high level of interplay.

I have emphasized the staging, but if the quality of the imported singers is what brings in most Florentine patrons, they will not be disappointed by the production (through March 31, an unusual two weekends of performances).

There is star acting from mezzo Amanda Crider as Poppea. She is not just  fetching in her seductive manner and sly power to corrupt, but potent in her crystalline voice while also melding so exactly with an elegant tenor, Karim Sulayman as Emperor Nerone. Their duets – yearning and playful –  are a centerpiece.

As the spurned lover and would-be assassin Ottone, Nicholas Tamagna is an impressive and effortless countertenor, providing a fascinating sound contrast in a production rich in high male voices. Another notable tenor is the cross-dressed clown maid, Marc Molomot. Aside from amusing solos, he ranges from comic wailing to exceptional serious anchoring of chorales.

Another fine voice is mezzo Katherine Pracht, powering from a tabletop the outrage of Nero’s rejected queen Ottavia. The rest of the cast – Melissa Harvey, Nathaniel Hill and Nicole Heinen – responds sensitively to the demands of multiple roles.

Sometimes I worry that Florentine patrons think the lesser operas are relegated to Wilson Hall rather than the more familiar Uihlein Hall. But this 366-seat venue allows more intimate instrumentation (not a full Milwaukee Symphony) and a more interactive setting. The sound sweeps over the patrons better in the Wilson and this production took time and care to reach into and grab the audience. It is certainly not lesser, just a different way to absorb opera, as this Poppea proves.

One thought on “Classical: Sex in the Roman Empire, Well Sung”