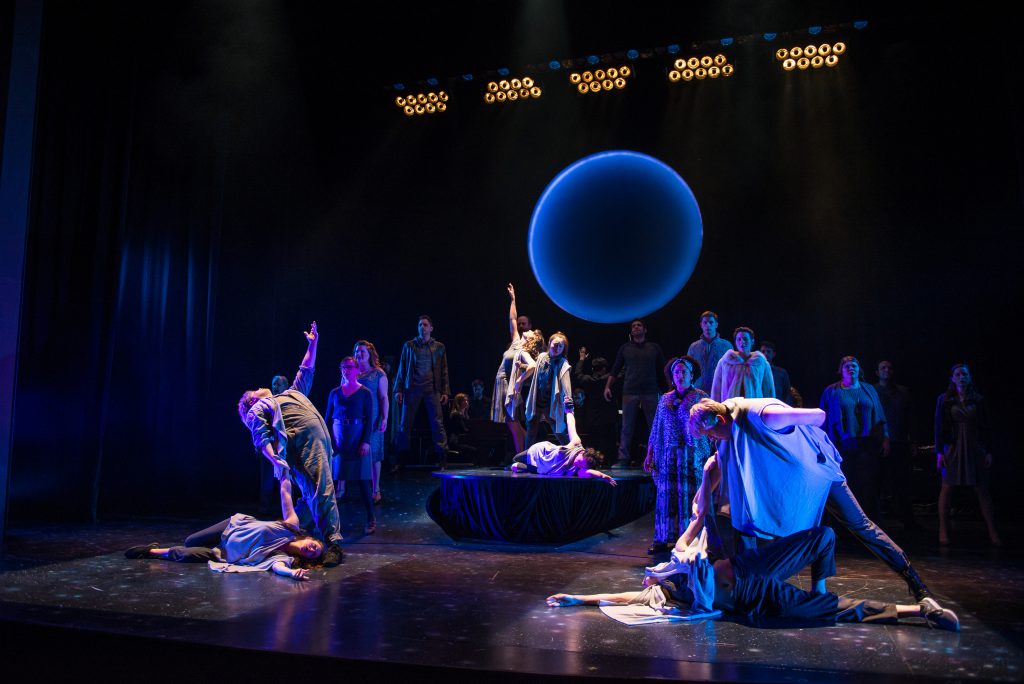 The most original, mesmerizing and nakedly daring theatrical experience of the season is Carmina Burana at the Skylight’s Cabot Theatre through March 31, but you would be shouting and stomping your feet in vain to applaud for the author of the script.

It is based on an anonymous poem cycle from medieval times, written in such dead languages as scholarly Latin and middle German, performed with only the scantest translation in your program. It is rarely sacred, often dark and earthy, sometimes profane in the old pagan sense of the word, built around Fate’s Wheel of Fortune and the changing cycles of the seasons, love, birth, carousing and death.

The production spins us round and round with modern dance, art songs, pantomime and a giant moonlike orb that operates like a water globe. An invisible shake of the globe produces an episode title, or beads of rain or flowers as the scene setting requires. Underneath this giant moon the ground shakes from timpani, two pianos and multiple percussions. Singers and dancers flood the stage and more choir voices are hidden in the upper balconies of the theater.

The composer is Carl Orff (1895-1982) who 80 years ago in Germany may have envisioned his “scenic cantata” as a mixture of dance, song, visual art and theatrics. But his idea languished while the world treated his music as orchestral and later as the perfect fodder for hundreds of movies, dozens of stage productions (I was in one in the 1960s) and even TV commercials. How unusual to see his multimedia fantasy come to fruition in little old Milwaukee.

It could be hard to name the artistic leader here though I highly suspect stage director (and head of Milwaukee Opera Theatre and an associate director at Skylight) Jill Anna Ponasik. But right after that I have to add Danceworks’ artistic director and inventive production choreographer Dani Kuepper, so seamlessly has the modern dance been married with the singing, mime and acting. And then there is music director Janna Ernst and Chant Claire Chamber Choir’s Benjamin Bedroske, who is also the stage conductor.

Amazingly we never feel the absence of a full orchestra. Most people have only heard Carmina Burana from a movie soundtrack or a full orchestra and a Mormon-Tabernacle-sized chorale, but this production employs a smaller force. Yet they not only magnify the throbbing pulse of “O Fortuna” (the famous opening that combines magnetic almost African rhythms and classical crescendos) but also the delicate interweaving of duets, solos, love songs and poetic interludes that carry the fortune wheel back and forth.

That brings our praise back to the entire ensemble of some five dozen artists, including scenic artisans, who have collaborated on a truly unusual and thoroughly enjoyable experience.

There were no outlined stage instructions for Ponasik – the ultimate leader — to follow. She just elaborated and refined into interlocked adjacent images. There was no blueprint for the spats between soprano and tenor she arranges, the missives floating from the sky, the near falsetto tenor playing with a hefty cross-dressed dancer, the parade of women going from pretty young to pretty old as they look into a dressing table mirror, the scarves and the rings around the Rosie, the pregnant mother showered with gifts, the poetic death leading into final revelry.

There is mammoth invention of illusions to keep the enormous cast wheel turning. Occasionally, some of the mime sequences falter into cuteness, but otherwise there is astounding depth and coordination. In fact, the coordination of such diverse elements is particularly noteworthy, because without a stern hand or two at the helm such a leap into the unknown could not be maintained.

I counted five young performers around age 11 contributing either song or movement, carefully used for the joys of spring and hope and invisible for the bawdy tavern scene. There were seven from Danceworks to whirl in arabesques or claw like crabs, plus a choir high in the balcony as well as onstage, plus a dozen accomplished singers, many of whom had duets or solos.

I could mention the swarthy tenor work of Tim Rebers or the high notes of Cecilia Davis or the dance extensions of Christal Wagner. But then it gets to the point of being unfair to pluck out one or two, since I found so many commendable.

But I have to mention the scenic design, including that orb, by Lisa Schlenker. And I can’t single her out without commending how costume designer Shima Orans integrated street clothes with flowing dancing  gowns. Or how deft were the lighting punctuations by Jason Fassl, almost drumbeats of their own.

It’s important to realize that you only have March to catch hold of this wheel of O Fortuna. The best of live theater is fleeting and this one won’t come your way again. The number of participants is massive, the rehearsals have clearly been intimate coordinating of the leaps on and off the stage and the cycles of interplay, some of which can still be more deeply realized. The duets are carefully conceived and acted as in the best of modern  opera. There is an esprit de corps that exists within the confines of the Cabot Theatre. Someone may try to capture this on YouTube or even on public TV and it will look flat.

This is both the joy and sadness of such total theater. It is ephemeral. You have to be there and look past it as well as into it. The company will not even know until months later what a special time they were part of. 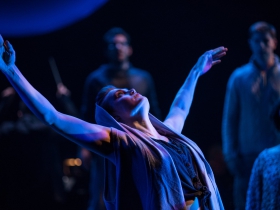 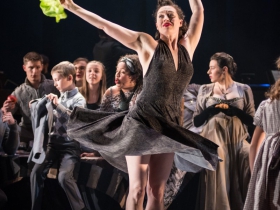 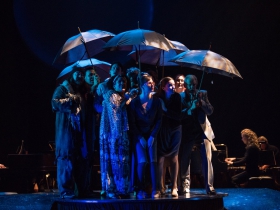 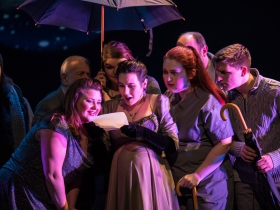 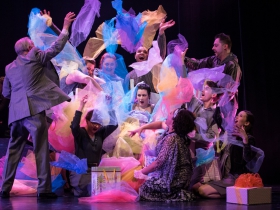 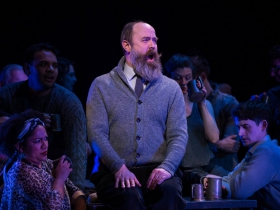