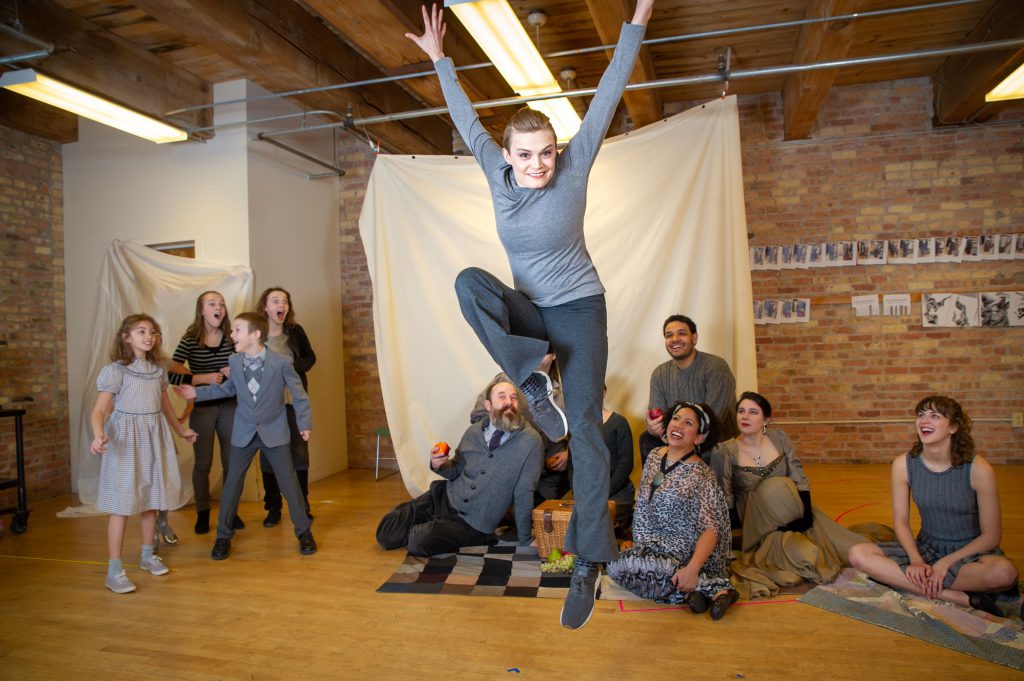 In art, there are times a recipe just doesn’t quite cut it. Sometimes you’ve got to mix it up or add more flavors.

Carmina Burana is an exactly that sort of collaboration, blending the talents of Skylight Music Theater and Danceworks Performance Company, along with the Chant Claire Chamber Choir and the Milwaukee Opera Theater. These four organizations are working to re-conceive the Carl Orff musical masterpiece for the Skylight’s intimate 358-seat Cabot Theater stage.

Creating music based on 24 poems from the collection of Carmina Burana, Carl Orff created a work that has impressed classical music audiences since 1935. Orff always envisioned his piece to be more theatrical with stage movements.

Skylight director Jill Anna Ponasik got Orff’s message. “It’s a musical setting of poems,” Ponasik says, “believed to be from the 11th through 13th centuries. The cast will sing in the original language of the pieces.” The production will utilize Wilhelm Killmayer’s arrangements, which Orff approved.

“We’re exploring what we have in common with the people who wrote these texts,” Ponasik said. The show consists of 25 musical sections, none longer than four minutes in length, each relating to the turning of fate’s wheel and the unpredictability of the human condition. Carmina Burana touches on the full scope of existence from birth to death, joy to despair, and everything including love, fear, the seasons and the moon.

Ponasik’s directs 62 performers in all, including a dozen singers, five children from Skylight and Milwaukee Opera Theater; four featured vocalists and 25 members of the Chant Claire Chamber Choir; seven dancers; and a musical ensemble of two pianists and six percussionists performing Killmayer’s arrangements.

With an ensemble of this size, Ponasik said at times it can be like corralling cats. “It’s a great adventure figuring out how to do it, weave our talents together,” Ponasik says. “We’re presenting visual movement that will correspond with musical. We’re working with Dani Kuepper and her Danceworks Performance Company dancers to make that happen.”

A presentation of this magnitude requires a little convincing at first. “You have to talk people into saying ‘yes,’ agree to a production like this,” Ponasik says. “You have to make the project sound like it’s going to be worthwhile, fulfilling, complimenting the unknown. It seems the timing is right.”

In particular, Ponasik, notes, “I was so worried it wouldn’t be the right fit for Danceworks. You never want them to say no. We try to work together every other year. In every single project we’ve been bringing dancers and singers closer together. Learning and growing together.”

Ponasik says she’s always wanted to do a project like Carmina Burana.  “It’s been a pleasure watching people who have worked so hard to become specialists–whether it be opera or choral,” Ponasik says. “With people who have dedicated so much of their lives to be good at something. I get to watch them work together, bond and become a cast.”

Watching performers get overwhelmed — in a good way — has been one of the joys for Ponasik with this production. “Our youngest performer is nine and the oldest in their late 70s,” Ponasik says, “it’s an intergenerational team.”

The Cabot Theater is a kind of intimate opera house and Ponasik says the size of the stage can make a difference in how a show is presented, especially when you’re adapting a story. “You have to stay in step with the possibilities in the space as opposed to feeling restricted,” Ponasik says. “For the Cabot Theater you’ve got to make some obvious adjustments. A full symphony won’t fit and some things can’t happen. We have scaled it down to six percussionists and two pianos. No strings and no wind instruments.”

The manuscripts upon which the poems are based were discovered at a monastery There are more than 250 poems in the book. The thought is that they were written by monks, secular texts tucked in between and around other writings.

“I’ve asked myself what we may still have in common with those texts, what aspects of human beings have changed,” Ponasik says. “Writings that has led us to this emotional world. I don’t think we need to be pushing the boundaries with this production, I don’t think of it as though we have to adapt it to bring it into this century.”

Ponasik says she knows it sounds like a cliche, but she’s never felt more supported by a stronger team of performers. “From production end of things. I’m grateful for the team we have, overall it marks some artistic growth for me. It’s definitely less frightening when you make something joyfully with colleagues. We get together and talk about music, the language of motion. I can’t predict how people will react and can only control what I can do. I didn’t know what I was going to get, but I got exactly what I wanted.”