By Bridget Fogarty, Milwaukee Neighborhood News Service - Mar 14th, 2019 11:11 am
Get a daily rundown of the top stories on Urban Milwaukee 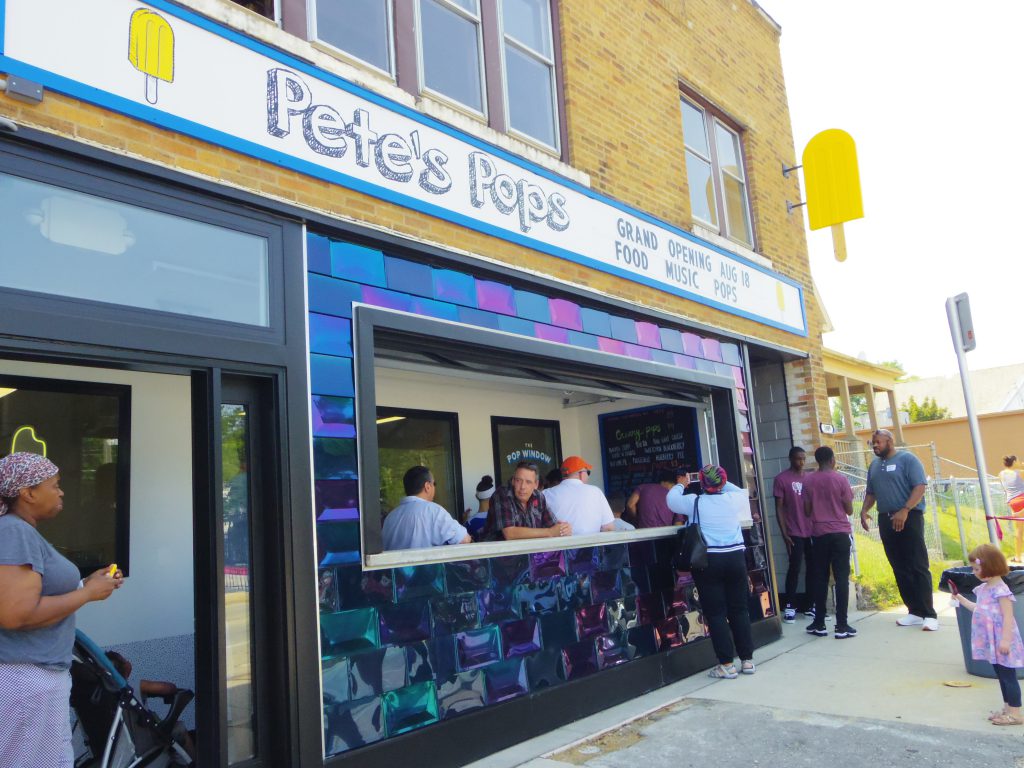 Community members gather for the grand opening of the new Pete’s Pops storefront on the Near West Side. Owner Pete Cooney had been selling his popsicles for three summers when he heard about the inaugural Rev-Up Milwaukee small business competition. Photo by Robyn Di Giacinto/NNS.

Once a year, the Eagles Ballroom at 2401 W. Wisconsin Ave. converts from a music venue for famous acts to a breeding ground for community innovation and entrepreneurship.

Rev-Up Milwaukee is the “Shark Tank”-style live pitch event that invites entrepreneurs to develop and share the business concepts they want to bring to the city’s Near West Side. More than 300 community members and judges gather annually at the event hosted by the Near West Side Partners. Finalists compete for the grand prize of $10,000 in start-up business funding, $25,000 in in-kind services and the establishment of a storefront in the area.

“You have to be there to feel the excitement,” said Kelsey Otero, the associate director of social innovation at Marquette’s 707 Hub and lead coordinator of the event.

Susie Roberts won the competition in 2018 for KalyANa Organics, her organic, gluten-free bakery that prepares packaged mixes and ready-made baked goods. Though she prepared with the Rev-Up team and practiced for weeks, Roberts said she still felt nervous on the pitch day.

“Everything was such a blur to me,” said the Sherman Park native, laughing. “The only thing I remember is them saying ‘And the winner is…. KalyANa Organics!’”

Roberts bought the Dousman-based baking company two years ago and had been selling her baked goods in select locations. She had been looking for a storefront in the Near West Side neighborhood for about two months before she heard about the competition.

“I wanted to somehow bring the business closer to home, and Rev-Up Milwaukee helped me do that,” Roberts said. 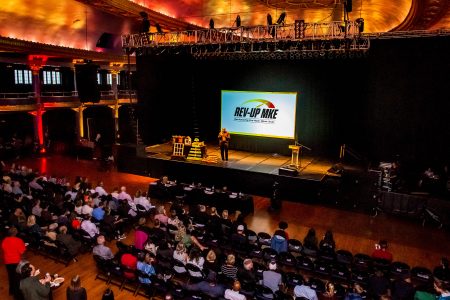 About 60 entrepreneurs from and outside of Milwaukee applied for the 2018 competition, and seven finalists were selected to participate in the live pitch event, Otero said. Finalists received one-on-one mentorship from business professionals at Marquette University’s 707 Hub, a center of innovation for entrepreneurs and professionals to collaborate, in preparation for the live pitch day.

“We are creating that next generation of entrepreneurs to return to the neighborhood’s roots,” Otero said. “People from outside the Near West Side look here and see a place of promise.”

Those roots run back to what the Near West Side Partners call the “anchor institutions,” or the neighborhood’s first startups that became big–name companies, such as Harley-Davidson and MillerCoors.

Since the competition’s start three years ago, two businesses opened and two more are in their final preparations to open. According to Rev-Up Milwaukee, these businesses have created 27 jobs and employed more than a dozen Near West Side residents. Otero said business owners embrace the “underlying narrative of hiring through the neighborhood,” with the hopes to expand the role of entrepreneurship in Milwaukee.

Roberts said she shares the Rev-Up vision to grow the neighborhood and make it a better place to work. “I want to be in this area to pull in employees from the community, especially young people.”

Lisa McKay, of Lisa Kay’s Catering won the Rev-Up Milwaukee competition in 2017. While the competition initially gave her an enhancement in her business, she soon will have a permanent, home-based kitchen, Otero said.

Pete Cooney won in 2016 for his business “Pete’s Pops.” Cooney had been selling his popsicles for three summers when he heard about the inaugural Rev-Up Milwaukee small business competition.

His business, which had consisted of only a single pushcart of ice pops, is now a colorful storefront that sells more than 50 flavors of popsicles at 3809 W. Vliet St.

“I knew that my product was really good for what we’re trying to do on the Near West Side,” Cooney said. He said he was first drawn to the live pitch competition because it would give his business the chance to be a “positive anchor” in the community.

Cooney said his vibrant storefront, equipped with “The Pop Window” and an open-air garage door window, always attracts curious passersby and many regulars.

“Every day, the first thing we do is roll up that garage door,” Cooney said, describing the calm before the storm of clients on a summer day. “There’s music playing, people just hang out.”

Across the street from his business is the Hmong American Friendship Association. Cooney said that in his first few weeks of construction, a young member of the Hmong community walked over to his store to see what was going on. “We never get anything like this over here,” the boy told Cooney excitedly, “and it’s really cool that you did this.”

Cooney said he appreciates the live pitch event and its support even after the competition.

“Rev-Up Milwaukee has given my business a boost and a reason to keep going,” he said.