By Wisconsin Democracy Campaign - Mar 6th, 2019 01:13 pm
Get a daily rundown of the top stories on Urban Milwaukee

Spending by candidates and special interest smear groups in the 2018 fall legislative races hit a record $35.8 million, according to a Wisconsin Democracy Campaign analysis. 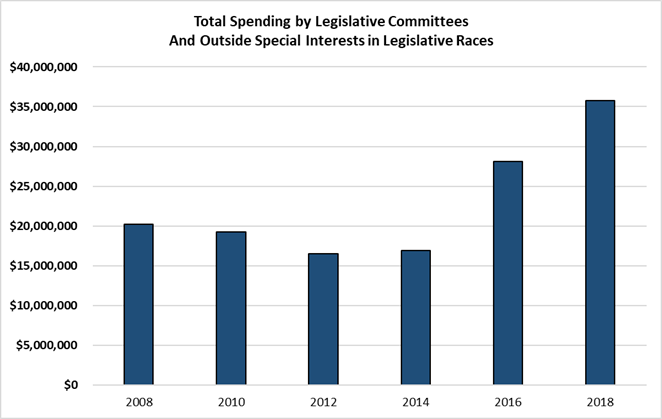 The successive record spending by candidates and outside electioneering groups in the 2016 and 2018 regular legislative races was triggered in 2015 by a conservative Wisconsin Supreme Court decision that decimated the state’s campaign finance laws and then by sweeping changes to the laws by the GOP-controlled Legislature and former Republican Gov. Scott Walker.

The Wisconsin Supreme Court decision in the John Doe II case said that candidates can coordinate with outside “issue advocacy” groups.

The changes by the Legislature and Walker doubled candidate contribution limits, allowed corporate contributions to parties and legislative fundraising committees for the first time in more than 100 years, loosened reporting requirements for independent expenditure committees, and also allowed undisclosed issue ad groups to coordinate with candidates.

The 1st Senate District, which cost nearly $4.2 million. The candidates spent about $832,340, led by incumbent Democratic Sen. Caleb Frostman, of Sturgeon Bay, who spent about $430,840. Outside groups spent more than $3.3 million. Topping the list were WMC and GWC, which spent more than $1 million each. The WMC backed GOP Rep. Andre Jacque, of De Pere, who won, and the GWC supported Frostman.

The 19th Senate District, which cost more than $2.3 million. The candidates spent about $945,350, led by incumbent Republican Senate President Roger Roth, of Appleton, who spent about $499,000 and won. Outside groups spent nearly $1.4 million. The leading spenders were the GWC, which spent an estimated $800,000 to support Democrat Lee Snodgrass, and the Wisconsin Realtors Association, which spent $208,850 to support Roth.

The 5th Senate District, which cost more than $2.2 million. The candidates spent $920,430, led by incumbent GOP Sen. Dale Kooyenga, of Brookfield, who spent about $622,440 and won. Outside groups spent more than $1.3 million. The leading spenders were GWC, which doled out an estimated $750,000, and High Ground Political Fund, which spent about $166,550. Both groups backed Democrat Julie Henszey.

The 23rd Senate District, which cost nearly $1.1 million. The candidates spent about $610,120 on this open seat, led by Republican Rep. Kathy Bernier, of Chippewa Falls, who spent more than $435,000 and won. Outside groups spent about $455,800. Topping the list was WMC, which spent nearly $246,000, and the Republican State Leadership Committee, which spent an estimated $70,000. Both groups supported Bernier.

The 25th Senate District, which cost more than $1 million. The candidates doled out about $642,700, led by Republican James Bolen, of Cable, who spent about $336,575. Outside groups spent $391,500, led by the Republican State Leadership Committee at an estimated $350,000 to support Bolen, and GWC, which spent $41,500 to oppose Bolen. Incumbent Democratic Sen. Janet Bewley, of Mason, won the race.

The Democracy Campaign calculated the cost of the legislative races using state campaign finance reports filed by the candidates and some electioneering groups; fundraising and spending reports filed with the U.S. Internal Revenue Service; and television ad buys made by outside groups that did not have to disclose their spending.

For more details about the spending and electioneering activities of all the electioneering groups, go to the Democracy Campaign’s “Hijacking Campaign 2018” feature.

Spending by Electioneering Groups in the Fall 2018 Legislative Elections