Inside the Bobblehead Museum 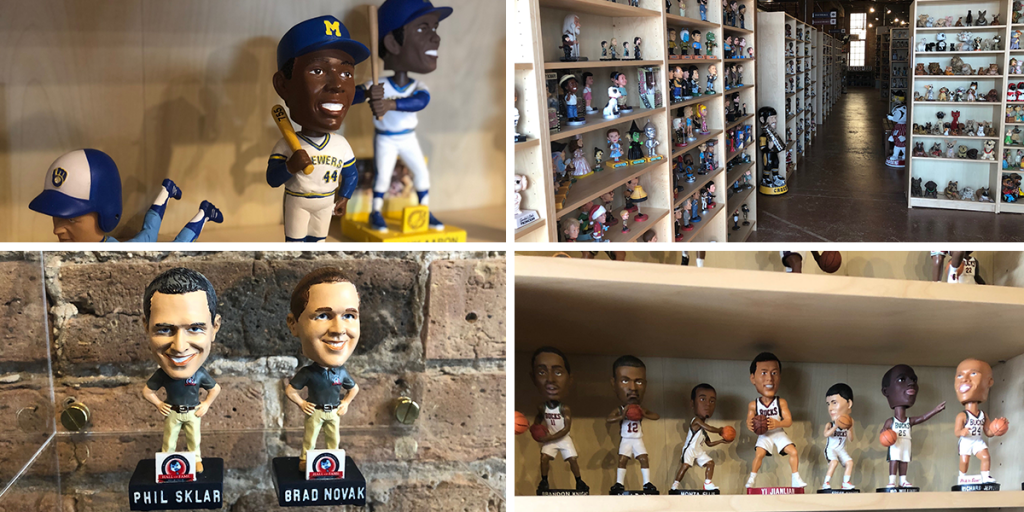 The National Bobblehead Hall of Fame and Museum, located above the Colectivo Coffee cafe at 170 S. 1st St., has a dizzying array of over 6,500 bobbleheads on display. They range from Giannis Antetokounmpo and Derek Jeter to the cast of the Big Bang Theory and Darth Vader. It’s the largest collection in the world. Seriously.

The collection is organized by subject: basketball, football, hockey, baseball, pop culture or even Supreme Court Justices. Looking for vintage 1960s NFL and MLB bobbleheads? They have them. Want to see if you have all of the Milwaukee Brewers bobbleheads from last year? They have them. A Rasheed Wallace Detroit Pistons bobblehead? It’s on display. And while 6,500 sounds like a staggering sum, at least 4,000 more unique bobbleheads are in storage, ready to be taken out for special exhibits.

Museum founders Phil Sklar and Brad Novak have a bold goal. “When people think of bobbleheads, we want them to think of us,” says Sklar. The museum is just the tip of the iceberg for their business. The partners, who have been pursuing their dream full-time since 2014, also create and sell bobbleheads. Remember 98-year-old Sister Jean from Loyola University’s deep run in the NCCA men’s basketball tournament last year? The partners have sold almost 19,000 bobbleheads of the famous nun in partnership with the university.

They’ve also created bobbleheads for a wide variety of events and personalities. “Fun is key,” says Sklar. They started with UW-Milwaukee super fan Michael Poll. Other productions have included a Major League Baseball rivalry series (think Brewers vs Cubs), signature moments in team histories (the miracle catch for the Minnesota Vikings in the 2018 playoffs) and Donald Trump and Hillary Clinton. They have license agreements with the NCAA and the All-American Girls Professional Baseball League (featured in the 1992 film A League of Their Own), and reach out to other leagues when a creative idea strikes them. A 32-player Negro League series is coming later this year.

The operation, which runs out of office space in the rear of the 4,000-square-foot museum, relies on a global supply chain and just-in-time production. Sklar and Novak dream up the idea, contact a manufacturer, secure a design and any licensing and then begin preselling the bobbleheads online. Once they arrive a few weeks later, a third-party firm with a Milwaukee-area warehouse coordinates their receipt and handles shipping. It’s as much a tech startup as it is a museum.

The partners are childhood friends from Rockford, Illinois who came to UW-Milwaukee for college. They quit their day jobs in 2014 to pursue the business full time. At the time that included a $250,000 crowdfunding campaign to construct a new building. That didn’t go as planned; they only got to $50,000 and Kickstarter returned all of the money, but the idea didn’t die. Sklar says many of the promised funders became inaugural members of the then-virtual museum, getting early access and discounts. The partners started to scale the process, while learning what works and what doesn’t. When asked for an exact count of how many unique bobbleheads they’ve produced, Sklar admits they’ve lost count, but it’s more than 500.

Will they ever have one of everything? “I don’t think that’s a reasonable goal because there are so many one-of-a-kind bobbleheads,” says Sklar. And they’re part of that expanding problem, offering to produce custom bobbleheads on their website for $119.

The two got into bobblehead collecting after Novak, when he worked for the Rockford Riverhawks minor league baseball team, was given the team’s first-ever bobblehead giveaway. They started small, circling the dates for bobblehead giveaways at Milwaukee Brewers and Milwaukee Bucks games. “We didn’t have a specific plan in mind. We were just getting them and putting them on display.”  They ended up visiting almost all of the MLB ballparks, picking up a number of bobbleheads along the way.

It’s fan giveaways like this that created the modern bobblehead market. In 1999 the San Francisco Giants gave away a bobblehead of hall-of-famer Willie Mays to all fans attending a game. The Brewers have taken the idea to the extreme, giving out a number of bobbleheads every year to draw fans to Miller Park. Sklar and Novak have jumped on the trend with a vengeance.

The museum’s collection doesn’t rely on the partners traveling to games and scouring eBay; teams and universities have been sending them sets. Sklar showed me recent arrivals from Purdue and the Wisconsin Timberrattlers. Fans also donate them, including Bobblehead Bob, a super collector who had amassed over 1,500 before being stricken with terminal cancer.

As for the “Hall of Fame” portion of the museum’s name, that has a long ways to go. A corner of the museum honors the sole inductee to date, baseball (and gambling) legend Pete Rose — who isn’t eligible for the Baseball Hall of Fame — but whose bobblehead stands as the first inductee to the Bobblehead Hall of Fame. And he won’t have to stand alone much longer; Sklar notes that more inductees are on the way,

The museum is open to the public on weekdays from 10 a.m. until 6 p.m., $5 gets you an all-access pass to the collection. Sklar envisions weekend hours coming in the next few weeks. And yes, there is a store so you can buy and take home your own bobblehead. 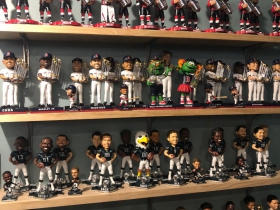 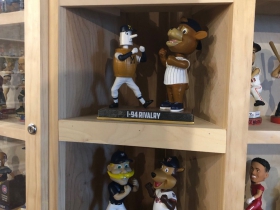 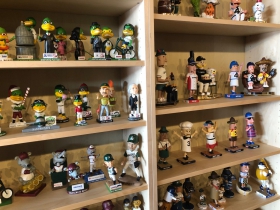 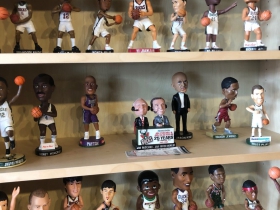 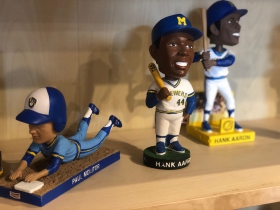 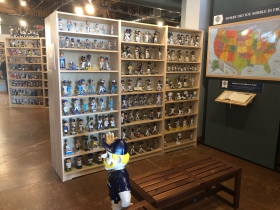 One thought on “Eyes on Milwaukee: Inside the Bobblehead Museum”