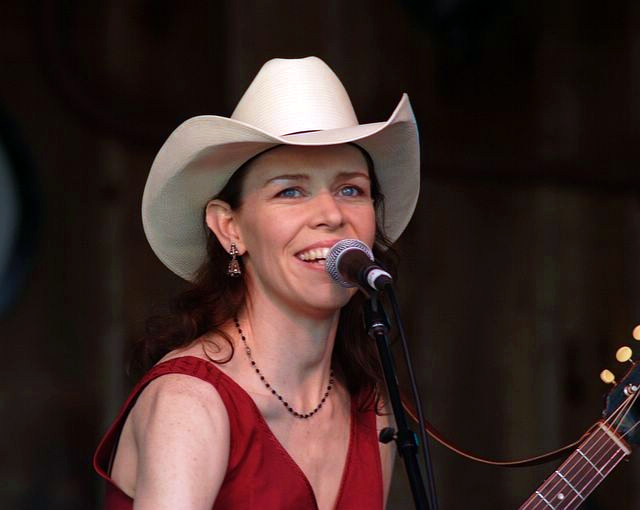 Pet peeve: Artists who interpret songs by slowing the tempo in an effort to bring the lyrics to life. It’s vampiric, draining the life from a song you love. This microscopic technique assumes all songs won’t be understood until they are converted into dirges and all the details are overdone. Could it be a blatant cry for recognition and validation of interpretive skills? Artistic ego at work? Usually. But the exception that proves the rule is Gillian Welch singing Gram Parsons’ “Hickory Wind.”

It’s a marriage made in Americana Heaven. A song by its patron saint sung by its guiding light. Washboard scrubbers and fiddle scrapers everywhere are in ecstasy. Yet you won’t hear genre when you listen to it, you’ll wonder instead how someone can pack that much emotion into one song. I came upon on it last week about forty feet into a Byrds tunnel as I was researching Gene Clark. Parsons had been a key member of Clark’s former band when they made their stellar Sweetheart Of The Rodeo album. He brought an authentic Southern voice to the proceedings and the resulting classic made it okay to like country for hippies and hipsters everywhere. The album was filled with their usual dazzling harmonies and in Parsons version of “Hickory Wind” you also see a country singer who could pull all the right strings in the right ways. Alas, his time was short and that’s how legends are made. (Suggested reading: Road Mangler Deluxe by Phil Kaufman)

During my due diligence on Clark I came across Gillian Welch singing this homesick nugget. Welch goes nowhere and does nothing without her partner David Rawlings. When they harmonize, he ducks under the melody allowing it to glide with nothing above it. They are so close and perfect in their duet singing (and playing) I’ve come to think of them as a kind of super-organism. If you’re not familiar with or not sure you like country, you should let them be your introduction. While they clearly love the sound and stick to the template, their lyrics are not typical Music Row schlock. Welch and Rawlings wouldn’t be caught dead pandering, a posture that keeps the 180º from the current country crowd.

The song “Hickory Wind,” a wistful tale of longing for a time and place long ago, sounds like it was created for Gillian — at least when she sings these concise lyrics:

In South Carolina there are many tall pines
I remember the oak tree that we used to climb
But now when I’m lonesome, I always pretend
That I’m getting the feel of hickory wind

I started out younger at most everything
All the riches and pleasures, what else could life bring?
But it makes me feel better each time it begins
Calling me home, hickory wind

It’s hard to find out that trouble is real
In a far away city, with a far away feel
But it makes me feel better each time it begins
Calling me home, hickory wind

Lesser singers try to make it about themselves. Some overthink it and emphasize in the wrong places. Other are less present, sounding like they have been pulled away from something they’d rather be doing. You can almost picture them reading the words as they sing. Then there’s Gillian.

Listen to what she does at the end of words and phrases, how she lets go in such a tender manner. The quaver in her voice, the reediness, these can be seen as flaws in a world that treats singing as a competitive sport. But she embraces the vulnerable and certainly isn’t trying to impress a judge. Every step of the way her shadow, David, is right there with her, both of them releasing those words like you would a captive bird. It’s a thing of beauty — a perfect pairing of song and artist.

Granted, it’s a dirge. But it’s also a waltz and that sprung rhythm holds up well at slow tempos. The atmospheric production verges on experimental and I have to subtract half a point for trying just a little to hard. Then again, the Hammond organ in the background stumbles here and there, so it’s not overly slick or polished. Then there’s the sound of the track.

Gillian and David bought the legendary Woodland Studio in East Nashville. It was where Bob Dylan recorded “Blonde On Blonde.” Since their first record, produced by audiophile T Bone Burnett, they have made records that are sonic masterpieces, the kind you use to test high end gear. Why don’t more records sound like this?

In the Year Of The Woman I nominate Gillian Welch for Best Artist in Nashville. She’s in good company with Kacey Musgraves and Margo Price, who she may have inspired. She has definitely inspired me and I have a feeling Gram Parsons, who was trying to create his own genre, something he called Cosmic American Music, would approve.