The Mystique of Urban Farms

Grohmann Museum’s photographic exhibit captures city’s urban farms of the past — and present. 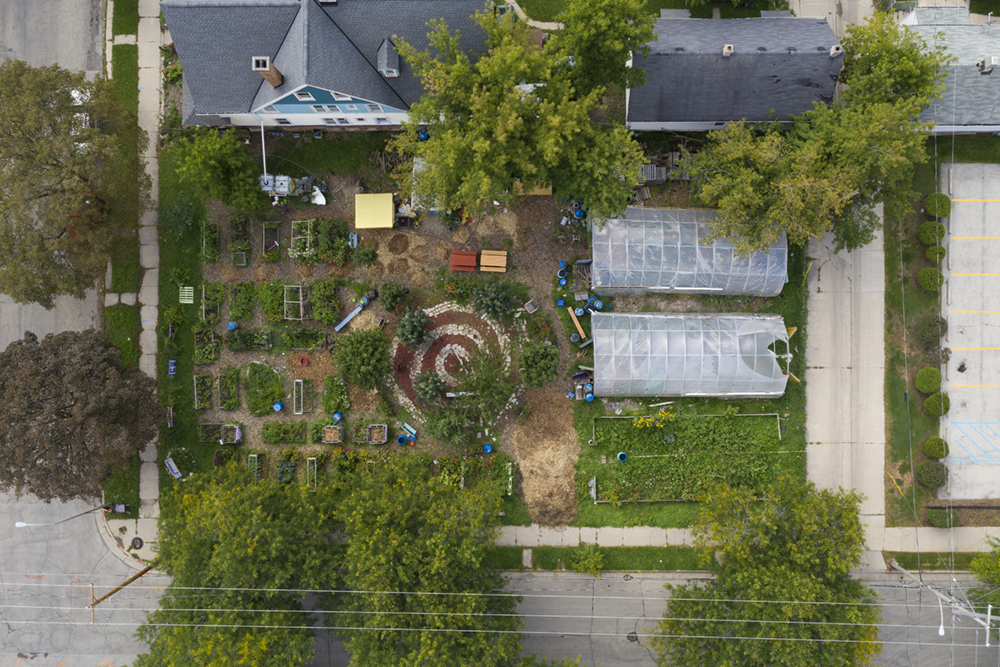 It’s hard to imagine downtown Milwaukee without the courthouse, library, museums, and many restaurants. But Wisconsin’s biggest city was once the site of a number of small farms. And despite new housing and business developments, a number of urban gardens continue to flourish, some in Milwaukee’s most impoverished neighborhoods.

The Grohmann Museum’s latest exhibit, Growing Place: A Visual Study of Urban Farming, on display through April 28, documents the history of farming in Milwaukee from the mid-19th century to present day, from fruit stands on Commission Row (now the Third Ward neighborhood) to Victory Gardens planted during World War II, to modern-day empty lots transformed into vibrant community gardens.

“We wanted to make sure this history was noted,” he adds.

Growing Place showcases a collection of more than 30 photographs and archival materials, including cookbooks and newspaper articles, courtesy of the Milwaukee Public Library, the Milwaukee County Historical Society, and longtime urban farmer Dennis Lukaszewski, who worked with the UW Extension. Several 19th-century farming tools, including a suitably rusty plow and crank seeder and a rake, are also displayed.

Lukaszewski “become kind of a repository for the UW Extension,” noted Carriere.

The exhibit highlights the contributions of numerous politicians and nonprofit groups to the urban farming movement. In the early part of the 20th century, Milwaukee socialist mayor Daniel Hoan’s progressive reforms included city beautification, while county supervisor Rudolph Pohl was instrumental in implementing community gardens in Milwaukee in the 1970s.

In the 1980s, nonprofit group Shoots ‘n’ Roots aimed to raise environmental awareness among youth while bridging communities, particularly in low-income African-American and Asian-American neighborhoods. From 1980 to 1990, Milwaukee’s Hmong population tripled, and by 1988, 43 percent of the city’s community garden plots were tended by Hmong residents.

One of the most influential figures in Milwaukee urban agriculture, former professional basketball player Will Allen, formed Growing Power in 1993, an organization which taught thousands of people gardening skills, locally and across the globe.

“We tried to pick folks who were illustrative of this broader narrative,” Carriere said, of the exhibit’s focus on urban farming.

Sadly, both Shoots ‘n’ Roots and Growing Power are now defunct due to financial problems. But thanks to socially and environmentally conscious entrepreneurs and activists, vegetable and herb gardens, fruit orchards, and even peach trees, thrive in some of Milwaukee’s poorest zip codes, many of which are considered “food deserts,” or neighborhoods with limited access to fresh, healthy foods. Taught by Allen, Sharon and Larry Adams founded Walnut Way Conservation Corporation in the Lindsay Heights neighborhood in 2000.

Organizations including Walnut Way, and Andre Lee Ellis’s We Got This, teach young people sustainable farming practices, help foster a sense of community, and allow them an opportunity to develop an appreciation of nature and the environment. Schalliol’s color photographs of people working on urban gardens in the last decade–Ellis, Allen, and a vendor at the Fondy Farmers Market at 2200 W. Fond du Lac Ave., for example—illustrate citizens’ pride in creating a healthier and more beautiful community.

Eleven aerial photographs that Schalliol took by drone draw attention to the scope and size of Milwaukee’s urban gardens. From the street level, many, including the garden at the All Peoples Church site, 2600 N. 2nd St., and Hide House Lofts, 2615 S. Greeley St. might appear hidden. The photographs prove to viewers that there’s more than meets the eye in many institutions and residential areas. 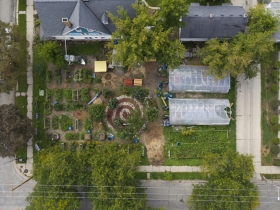 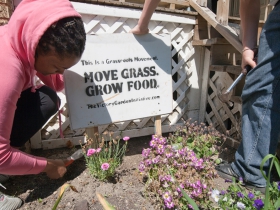 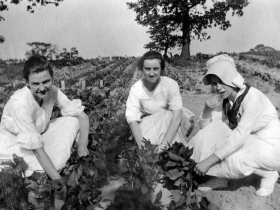 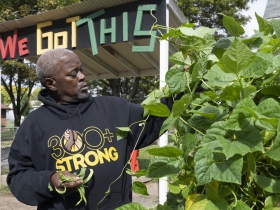 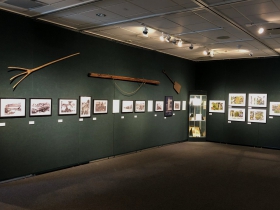 2 thoughts on “The Mystique of Urban Farms”