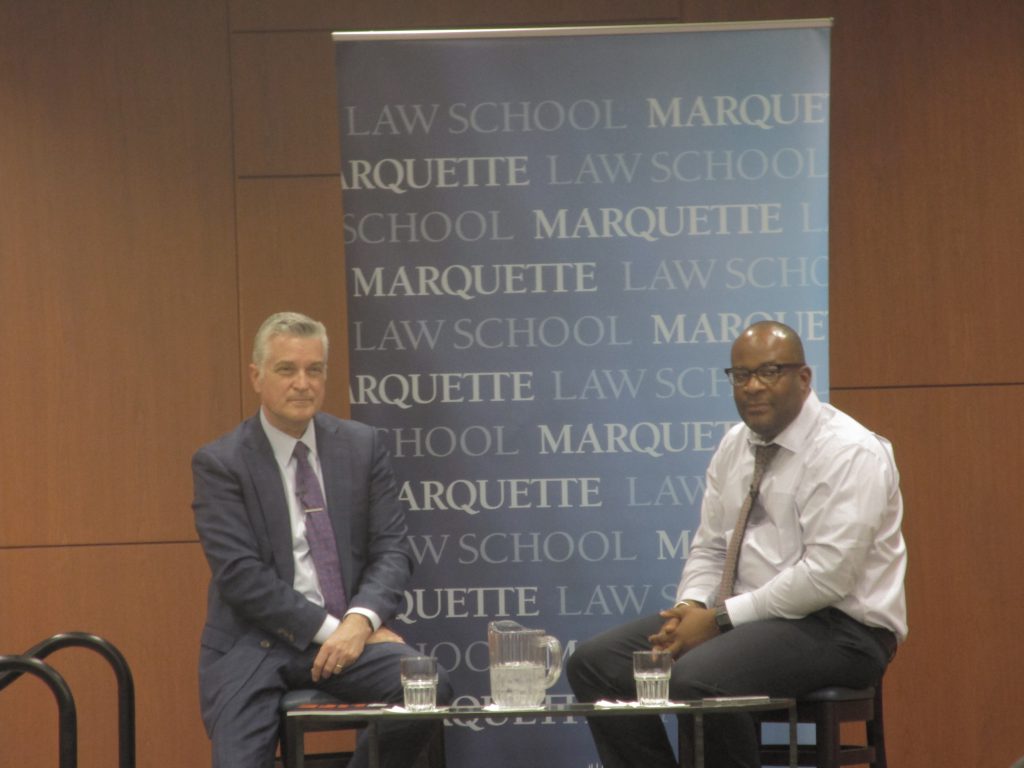 When it comes to eradicating violence in Milwaukee, Reggie Moore, a local leader well versed on its detrimental impacts, has this to say: “I think there’s been progress, but we have a long way to go.”

The statement came seven hours after the Milwaukee Police Department Matthew Rittner became the third officer slain in the line of duty over the last eight months.

Moore, director of the Milwaukee Health Department’s Office of Violence Prevention, sat down with veteran journalist Mike Gousha Wednesday for the latter’s ongoing On the Issues series at Marquette Law School to discuss some of his efforts, including the multi-faceted Blueprint for Peace.

The conversation had been scheduled for weeks, but turned out to be timely as news began pouring out about what transpired on the city’s south side Wednesday.

Mayor Tom Barrett appointed Moore to head up the Office of Violence Prevention in 2016. His prior resume included founding the nonprofit group, Urban Underground.

Moore also settled into the role with first-hand experience, which he spoke of candidly Wednesday. One of his first brushes with violent behavior was at age 12, when he was held up at gunpoint.

“A child having a gun pointed in their face — it’s something you don’t forget,” Moore said.

In the years since, Moore began shepherding the Blueprint plan. It zeroes in on 10 neighborhoods and is wrapped around six goals.

But the overarching principle around Blueprint, Moore said, is remarkably simple: Violence is preventable.

Moore and other city officials have described Blueprint as Milwaukee’s first comprehensive violence prevention plan. Through partnerships and programs, the effort aims to reduce the number of shootings by first working to build a stronger, more resilient community.

“The pain that we hold inside — if it’s not transformed, it’s transferred,” Moore said. “We have to have places to heal.”

In addition to his leadership role in the Office of Violence Prevention, Moore more recently has been involved in a steering committee known as SWIM, which stands for Scaling Wellness in Milwaukee. Members in the collaborative have been working to address the impact of trauma in the city.

Moore said he is encouraged by SWIM, but prefaced the statement with this sentiment: “I think any initiative is as good as the momentum that is behind it.”

The concept of trauma was a recurring theme throughout the hour-long discussion. A trauma response initiative, for example, brings together the expertise of a cross-section of professionals in the community to work with families and children who have faced a traumatic event.

“It isn’t investigatory at all,” Moore said. “It is trying to address the impact.”

Comprehensive planning to deal with trauma, by Moore’s estimation, has been a long time in the making.

“Trauma is not new to our community,” he said.

Gousha asked Moore to weigh in on the state of Sherman Park, which continues to heal two-and-a-half years after violence, unrest and arsons left visible scars within the neighborhood, shining a spotlight on some of the deeply rooted troubles blanketing Milwaukee.

Moore said he responded to Sherman Park the evening the unrest boiled over into the streets and witnessed, first-hand, the growing furor as afternoon gave way to evening on that historic day.

“Everything pretty much escalated from that point,” Moore said. “It was a cumulative response, I think, to police accountability.”

The groundswell of support in the years since, including the unveiling of the Sherman Phoenix development, is a sign of the renewed optimism within that segment of the city.

“I think people are paying attention,” Moore said. “I think there’s been a level of momentum where folks are starting to stand up.”

One thought on “Reggie Moore’s ‘Blueprint for Peace’”