New Leader for Zoning Appeals Board 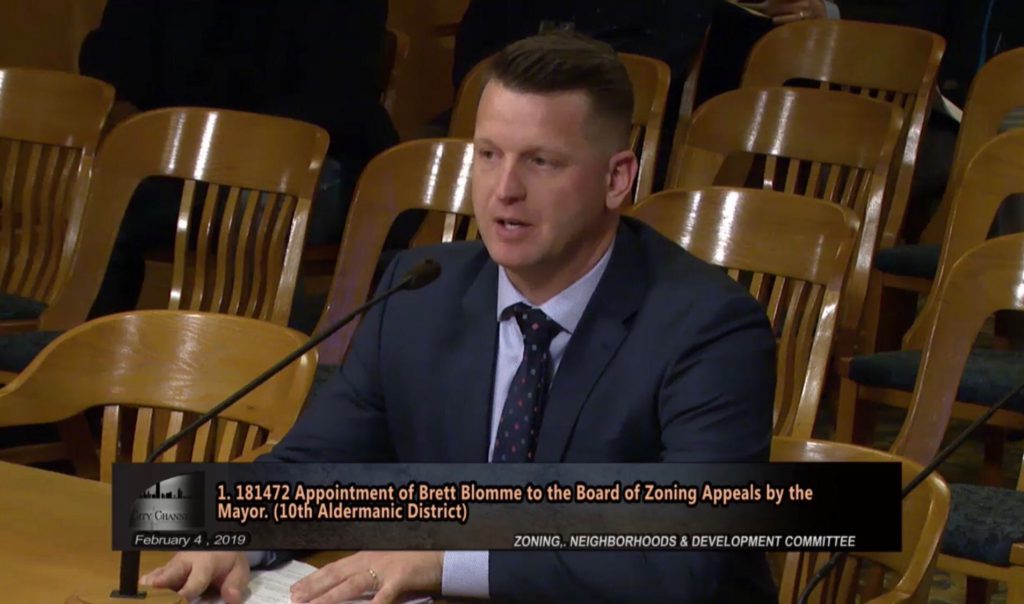 The city’s quasi-judicial Board of Zoning Appeals will soon have a new leader. Mayor Tom Barrett has appointed attorney Brett Blomme to succeed board chair Catherine Doyle, whose term had expired some time ago.

The board meets monthly to hear appeals in matters related to the city’s zoning code, often for special uses for individual properties including group homes and parking lots.

Blomme serves as president and CEO of the Cream City Foundation. The foundation, which Blomme has led since June 2017, works to address the economic, health, safety and equity needs that prevent the LBGTQ+ community from achieving full inclusion and acceptance.

The part-time position as BOZA chair pays $39,865 annually, an approximately 30 percent reduction in its pre-2018 salary following a veto override by the Common Council. Led by Alderman Robert Bauman, the council moved to cut the pay to express frustration with the board’s perceived failure to follow city ordinances on zoning decisions.

Characterizing the board as “run amok,” in late 2017 Bauman said: “the chair maybe puts in 10 to 15 hours a month… On an hourly basis, this is the highest paid position in city government.” The five-member board is appointed by the mayor and confirmed by the council. The remaining members make $4,200 annually.

The board is tasked with deciding cases on four factors, one of which is adherence to the city’s comprehensive land use plan. Doyle, following an opinion from the independent City Attorney’s office, said the board would not reject cases for only failing to comply with the land use plan.

Blomme, in response to a question from Bauman at his confirmation hearing, sees things differently. He told the Zoning, Neighborhoods & Development Committee: “Until the council changes the ordinance or we have a court ruling, we look at the ordinance as it is.” The implication is that he would favor rejecting cases only for non-compliance with the city’s land use plan.

Bauman, who represents much of Downtown and the city’s near west side, has fought a number of group homes that have attempted to open in his district. He referred to their proliferation as a move to “cash out” by landlords.

Blomme, a graduate of Marquette University and the University of Missouri School of Law, previously served as an assistant city attorney in Madison and as an assistant state public defender. During his time in Madison Blomme served on the Zoning Board of Appeals in Monona. “I’m very impressed with his credentials,” said Bauman.

Ald. Jose G. Perez, who characterized the city as “too reactionary,” pushed Blomme to be proactive in ensuring the board is accessible to all Milwaukeeans. “In terms of accessibility, I think that’s key to this role,” responded Blomme.

Alderwoman Milele A. Coggs offered a more cautionary note. “There are often times residents think that there is some type of political pressure that influences decisions by the board,” she said, stressing that the board needs to be fair and transparent. Blomme, a resident of the city’s far west side, said he will strive for fairness.

The full Common Council will take up Blomme’s confirmation on Tuesday, February 5th.

Blomme would join members Henry Szymanski, Jewel Currie, Jennifer Current and Eric Lowenberg on the board. Karen D. Dardy and Erik Richardson serve as alternates. Doyle, the sister of former Governor Jim Doyle, has served on the board since 1997.