Criminalized first offenses and fines that could devastate the poor, ACLU says.

By Gretchen Schuldt, Wisconsin Justice Initiative - Feb 1st, 2019 12:29 pm
Get a daily rundown of the top stories on Urban Milwaukee

State legislators have introduced a package of drunk-driving proposals that would increase minimum prison terms for people with five or six drunk driving convictions and criminalize first-offence drunk driving, which now is considered a civil ordinance violation.

Another bill would impose financial penalties on some alleged first-time offenders that are not levied on those charged criminally with operating while intoxicated as a repeat offender (second offense or greater).

Currently, those convicted of their fifth or sixth drunk driving offense face a minimum of six months’ incarceration and a $600 fine. The proposed  bill would  require a prison term of at least 18 months. 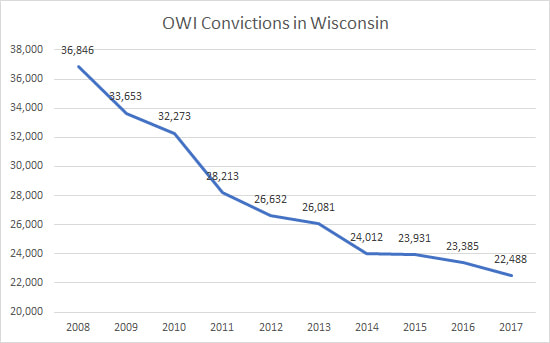 The bill criminalizing first-offense drunk driving would make it a misdemeanor, punishable by up to 30 days incarceration and a $500 fine.

Offenders could petition to have the criminal charge converted to an ordinance violation if, after five years, he or she has not committed any new drunk-driving violations.

Another bill in the package would impose a minimum mandatory term of five years in prison for homicide by intoxicated use of a vehicle. A judge could waive the minimum sentence if the person killed was a passenger in the drunk driver’s car and the judge found that a lesser sentence was in the best interests of the community and the public would not be harmed.

And yet another bill establishes an absolute sobriety requirement for snowmobile drivers under the age of 21.

Defendants in criminal drunk driving cases do not face surcharges if they miss a court appearance.

For ordinance violations, including first-offense drunk driving, offenders do not have to appear in court unless they want to plead not guilty, negotiate a plea agreement, or set up a payment plan. Offenders who simply want to pay their forfeitures may do so by mail or, often, online.

The in-person requirement and the punitive surcharge would have “devastating consequences for those who live below the poverty line,” said Emma Shakeshaft,” an Equal Justice Works Fellow with the ACLU of Wisconsin.

“These punitive practices…really create a two-tiered system of justice,” she said. Those with higher incomes won’t feel the pain of a $300 surcharge as much as will poorer people, who also may have transportation or childcare issues, unstable jobs and less flexible work schedules, she said.

There are about 430 municipal courts around the state; many operate only a few hours a week or month, and some have schedules that vary. Municipal court judges do not have to be lawyers.