Up a Lazy River 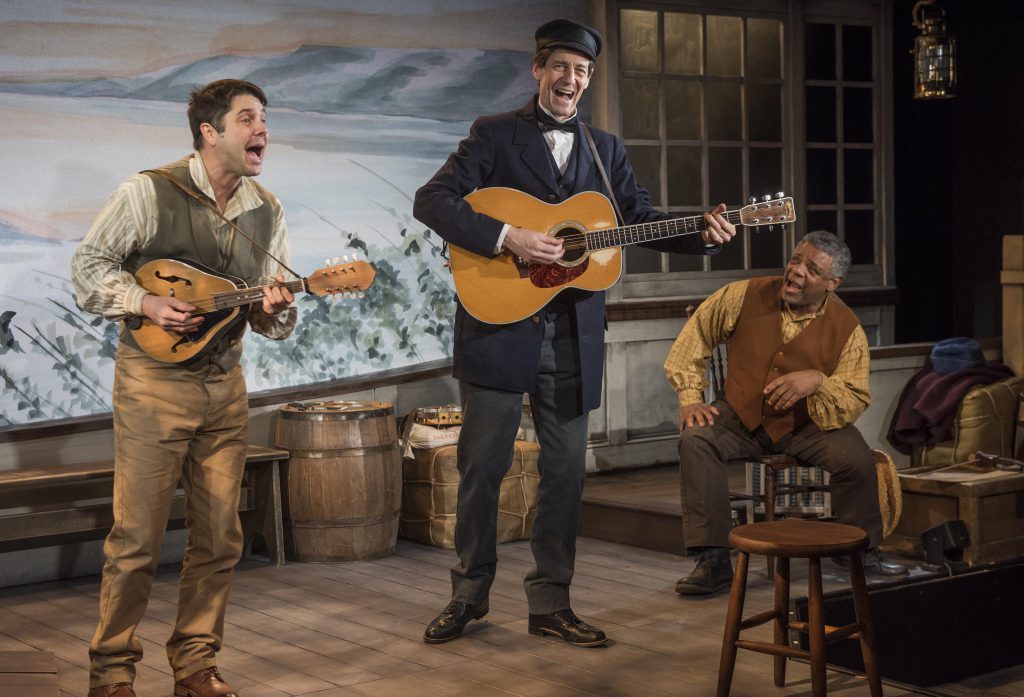 The Milwaukee Rep has used the Stackner Cabaret with much attention to theatrical detail. It is not quite a dinner theater reviving old musicals (though you can eat and drink there off a menu). It fashions its own lightly documentary structures around talented musicians and familiar or themed music, giving the ambience of a dramatic or comic event with easily absorbed and even singalong tunes.

This season Songs for Nobodies boasted not just a great chanteuse voice in Bethany Thomas but a performer who caught just enough of the style and pathos of the various famous singers under her care to keep us engaged. The All-Night Strut had vaudevillian turns as well as musical razzle-dazzle.

Now Mark Twain’s River of Song, through March 17, fetches some riverscapes in poetry and biographical notes about Twain to take us down the Mississippi River in a songbook of familiar or pertinent folkish tunes. Lazily, lively and impishly we wend through the 19th century life of farmers, gamblers, shanty dwellers, riverboat captains and even lumberjacks in a woodsy lament that echoes “Streets of Laredo.”

The journey requires two musicians skilled on many instruments. One is a veteran favorite, lanky David M. Lutken who brings a lyrical twang and fancy guitar and banjo work to every outing (he has been at the Stackner twice before). He has a talent for gently getting inside the words even as his fingers fly and his feet tap. He is joined by a virtual one-man band (accordion, mandolin, harmonica you name it) and harmonist, the still boyish Spiff Wiegand. There’s also a smiling washboard percussion partner for interludes and sidekick comedy, Harvy Blanks.

A 10 minute equipment glitch opening night forced Lutken and Wiegand into an impromptu hootenanny (regular hootenannies are planned after several Thursday shows at the cabaret), demonstrating not only their nimbleness but the basic pleasure of this show – performers who like their own stuff, know every folk song ever taken down and only occasionally put their playing on auto-pilot. (They are generally so good that the auto-pilot moments are noticed.)

The meandering journey down the Mississippi River, with Lutken  sometimes personifyingTwain, grows into an annoying gimmick in the second act. The writing creators – director Randal Myler and musical director Dan Wheetman – seem to have lost their inventiveness. They pad the trip by lifting wholesale from The Adventures of Huckleberry Finn. That gets to punch in a few of Twain’s best jokes, but it wipes away any feeling of originality – and it disregards the sense of history the music has carried with it. A song about the underground railroad, “Follow the Drinking Gourd,” is used as background mood and Blank works in a historic tear by voicing “Motherless Child” as he imitates Jim on the novel’s raft.

The quality of the musicians and Blanks’ earlier input led us to overlook some artificial enthusiasm in the early going, but so much deliberate pumping up of Twain toward the end is just too much. 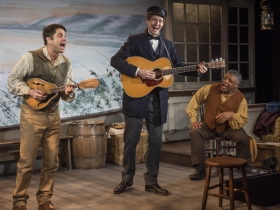 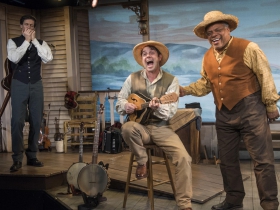 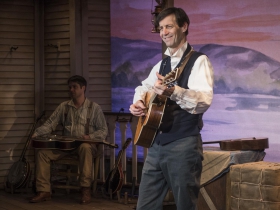 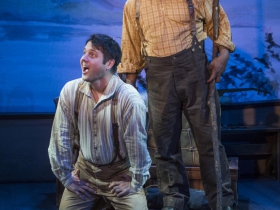 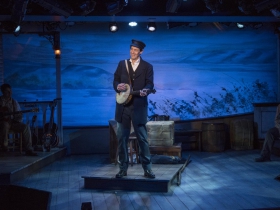 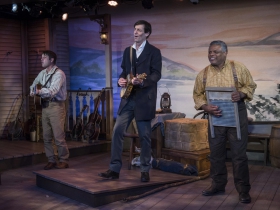