Bobby Osborne's singing on this Bluegrass song looks and sounds like magic. 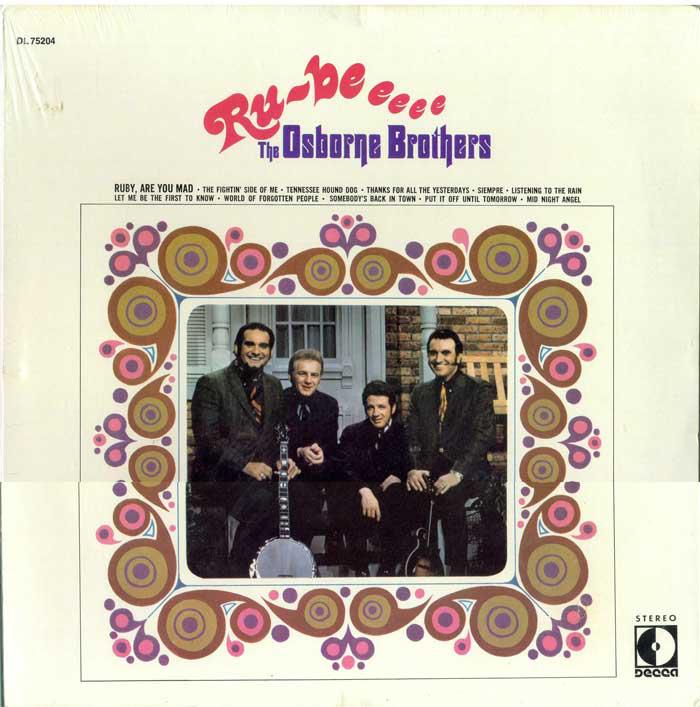 Ruby, Are You Mad?

What have I been missing? I’m not proud to say this is the first time I heard this, but I’ve been busy doing other things. All of them wrong, apparently. I should have been watching this on an endless loop — it’s that good and that insane. The Osborne Brothers singing “Ruby, Are You Mad?” is well worth the pleasant mental breakdown it will cause you.

First, for those of you who don’t go near Bluegrass for whatever reason, I have news, every one of those reasons is wrong. I know it’s seems corny and all “Hee Haw!” to you, but when this music is good it’s so joyous it’s scary. I understand — who isn’t just a little afraid of southern white men? Neil Young has apologized for his way too sweeping critique of them, so maybe we can also resolve to pass judgement on an individual basis only. I don’t know The Osborne Brothers personally, so I’ll remain neutral on the topic of their character. I almost don’t want to read about them, what if these people making the hairs on the back of my neck stand up turn out to be not so nice? It wouldn’t be the first time I had to build a Trump-size wall between an artist and their work.

Update: Wiki, my all knowing friend, assures me there are no ugly controversies associated with the brothers, so sigh of relief. Bobby Osborne, the high singing mandolin player who dominates this video, provide two of the more thrilling moments ever captured on film. From 0:38 to 0:52 (that’s fourteen seconds folks) he holds the same full throated high note. From the effortless look on his face you suspect he could have held it till the festival crowd went home. It’s a trick, sure, but it looks and sounds exactly like magic. If that doesn’t get you, at 1:45 he holds an even higher note, I believe it’s a D, for about twelve seconds. It doesn’t sound like he’s faking with falsetto. Even if he is, it’s a mind blowing moment that goes right to my monkey brain and scrambles it.

In this case it’s the singer, mostly, not the song. But the song is not bad. Like many of my favorite tunes, it goes nowhere harmonically, staying on the same chord all the way. So it’s not the shifting colors of the chord progression that draw you in, it’s the musicianship, the flat out NASCAR speed they perform at, and brother Sonny Osborne’s almost psychedelic filigrees on banjo that carry it home. The song is worthy, if slightly inscrutable — is it a love song or a potential murder ballad?

I’ve done all I can do
Tryin’ to get along with you
Still you’re not satisfied
Oh Ruby, Ruby honey, are you mad at your man?

If you don’t believe I’m right
Just call on me tonight
I’ll take you to your shady so cold
Oh Ruby, Ruby honey, are you mad at your man?

I mean, that last verse, right? “I’ll take you to your shady so cold” is ambiguous, but it conjures up memories of “Shady Grove” the murderous mountain standard. Ruby was written by a woman, Mae Carver. Very little info on Mae, but I know she was one of the few women playing banjo in Bluegrass. Her song has been covered everywhere and by everyone, so I hope she kept publishing.

The way this band stands and delivers is a treat. Everyone looks casual as can be, like they’ve done this before. But there is also no small amount of glee in their eyes. I imagine they’re reconnecting with some kind of inner musical miracle, one that makes them so glad to be where they are doing what they’re doing. Apparently, Bobby, who as born in 1937, still enjoys it — he’s still out there with his sons playing and singing. This song alone puts Bobby in the pantheon of great Bluegrass singers, along with Ralph Stanley, the great shiver maker.

Make no mistake, bluegrass is technically demanding. You need talent and drive to play it well. But it isn’t shredding. The musical fireworks in this song never obscure the song. I like music that makes room for both virtuosity and great stories sung from the heart. Like Blues, it’s rural cousin, this music was created by poor people in response to harsh conditions. It never gets too far above the plowed earth, but occasionally, when a singer as good as Bobby Osborne is singing, it can soar up to a place only angels know.

P.S. Many thanks to John Ziegler, proprietor of “The Chicken Shack” on WMSE. This song was posted on his Facebook page. Listen to his show and soak up a lot of great country music of the non-“bro” type!