By Analise Pruni, Milwaukee Neighborhood News Service - Dec 7th, 2018 10:13 am
Get a daily rundown of the top stories on Urban Milwaukee 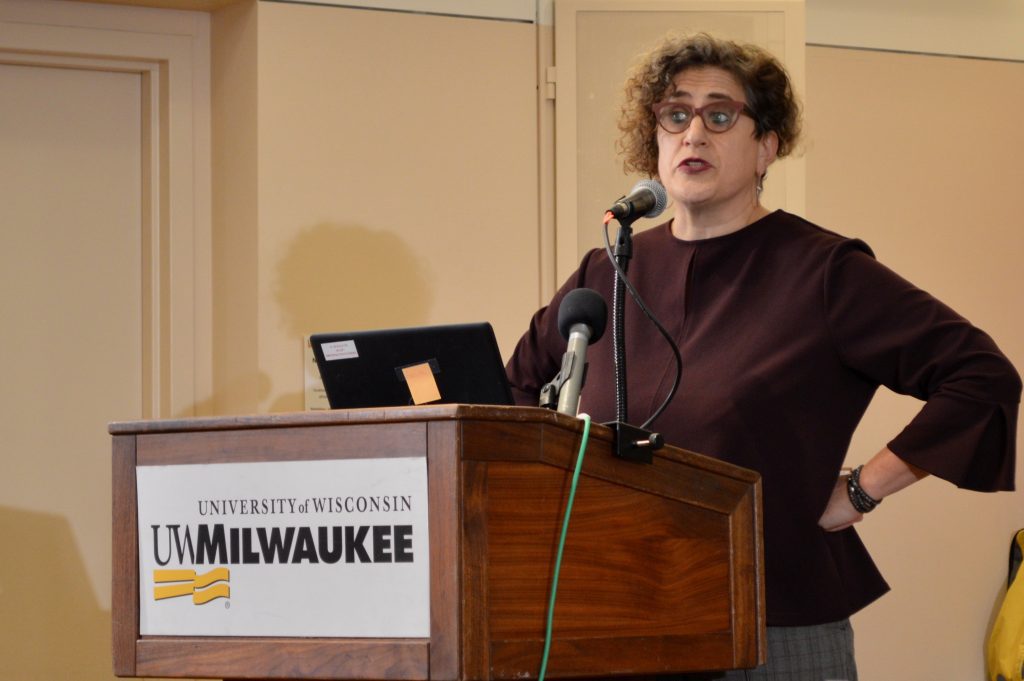 Immigration historian Rachel Ida Buff emphasizes the importance of knowing the history of immigration rights, to understand the present. Photo by Analise Pruni/NNS.

When Janan Atta-Najeeb speaks in rural areas about immigration, she is sometimes escorted by police because her hijab and her faith make her a “scary” person. As president of the Milwaukee Muslim Women’s Coalition, she said people need to “wage a war of information” when it comes to immigration.

At a recent panel at the University of Wisconsin Milwaukee, moderated by Urban Studies director Joel Rast, five panelists addressed “Immigration and the City in the Trump Era” and the implications of immigration policies.

“History is what hurts,” said panelist Rachel Ida Buff, immigration historian, and Community and Cultures director at UWM. “In times of crisis we look to the past to examine its lessons for how we might go forward.” 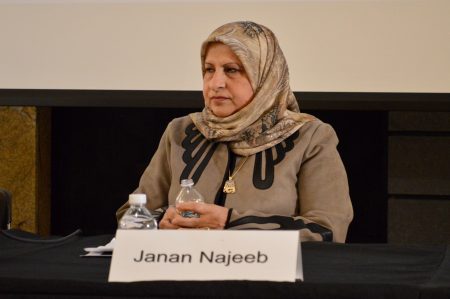 She said that the white land-owning men who wrote the Fourteenth Amendment to the U.S. Constitution, which grants citizenship to “all persons born or naturalized in the United States” and ensures “equal protection of the laws” was never meant to include races such as Asian-Americans.

Long after it became clear that these protections were only to be afforded to white citizens, Buff said the idea of a “sanctuary” or safe space for immigrants and refugees began to spread in churches in the 1980s. The notion of sanctuary spaces has now been extended to encompass some campuses and entire cities.

Some Milwaukee organizations and campuses offer immigration rights training to encourage resistance to illegal detention policies. In 2017, the Milwaukee School Board voted unanimously on a resolution declaring it a “safe haven” and strongly encouraged legal means to oppose U.S. Immigration and Customs Enforcement (ICE) and to protect students and families at risk of deportation.

Buff became a member of a UWM sanctuary campus task force that began in 2017, to help protect historic public sanctuary spaces such as churches and universities that may increasingly come under attack.

“It’s very clear in the current administration that these spaces are going to become more and more dangerous for foreign-born students, for transgender people, for people of color,” Buff said.

Panelist Karyn Rotker, senior staff attorney at American Civil Liberties Union of Wisconsin, explained that detention of immigrant families can happen to legal citizens. Something as simple as not registering a change of address can lead to suspicion and separation.

Rotker said that U.S. Border Patrol agents are separating people “in a way where they didn’t even keep track in many cases of which child belonged to which parent.”

In May, the Justice Department and border authorities began prosecuting every adult who crossed the southwest border illegally, causing more than 2,300 children to be separated from their parents. After an international outcry, President Donald Trump signed an executive order on June 20 to stop the separations.

“I want folks to know that being undocumented is not a crime,” Rotker said. Unlawful presence, or physically being in the U.S. without documentation, is a civil violation, not a criminal one.

She said that 83 people were arrested in September in Wisconsin regarding documentation status, almost half of whom had no previous criminal history.

ACLU immigration rights efforts include dissuading local law enforcement from being part of President Trump’s deportation force, as well as encouraging immigrants, refugees and allies to participate in “know your rights” training, she said.

Protecting and expanding immigrants’ civil rights are an essential part of the mission of Voces de la Frontera. Voces has put pressure on the state legislature to address immigration issues and organized “A Day Without Latinos” on Feb.13, 2017, when thousands of people in Milwaukee left their schools and jobs to march to protest the 287(g) program.

The program allows the Department of Homeland Security to enter into formal agreements with state and local police to perform the functions of federal immigration agents, under the supervision of Immigration and Customs Enforcement (ICE).

Former Sheriff David Clarke proposed 287(g) training for Milwaukee County in 2017, but it was not approved. However, Waukesha County Sheriff Eric J. Severson endorsed the program and in July, amid heavy protest from groups such as Voces, Waukesha County jail officers received the training.

“The way things have changed now under Trump is that all of this anti-immigrant sentiment is now clear,” said Jasmine Gonzalez, communications coordinator for Voces. “He started his campaign calling Mexicans rapists and has debased and dehumanized these people who are good [people] and contributing towards society.”

Panelists emphasized that immigrants and refugees want to do well and be active contributors to their communities.

However, she has noticed the growth of anti-immigration sentiments and said that where she used to see hope among refugees entering this country, she now sees mostly fear.

Atta-Najeeb and Gonzalez said people should take note that in the November midterm election, Muslims, LatinX and allied populations mobilized to reject candidates that promoted “bigotry and hate.”

“People who had been citizens for years who thought, ‘my voice doesn’t matter, my vote won’t count,’ went out because this was their last hope that they could do something,” Gonzalez said.

For example, Evers said he would support granting state driver’s licenses for undocumented immigrants, as well as in-state tuition for Deferred Action for Childhood Arrivals (DACA) students, in a debate with Walker in October.

Community members are experiencing a great deal of anxiety about legislation on immigration, said Herbert De Leon, a Latino UWM student. His parents are naturalized citizens and while he does not fear for himself and his family, he is concerned for others.

“There are people who are scared to the point where they keep the lowest possible profile they can, which means that they don’t become informed about their own situations,” he said. He added that rather than feeling hope, he expects the worst and wishes for the best.