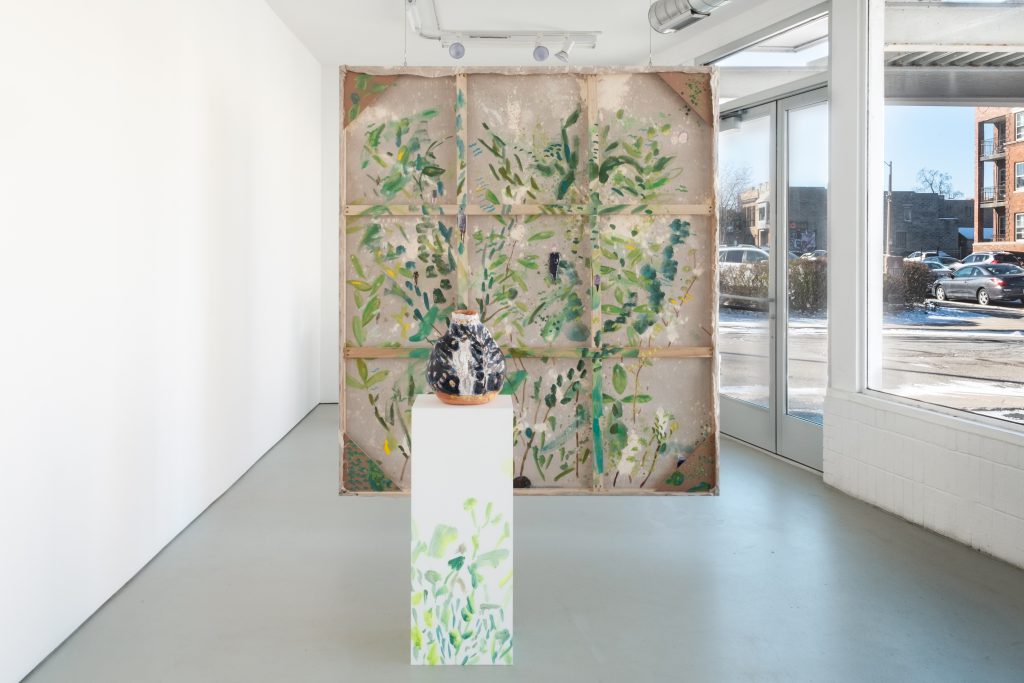 Artist Mari Eastman is based in Chicago; artist Jennifer Rochlin is based in Los Angeles. Yet they work together at times, including their latest exhibit, “Paintings and Pots,” on display through December 22 at the Green Gallery, 1500 N. Farwell Ave. The show is a fun mix of historical art forms with themes of nature, pop culture, fashion and fantasy.

Eastman works with quite a variety of artistic media and surfaces, including linen, burlap, charcoal, glitter, flasche (a type of acrylic paint), prismacolor, oil paint, and spray paint, to give her paintings a complex, layered look. Looking closely at the paintings like My Position, one can spot several human figures hiding in tall trees.

Eastman also uses etching techniques, evidenced in her Man Stretching painting, an outline of a man stretching against a rich purple surface. Fashion is a key focus of Eastman’s work, illustrated in paintings Untitled and fashion/2womenanimalspring, which portrays two stylishly-dressed women appearing to pose for a picture like fashion models.

According to gallery owner John Riepenhoff, who became familiar with Eastman’s work about a decade ago, the fantastical creatures and animals that appear in her paintings were originally meant to suggest the opening of Pandora’s Box, according to Eastman. But Riepenhoff says they could represent feelings that surface during an artist’s creative process.

“There are some soft moments, and some really punchy moments,” said Riepenhoff.

For example, the large double-sided painting Blue Studio/Back Yard (possibly a self-portrait of Eastman at work) depicts winged creatures, some smiling and some baring fangs, hovering over the artist’s head; the figure which is gripping an actual paintbrush (attached to the canvas) is portrayed with cat’s ears and a tail.

Eastman seems to have a particular fondness for cats, perhaps identifying with the animal’s unique personality and independent nature. Felines are the focus of her painting Pink Kitty Cats, a collage-like work with pinkish cats batting teal-colored balls.

Two striking paintings, Lion Owl Unicorn Textile and Wolves, are set against a nocturnal backdrop. Eastman is especially effective at creating snow—while looking at Wolves, you begin to feel a chill. In Lion Owl Unicorn, the shadowy creatures’ glowing red-orange eyes are especially creepy. The nighttime setting could possibly symbolize mystery, or even inner demons.

Eastman’s work appears in unexpected locations. The Ant Mural, a parade of ants (with a centipede here and there), is painted at the bottom of a portion of the gallery walls. In what could be considered a continuation of the artist’s studio scene, the back side of Blue Studio/Back Yard also has art, with greenery, a mouse, and other backyard animals.

The artists complement one another. For example, one of Rochlin’s ceramics sits on top of Eastman’s Flower Pedestal Mural, which has stems and yellow flowers painted on a pedestal.

According to Riepenhoff, Eastman was a fan of Rochlin’s work and suggested they do a show together several years ago. Both artists “have a very painterly style,” said the gallery owner.

Pots are glazed and painted with rich colors, featuring everything from coyotes to a Boston Red Sox baseball player, to Wonder Woman to James Dean to P22, a famous mountain lion living in Los Angeles’ Griffith Park. Rochlin also employs sgraffito, a European Classical technique made popular in Italy during the 15th and 16th centuries, wherein two contrasting colors of glaze are applied and the surface is scratched in places to show the bottom layer.

“I liked the idea of putting something so fleeting on a substantial, yet fragile object such as a pot,” said the artist.

Rochlin’s painted pots bring to mind drawings from a sketchbook—her human figures especially have a certain intimacy about them that draws the audience in, unlike classical art, which seems to require viewing from a certain distance.

The Tinder images “really speak to this time of social media, when stories are created and modified on an almost ongoing basis. This new type of personal narrative makes its way into the long lineage of storytelling on classical pottery,” added Rochlin.

Some of the artist’s designs, among them Blue, Yellow, Magenta Tapestry, appear to be inspired by Mediterranean and Turkish floor tiles.

Riepenhoff opened the unassuming Green Gallery (formerly housed in a Riverwest attic) on Milwaukee’s east side in 2008, in a former dry cleaner. The gallery, with its stark white walls, large windows, and skylight, is an ideal place to display work from local and national artists. The presence of natural light adds warmth to a gallery visit. 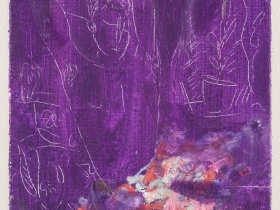 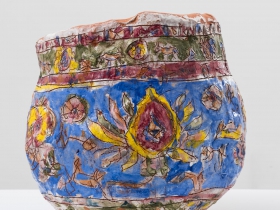 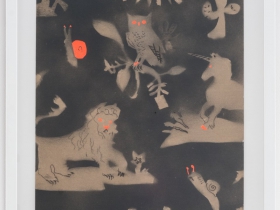 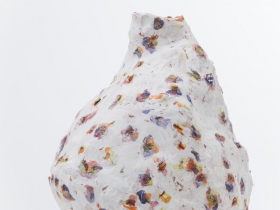 “Paintings and Pots,” through December 22 at the Green Gallery, 1500 N. Farwell Ave.