Production has show stopping numbers, but lacks heart and humanity. 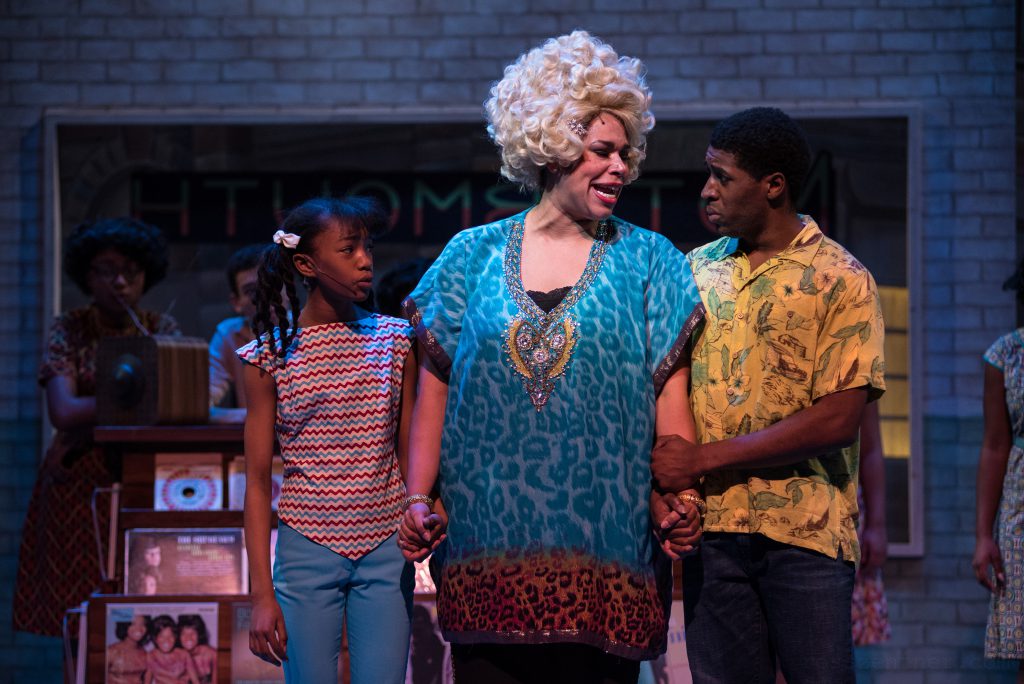 The musical Hairspray won a ton of Tonys for 2003 and was based on a notable 1980s absurdist movie comedy by John Walters featuring his favorite man pretending to be a woman, the drag queen Divine. Yet it doesn’t have a single song that made the charts nor one that stands at the center of any musical revue I know of.

That’s because every number sounds something like (but isn’t) a song from the 1950s and 1960s that did make the hit parade – do-wop, gospel, Motown, sock hop, odes to cities, jailhouse rock, love ballads. The echoes composed for Hairspray are clever enough to justify massive production numbers. With full energy and an overused pit band, every one of the tunes is activated to the hilt in the Skylight’s holiday offering through Dec. 30.

If you don’t love this musical to death from the start – I don’t — the show will pummel you into submission – and it almost got to me.

One reason is the full use it makes of some 17 area high school students to join the merry-making, up and down the aisles if needed. Much like Annie last Christmas at the Skylight featuring two squads of cute orphans from area schools, Hairspray is building in a notable audience of families and friends to see how well the youngsters do, and they do great.

There is also one notable standout for future shows – pint-sized Terynn Erby-Walker from Golda Meier school playing Little Inez and singing and dancing with the company’s best.

This is the sort of production that the audience roams its eyes over to spot standouts, like Erby-Walker. There is plenty of time to do so since the brain is hardly engaged. And often the standouts aren’t even being spotlighted.

One such find is Chicago area actress Ann Delaney — but not because of the excess caricature she plays as Penny, extremely gawky and adenoidal. Underneath all that you can detect a better singer and actress. There is some pushing toward the spotlight of another Chicago newcomer, Gilbert Domally as dancing whirlwind Seaweed Stubbs, but he makes better impact in his quieter moments.

Some nice cameos are provided by Skylight veteran Rhonda Rae Busch.  Another newcomer given too much spotlight yet more effective around the edges was Colin Schreier as preening love interest Link Larkin.

Clever work is put in for the usually unsung part of the cloying TV emcee Corny Collins, played by Skylight veteran Doug Clemens. More disappointing are Skylight veterans who are usually standouts – Rick Pendzich and Amber Smith, whose every outing here is overdone.

Director Lili-Anne Brown seemed mainly occupied in speeding the pace — the musical does seem built on staying in overdrive and the technical elements are not worth special mention. But perhaps she recognized the need for the occasional bursts of humanity, which were welcome when they came through.

Yes, all the characters are cartoons of musical comedy. But it is the souls under the cartoons that need to be at least touched on. The story may be treated as a joke – an overweight teenager seeking to integrate a 1960s TV bandstand show – but those chords of society’s cruelty to others need to poke through.

That is actually the main failure of Maisie Rose as the overweight central character Tracy Turnblad. Rose sings and dances adequately but the part while hugely exaggerated still needs the sense of a captivating heart underneath, not just words telling us she is attractive. The actress is going through the motions.

Similarly, Turnblad’s mom is the Waters movie “Divine” character– a massive woman played by a massive man to sashay and bump around the floor dripping one liners. But there is supposed to be some sorrow and humanity there as well, pretty well missed by Tommy Novak as he and his stage husband, the diminutive David Flores, play their physical differences to the hilt.

The audience seems in the mood to go along with making every number a show stopper – until we realize there is a genuine show stopper on hand that is going to take the spotlight if not given her.

That is Bethany Thomas, fresh from her one-woman triumph at the Rep Stackner Cabaret (“Songs for Nobodies”) laying down notable chops in “Big, Blonde and Beautiful” and a gospel finale.  It was almost unkind of the Skylight to place so first class a voice in the middle of this mix. 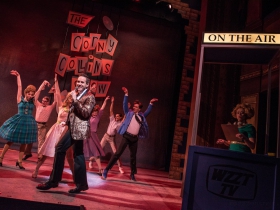 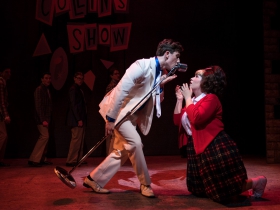 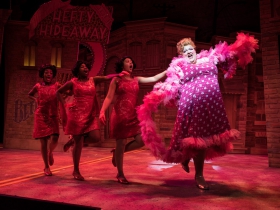 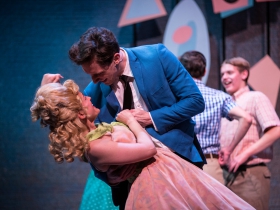 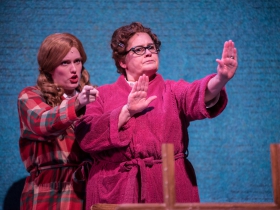 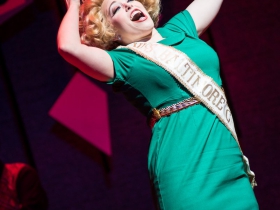