By Edgar Mendez, Milwaukee Neighborhood News Service - Nov 2nd, 2018 10:02 am
Get a daily rundown of the top stories on Urban Milwaukee 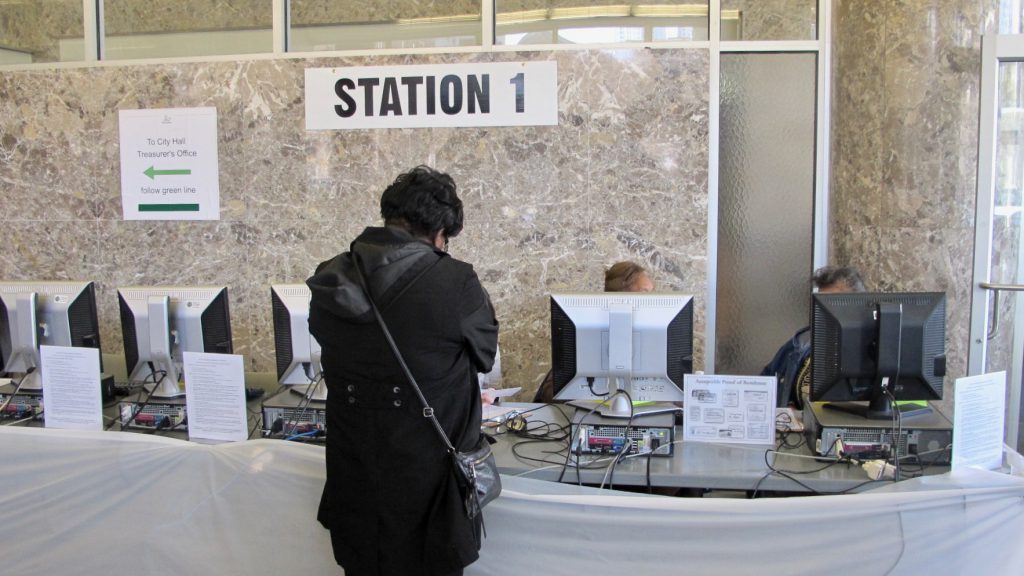 Voters in 16 counties, including Milwaukee, will have an opportunity on Nov. 6 to address a referendum question on marijuana. Photo by Edgar Mendez/NNS.

Wisconsin should legalize the use of marijuana, said Craig Johnson, president of the Wisconsin Justice Initiative (WJI).

“It’s time for Wisconsin to join the 21st century and end cannabis prohibition laws,” Johnson said during a recent press conference at the Milwaukee County Courthouse. Currently, recreational marijuana is legal in nine states while medicinal use is legal in 30 states.

WJI, ACLU of Wisconsin, MICAH and several state leaders, including Rep. David Bowen, are calling for voters to support legalization of medicinal and recreational marijuana by voting yes to the non-binding referendum question on their ballots Nov. 6.

In Milwaukee County the referendum question will be, “Do you favor allowing adults 21 years of age and older to engage in personal use of marijuana, while also regulating commercial marijuana-related activities, and imposing a tax on the sale of marijuana?” Variations of that question are also on the ballot in 15 additional Wisconsin counties and two municipalities. 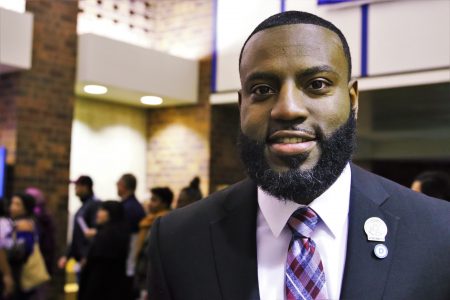 State Rep. David Bowen said legalizing marijuana would not only improve the economy in Wisconsin but could reduce targeting of minorities by law enforcement. Photo by Grace Connatser/NNS.

Legalizing marijuana not only creates economic benefits but it’s also a social justice issue, explained Molly Collins, advocacy director at the ACLU of Wisconsin. Collins said a 2013 report from the ACLU showed that statewide, African-Americans were six times as likely than white people to be arrested for possession of marijuana, despite similar rates of usage.

“Giving someone a criminal record for simple possession creates a lifetime of collateral damage. The punishment should fit the crime, and public opinion increasingly favors more sensible drug policy and a new approach to marijuana,” Collins said.

That report prompted ACLU’s national office to take a closer look at arrest data in Milwaukee, which led to a $3.4 million lawsuit settlement and reform of the city’s stop and frisk policy.

State Rep. David Bowen said that legalization would reduce the criminalization of black and brown communities and that it could free up resources for law enforcement.

“Law enforcement spends millions targeting people over the use of this harmless substance,” Bowen said.

He said it is essential that voters can ensure that their perspective is heard by voting on Nov. 6. “A lot of people are ready for progressive policy when it comes to marijuana regulation,” Bowen added.

Several members of the Milwaukee County Board of Supervisors, including John Weishan Jr., have voiced support for legalization and Supervisor Sylvia Velez-Ortiz has proposed a study on the possible economic impact of hemp cultivation, possibly at the Mitchell Park greenhouses.

In addition to Bowen, several other state legislators who represent Milwaukee, including Rep. JoCasta Zamarripa and Sen. LaTonya Johnson, have also publicly supported legalization. Johnson sponsored a marijuana legalization bill in the state senate and Bowen authored a bill that would remove THC — the primary active ingredient in marijuana — from employment drug tests, in an effort to bolster the state’s workforce.

“It’s an economic issue. We need people to fill jobs,” Bowen said of the bill.

On the flip side, Gov. Scott Walker has often spoken publicly about his opposition to legalizing marijuana, describing it as a “gateway” drug. According to the National Institute on Drug Abuse, some research suggests that marijuana use is likely to precede the use of other substances and the development of addiction.

Walker’s opponent in the Nov. 6 election, Tony Evers, has publicly stated that he supports and would sign a medical marijuana bill and believes that the referendum in Wisconsin would help determine whether full legalization should occur.

Wisconsin Attorney General Brad Schimel, a Republican who is also up for re-election on Nov. 6, said during a debate in Milwaukee that he is against legalization, while his Democratic opponent, Josh Kaul, supports legalization of medical marijuana. Much of the support for or against legalization falls along party lines, with Democrats in favor and Republicans against it.

Latina community organizer Luz Sosa said she has never been a marijuana user, but she supports legalization for economic reasons, suggesting an excise tax on sales to raise revenue for the state.

“That money could go back into public goods such as education and health care,” said Sosa, pointing out positive economic results in other states that have legalized marijuana.

Whether or not voters pass the referendum on Nov. 6, marijuana could still be legalized in Wisconsin, but approval would be an important step toward changing the state’s policy on cannabis, Bowen said.

“I think it opens up the conversation for folks on both sides of the aisle, but especially for Republicans,” he said. “They would have insight on how Wisconsin residents feel about going down that direction.”