4,000 people attended, mostly North Side residents, whose votes could be critical.

By Grace Connatser, Milwaukee Neighborhood News Service - Oct 30th, 2018 10:26 am
Get a daily rundown of the top stories on Urban Milwaukee 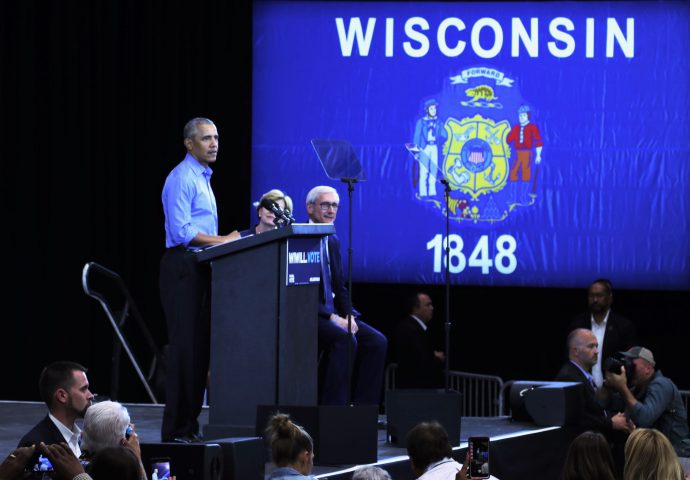 Andrea Anglin saw former President Barack Obama when he visited Milwaukee just over 10 years ago on Labor Day in 2008. He and running mate Joe Biden were on the campaign trail for their first terms as president and vice president. Since then, Obama has visited Milwaukee in 2010, 2012, 2014 and 2016.

Anglin didn’t think she would get the chance to see him again after his second term ended, but she was proven wrong. On Thursday, she picked up her tickets at the Democratic Party of Wisconsin office on King Drive. “I’m just excited,” she said.

“Having President Barack Obama here is even more excitement for people to get involved and get out the vote,” Anglin said. “I really stress the importance of voting for whoever you care for, whatever party, the concerns you have.”

Anglin began waiting in line at 10 a.m. at North Division High School, 1011 W. Center St., where Obama delivered remarks in support of Wisconsin Democratic candidates Sen. Tammy Baldwin; Tony Evers, running for governor; Mandela Barnes, candidate for lieutenant governor; and U.S. Rep. Gwen Moore and Randy Bryce, congressional candidates. Many were there hours before Anglin. The doors would not open until 12:30 p.m. for the 1 p.m. event, and 4,000 people eventually piled in. The halls were filled with residents of the North Side community.

Tequila Burris, one of those residents, said she hopes the advisory marijuana referendum appearing on many county ballots throughout Wisconsin, including Milwaukee County, will encourage people to vote who may not be invested in political figures, but care about policy issues. The Milwaukee County referendum addresses the legalization of recreational and medicinal marijuana in the state of Wisconsin.

Referring to nonviolent individuals who were convinced of possessing marijuana, Burris said, “Legalizing it will help return some of their rights as citizens so they can become successful individuals, whether in work, education or housing,” Burris said. She has a six-year-old nonviolent possession charge, which she said prevents her from receiving financial aid for her classes at Milwaukee Area Technical College. It also makes it difficult to find safe, reliable housing, which she said is especially concerning because she has a child.

Samuel Alford, who attended the rally with Burris, said it was important for the legacy of North Division High School for Obama to speak there. Alford attended NDHS for one year, and although his stay was short, he said the school “has a rich history” in the neighborhood. “It’s right in the middle of 53206, so we know 53206 is statistically the worst ZIP code in the nation (with) mass incarceration and all the poverty that’s faced here,” Alford said. “For him to come here, what’s deemed a bad neighborhood, shines a light here.”

Bowen said Obama’s visit was an important incentive for members of the black community to vote on the issues most important to them. He said they have “experienced political trauma,” having been promised investment and leadership opportunities without receiving them. “(Obama’s) not giving up on this neighborhood,” Bowen said. “He’s not giving up on black communities that are very thirsty for the chance to have transformational change in their neighborhoods.”

Lisa Pettis has been volunteering as a neighborhood canvasser for two years in the hope that she would convince someone to vote, even if it wasn’t for her own party. She said early voting helps working class people to get to the polls because Election Day isn’t a federal holiday and many North Side residents don’t have reliable transportation.

“Holding events like this, word of mouth, canvassing, you have to stay on it,” Pettis said. “We all need to come together and get out and vote.”

Obama spoke on many issues Democrats have raised throughout the campaign season, most notably healthcare, immigration reform and tax cuts benefiting the rich. He also heavily criticized Gov. Scott Walker, President Trump and other Republicans for “shamelessly lying” to constituents and playing on fears of border insecurity. “Wisconsin, don’t fall for that kind of fear mongering,” he said.

Obama pushed people to vote in the hope of historic voter turnout for a midterm election. FairVote.org reported that on average, about 60 percent of eligible voters nationally cast their ballots in presidential elections, and about 40 percent do so in midterm elections. The Pew Research Center also reported a 56 percent increase in voter turnout for 2018 primary races throughout the country earlier this year, with about a fifth of registered voters turning up at the polls. The report also says Democratic primaries had higher turnout rates than Republican primaries.

“The elevated primary turnout levels are further evidence that Americans are unusually engaged with this year’s midterms,” the report stated. “Voter enthusiasm is at its highest level for any midterm election in more than two decades.”

Obama remarked that low voter turnout has negative consequences for democracy. Yet, that seems to be changing, he said. “A great awakening of citizenship is happening across the country. … For the first time in a long time, people are organizing, marching and registering to vote.” Obama added, “The biggest threat to our democracy is our own indifference.”

Anglin said she will vote, and encourage others to do so for the sake of fairness and the democratic process.

“A lot of people feel that their vote(s) don’t matter,” Anglin said. “If you don’t vote, it’s a vote for the opposite party. Don’t be silent. Every vote counts.”