Chevy and the Packers Commit to Cancer Research 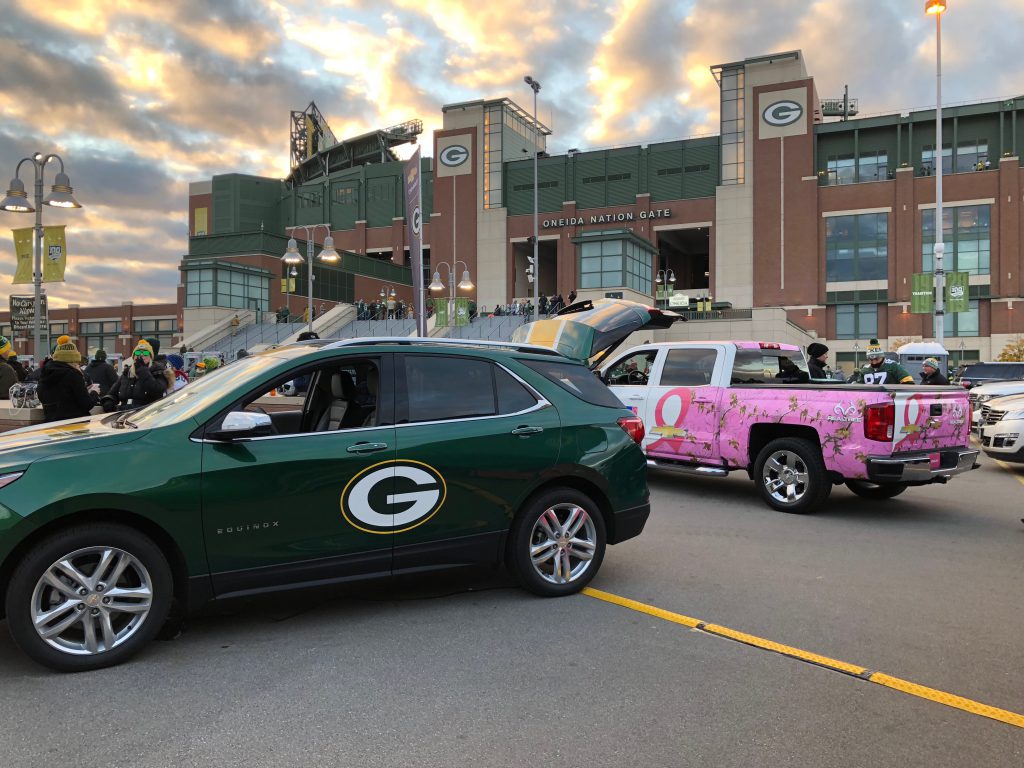 The game, a back-and-forth contest that featured the Packers winning on a last-second field goal, was the Packer’s annual Crucial Catch game designed to intercept cancer.

Chevy had a presence outside the stadium with a large booth centered around a pink Silverado and Packers-detailed Equinox, and inside the game with a social media campaign designed to drive awareness of a longstanding partnership with the American Cancer Society. The company and its dealers have donated nearly $10 million to cancer research to date, and a new campaign is designed to continue that commitment.

Approximately one week is left in the company’s #IDriveFor campaign designed to drive awareness of survivors and lost loved ones. For every tweet or Instgram post with #IDriveFor in October the company will donate $5 to the American Cancer Society, up to $400,000 total.

To help draw awareness to the campaign, the company provided a handful of guests with vehicles from its 2019 fleet to get to the game. I had the chance to test drive a new Chevy Silverado 1500 LT. The truck, which weighs approximately 450 pounds less than the 2018 model, seemed to effortlessly handle the drive to and from Green Bay. It was quiet, smooth and easy to handle.

Configuration options are virtually limitless with modern trucks, and I was able to take advantage of many of them in my short time with the Silverado. Parking the vehicle on city streets proved to be a breeze with a high-resolution backup camera and a front sensor to detect curbs, vehicles and other objects. The powered up/down tailgate allowed for easy access to the truck bed. I inadvertently triggered the automatic, low speed breaking in a parking lot when another vehicle entered the lot in the wrong direction. And Setting up the “Infotainment” system was a breeze, allowing me to stream podcasts from my phone without having to take my eyes off the road.