In their third debate AG candidates disagree on nearly everything. Again.

By Ximena Conde, Wisconsin Public Radio - Oct 17th, 2018 02:54 pm
Get a daily rundown of the top stories on Urban Milwaukee 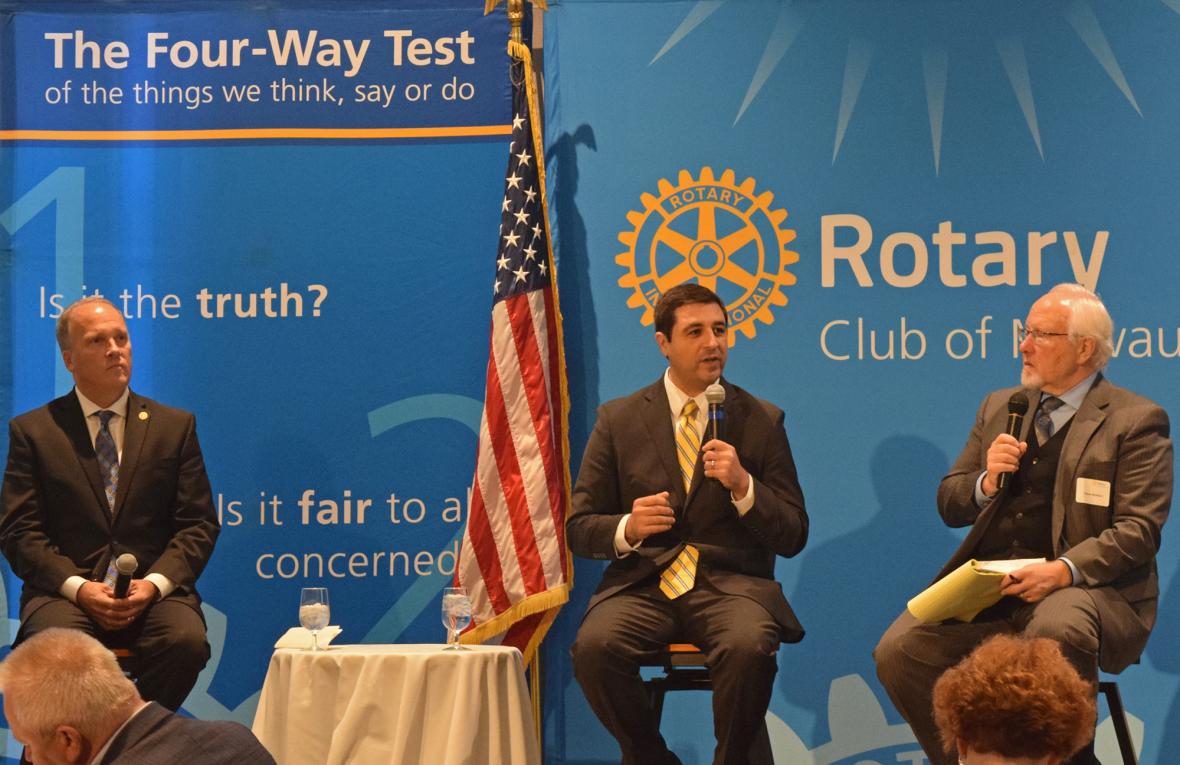 Wisconsin’s Republican Attorney General Brad Schimel and Democratic challenger Josh Kaul met in Milwaukee Tuesday — the third debate between the candidates. Similar to their first two appearances, Schimel and Kaul sparred over how to address the opioid crisis, school safety measures and the Affordable Care Act.

“Obamacare is going to collapse under its own weight, it’s a series of broken promises,” Schimel said, adding there are millions of American residents who remain uninsured under the program.

Kaul disagreed. He said the case against the ACA is weak and emphasized that if repealed, those with preexisting conditions would lose protections — something Schimel has conceded to in the past.

“I think we should be working to expand access to affordable health insurance coverage here in Wisconsin and working to reduce costs, not fighting to eliminate protections for people who have preexisting conditions,” said Kaul. But Schimel argued that that role falls on state and federal lawmakers.

Throughout the race, both Schimel and Kaul have pointed to the opioid epidemic as the biggest issue facing Wisconsin. And on Tuesday Schimel continued to tout the Department of Justice’s efforts to collect unused prescription medications — a move that has resulted in an overall drop in opioid prescriptions issued in the state.

“Mr. Schimel has been AG for three-and-a-half years now,” Kaul said. “So we’re not taking swift action by any stretch.”

In June 2017, Schimel announced he was joining a multi-state investigation into the top five opioid manufacturers. But Kaul would like to see the DOJ sue major pharmaceutical companies to see if they played a role in exacerbating the epidemic.

Schimel countered, saying cities like Chicago that have sued pharmaceutical companies will likely be tied up in litigation for years to come, and that his approach allows his office to go over evidence while simultaneously engaging in potential settlement discussions.

One area where the two candidates agreed was the use of drug-treatment programs instead of incarceration.

On school safety, Kaul maintained that the Department of Justice should avoid arming school personnel at all costs.

“If we arm teachers, there will be guns in our classrooms that introduces a danger that isn’t present right now,” Kaul said, adding that he supports gun-free school zones, universal background checks and a ban on bump stocks.

“If the state of Wisconsin Legislature decides to make that move, and a local school district with the support of their voters decides to permit teachers to be armed, and if any teacher chooses to be armed, I’ll train them,” he said.

Schimel and Kaul also weighed in on the role they believe the DOJ should play in addressing Wisconsin’s high incarceration rate of African Americans. Schimel said eliminating racial disparities is a matter of creating safe schools and family-supporting jobs. Kaul said the attorney general’s office should advocate for community policing, diversion programs like drug courts and expanding substance abuse treatment.

Schimel has served as attorney general since 2015 and Kaul is a private practice attorney in Madison who focuses on voting rights issues.