End of county bus routes 61 and 6 means no connection to jobs in other counties.

This is a story about transportation in two areas that might as well be different countries, they are so separated: the majority-minority City of Milwaukee and the overwhelmingly white surrounding suburbs in Waukesha and Washington counties. That separation was reinforced by the rebuilding and expansion of the Zoo Interchange expressway, which has helped facilitate and expand suburban sprawl in those counties.

The result of such decisions is not only residential segregation, but also a separation of city workers from family-supporting jobs in the suburbs. With that in mind, the Milwaukee Inner-City Congregations Allied for Hope and the Black Health Coalition of Wisconsin filed a lawsuit alleging that state planning for the Zoo Interchange failed to consider the transportation needs of economically disadvantaged and minority residents. They won a settlement in 2014, which called for $13.5 million in state funding to create bus routes to connect city workers to suburban and exurban jobs.

But the money would cover just four years and is running out at the end of December. So those two bus lines, Route 6 and Route 61, are about to be discontinued. And now no one seems to have a solution to the issue.

A new study by the UW-Milwaukee Center for Economic Development examines the impact of the “Job Lines” bus routes, as they have been called, and found “they provide service to 693 employers who have no other bus service besides one of these two bus routes. These establishments employ a total of 14,993 workers.”

The study found that 70 percent of passengers on the two bus routes are African-American residents of low and moderate-income areas of the north and west side of the city, and 66 percent of all users are taking the bus to travel to and from a job (and another two percent to get to job interviews) and are heavily reliant on public transportation because they have no access to a car (86 percent of riders) or lack a valid driver’s license (73 percent).

“The inner-city neighborhoods served by routes 6 and 61 include the most economically disadvantaged areas of the city, as well as the city’s most racially segregated areas,” the study noted. “Employment rates in these areas are more than 20 points below that of the Milwaukee metro area as a whole.”

Not only do the bus routes benefit workers, they also benefit the companies employing them. “Employers located along routes 6 and 61 are facing significant labor shortages,” the study noted. “Most employers interviewed for this study saw the JobLines as beneficial, either because their employees were presently using the service or because it was a way of enlarging their pool of job applicants.”

As one respondent to the study’s researchers said, “Finding [workers] is probably one of our top business issues. We always have openings. It’s frustrating.”

However, there was much more ridership for Route 61. “Ridership on route 61 has been growing steadily since the new line began operation in 2015,” the study notes. “Average weekday rides were above 800 for the most recent months for which data are available.” And support for transit service was expressed more strongly by employers along Route 61,  the study noted.

Route 6 runs along Moorland Rd. and eventually into a New Berlin industrial park, in an attempt to connect to big employers like FedEx and Dynatect. It’s an area of disconnected sprawl that can’t be served well by a fixed route bus line. 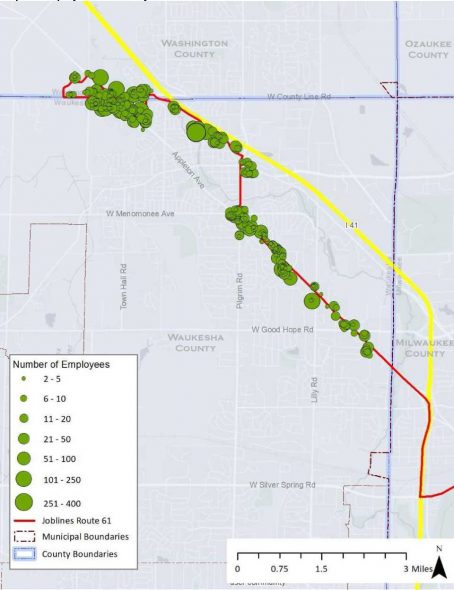 Route 61, by contrast, begins at Capitol Drive and 35th Street, running northwest along Appleton Ave. all the way into Waukesha County and Menomonee Falls and then into Washington County, terminating in Germantown. Because Appleton Ave. has some density, the line can connect to more employers, including Walmart, Home Depot, Target, Costco, Menards and Kohl’s.

But whatever the benefits of this line, both it and Route 6 are about to be discontinued. The Milwaukee County Transit System has concluded Route 6 has too little ridership to continue and Route 61‘s passengers within Milwaukee County can be replaced through an extension of Route 57, at no extra cost to the system. The plan was shared with County Board Chair Theo Lipscomb and is expected to win eventual approval from the county board.

Lipscomb declined to comment on the situation but Milwaukee County Executive Chris Abele did respond, saying “We would love to have the resources to expand transit options. Unfortunately, while local taxpayers are paying more to the state, the funds we’re getting back from the state are flat at best. We need the State of Wisconsin to work with local governments on a fairer funding solution.”

While there’s no doubt the state has been reducing transportation to Milwaukee County, the county would be unlikely to make Route 61 a priority even if more state funding did come. That’s because it simply wasn’t  cost effective enough.

“All of our routes are vital,” notes Brendan Conway, chief Marketing and Communications Officer for the transit system. The system provides about 120,000 rides a day and just 1,000 were on Routes 6 and 61.” So we also have to look at our 58 other routes along with these two and how that all fits into our budget and mission to serve Milwaukee County,” he notes.

Nor is there anything unique about taking riders to work, he adds. “45 percent of our riders say the main reason they take the buses is to get to work. The single biggest thing we do is get people to work.”

About 85 percent of the rides on Route 61 are within Milwaukee County. And those will be picked up by changes to Route 57. And while it’s a loss that workers won’t have a connection to those employers along Appleton Ave., the route was very expensive (about $2 million) a year and is beyond the mission of the transit system, which is to serve Milwaukee County.

While there a couple exceptions — Route 143 runs into Ozaukee County and Route 79 and the Gold Line run into Waukesha County — those two counties reimburse Milwaukee for that service. And neither Waukesha County nor Washington County has offered to pay Milwaukee to continue running Route 61.

Indeed, there has been few if any officials from either county to express the least concern about the Job Lines. One notable exception has been Waukesha County Board Chair Paul Decker, who says he is looking into ways to replace the service. But why is he only doing this now, months before the service is ending, when everyone knew for years this day was coming?

Decker says he’s been talking to employers served by the bus routes for three years, and “it’s never had consistent support.”

Even for Route 61, he says, “Employers from that area have not approached us overwhelmingly to say we need it.”

Of course Decker only serves Waukesha County and some of these employers are in Washington County. He concedes that getting the two counties to work together on this makes it far less feasible. But beyond that, he notes, there isn’t tremendous support for public transit.

“There’s always skepticism about investment in a fixed route system in a bunch of spread-out communities,” he says.

But many of the employers served by Route 61 don’t serve as many per business, or are big national chains like WalMart or Target, who seem unlikely to do that kind of outreach, creating a private bus to another county, in one of the countless areas in America they serve.

And whatever any of these employers might have said anonymously to a university researcher, they aren’t going to publicly push for bus lines to mostly minority workers in an urban center.

The reality is that Decker will likely find it hard to find any way to replace Route 61. At a time of very low unemployment, the biggest losers may actually be the employers. But long-term the separation between workers and companies in the metro area will continue to retard economic development and stall progress in the Milwaukee region.