Republican Senate leader says he lacks votes to pass bill, then says it could pass “in the future.”

By Shawn Johnson, Wisconsin Public Radio - Oct 17th, 2018 11:22 am
Get a daily rundown of the top stories on Urban Milwaukee 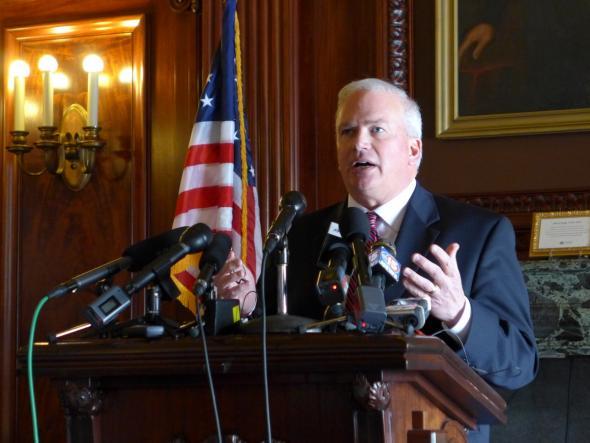 The Republican leader of the state Senate said Tuesday that he isn’t sure his chamber has the votes to pass a bill that would require insurance coverage of preexisting conditions.

But in a statement issued hours after his initial remarks, Scott Fitzgerald, R-Juneau, said that if it became necessary to cover preexisting conditions in the future, “the Senate would pass a bill to do so.”

The quick about-face underscored how important health care has become as an issue in the 2018 election season as Democrats look to seize on public support for the Affordable Care Act’s protections for people with preexisting conditions.

Fitzgerald was initially asked about a bill supported by Gov. Scott Walker that passed the Assembly in June 2017, but never received a vote in the state Senate before lawmakers adjourned.

The bill would spell out protections for people with preexisting conditions in state law, although experts say it would fall short of the ACA because it would let insurance companies impose a lifetime cap on insurance coverage.

Walker has said he would call the Legislature back into special session to pass the bill if the federal Affordable Care Act is repealed. Walker authorized Wisconsin’s participation in a lawsuit that seeks to overturn the ACA.

Asked about the state bill after a WisPolitics forum in Madison, Fitzgerald said he wasn’t sure it could pass the Senate because some of his members had concerns about imposing a health care mandate.

“I wouldn’t rule it out because obviously it’s generated a lot of heat during this campaign and the election cycle,” Fitzgerald said. “But I know I got members that probably are not onboard.”

Just four hours after Fitzgerald made his initial remarks, he released a written statement through his state office that took a different tone.

“Preexisting conditions are covered right now, and I support that policy,” Fitzgerald said in the statement. “If it becomes necessary to cover them in the future, the Senate would pass a bill to do so.”

It wasn’t the only area where Fitzgerald was hesitant to back a proposal Walker has highlighted on the campaign.

Fitzgerald also said he wasn’t sure the state could afford to return to funding two-thirds of the cost of public education, a pledge Walker made this week and Democratic gubernatorial challenger Tony Evers made earlier this year.

“I just get nervous when we kind of talk about those things not knowing where we are financially,” Fitzgerald said.

In addition, Fitzgerald downplayed a proposal by Democratic gubernatorial candidate Evers to offer 10 percent tax cuts to people who earn less than $100,000 per year.

“There’s all kinds of stuff flying around right now in the gubernatorial (campaign),” Fitzgerald said.

Fitzgerald has said he plans to call the Senate back in November for an extraordinary session to vote on another plan that would offer Foxconn-style tax credits to consumer products maker Kimberly-Clark Corp. He would need Democratic votes for the measure to pass because at least three of his GOP colleagues have said they won’t support it.

Fitzgerald said he’d also be willing to talk to Assembly Speaker Robin Vos about expanding the extraordinary session to other bills after the election, but he wasn’t ready to talk about which ones.

An extraordinary session would let Republicans take up legislation with the same majorities they have today: an 18-15 edge in the Senate and a 64-35 seat edge in the Assembly.

But it isn’t a given that Republicans will retain those majorities in January when the next Legislature is sworn into office.

Democrats are especially focused on taking control of the state Senate, where they’ve already won two historically Republican districts in special elections this year. Democrats would need to hold those seats and flip at least two more that are currently held by Republicans in order to regain the majority in the Senate.

“Obviously, we are looking at a majority,” said Senate Minority Leader Jennifer Shilling during a forum with Fitzgerald where the two discussed the 2018 campaign. “We are competitive in historically ‘red’ seats around Wisconsin.”

Fitzgerald said that as long as President Donald Trump‘s approval rating remained steady, he didn’t expect a so-called “blue wave” to hit Wisconsin, and he vowed that Republicans would hang onto the Senate.

“I feel good about where we’re at right now,” Fitzgerald said. “But I’ve been around long enough to know things can change quickly.”