The Strange Suit by Brad Schimel

Why try to end coverage of pre-existing conditions which 67% of Republicans support?

A basic axiom of politics is that elected officials align their policies to the interests of their constituents. It is not surprising, for example, that few officials in West Virginia or other coal-mining states advocate for less coal burning.

Yet, a federal lawsuit that Wisconsin’s Attorney General Brad Schimel is pursuing violates this rule. Schimel, joined by 18 other state attorneys general, asks a federal court to allow insurers to deny insurance to people with pre-existing conditions or to charge them more. This strikes me as both very bad politics and very bad policy.

Prior to Obamacare, insurers in the individual healthcare market commonly used so-called “medical underwriting” to decide whether an applicant for medical insurance was a good risk. If not, the insurer might deny insurance outright, charge a higher fee, or offer a policy that excluded coverage of the applicant’s pre-existing conditions.

An analysis from the Kaiser Family Foundation looks at medical underwriting in the individual insurance market prior to the ACA to assess what might happen if it were to return with the demise of the Obamacare requirements, based on the pre-ACA market for individual coverage.  From a review of several insurers’ pre-Obamacare underwriting manuals, Kaiser lists 30 common medical conditions that often led to rejection of an applicant. In addition, taking particular medications could result in rejection. Finally, at least one insurer listed occupations (including firefighters and taxi drivers) considered too risky to insure.

Kaiser also describes other strategies that insurers might offer instead of outright rejections. These included “rate-up” in which the applicant was offered a policy but at a higher premium or increased deductible. Another strategy would be to exclude a specified condition, body part, or system affected by the specified condition from the policy.

The ACA’s ban on these practices is enormously popular. For example, the most recent Marquette Law poll included the following question: 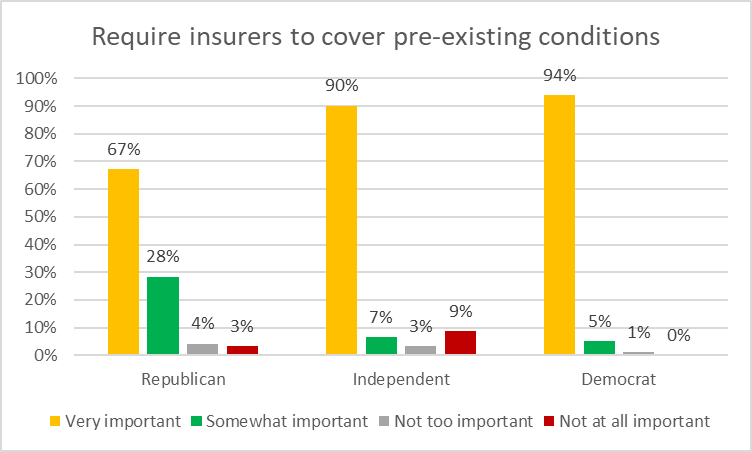 As remarkable as it is to see 94 percent of Democrats say this is very important, its even more stunning to see 67 percent of Republicans say so. There is overwhelming bipartisan support for the ACA’s prohibition on the use of pre-existing conditions by insurers.

The popularity of this ban stands in sharp contrast to the continuing partisan divide over the ACA itself, as shown below. As a number of observers have noted, Obamacare’s parts are far more popular than Obamacare itself. Even among people saying that Obamacare should be repealed, 90 percent said that the ban on the use of pre-existing conditions was either very or somewhat important. 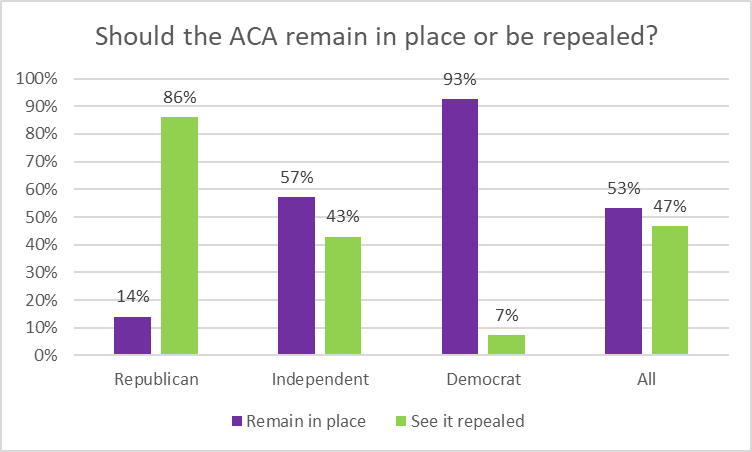 Should the ACA remain in place or be repealed?

Public support for the ban makes a pending federal lawsuit very strange. This case, called Texas v. United States, was brought by 19 states under the leadership of Texas Attorney General Ken Paxton and Wisconsin AG Brad Schimel, to challenge the Affordable Care Act’s prohibition on the use of pre-existing conditions by insurance companies. They ask the judge to declare that the “ACA’s guaranteed-issue and community-rating provisions” violate the US constitution.

Based both on the insurers’ pre-ACA underwriting manuals and nationwide health surveys, the Kaiser Family Foundation estimated each state’s average percentage of the non-elderly population with declinable pre-existing conditions. The proportion varied, ranging from a low of 22 percent (for Colorado and Minnesota) to a high of 36 percent for West Virginia.

One might expect that officials in states with the highest proportion of residents with pre-existing conditions would be the most eager to defend the ACA’s ban on considering those conditions. If so, one would be wrong. In the 19 states joining Schimel and Paxton to challenge the ban, an average 29 percent of the residents have declinable pre-existing conditions. For the 16 states and the District of Columbia intervening to defend the ban, the average declinable rate is 25 percent.

The box plots below offer a quick overview of the distribution of pre-existing conditions in the three camps: the plaintiffs trying to get rid of the ban (in red), the intervenors trying to protect it (in blue), and the remaining states (in green). The colored portions represent the middle half of the states. The lines extending out (called “whiskers”) show the full range. Disappointingly, only one high pre-existing condition state—Kentucky—decided to join the effort to protect its residents, and is shown as an outlier. 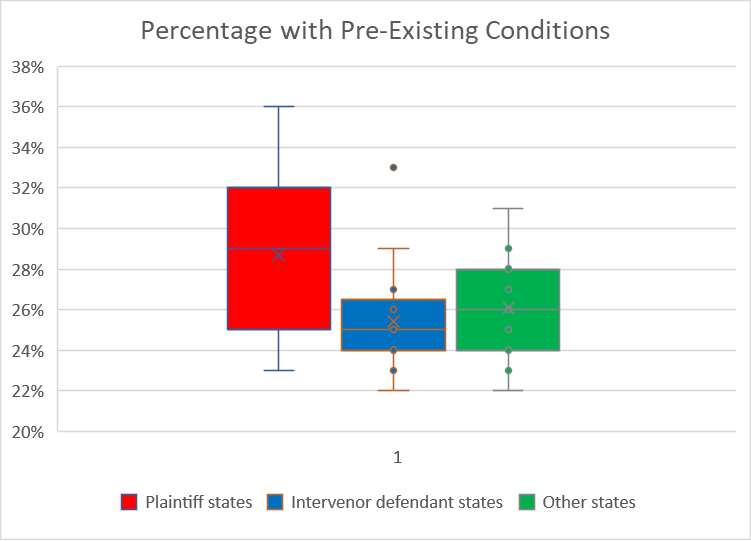 Consider Wisconsin. With an estimated quarter of its non-elderly population falling afoul of insurers’ pre-existing condition rules, its population is slightly healthier than average. Yet an estimated 174,000 Wisconsinites with pre-existing health conditions and who are either uninsured or in the individual market would be impacted if the ban were ended.

The Trump administration refused to defend the ACA’s pre-existing conditions rules. This was a break from standard practice—the US Justice Department is expected to defend US law even when it disagreed with it. Instead, the Justice Department argued that the court “should hold that the ACA’s individual mandate will be unconstitutional as of January 1, 2019, and that the ACA’s guaranteed-issue and community-rating provisions are inseverable from the mandate.”

This position contradicts Trump’s pre-election pledge to make sure that everyone has high quality health insurance. However, it is consistent with the administration’s so-far unsuccessful efforts since to put the ACA into a death spiral.

In response to criticism for trying to eliminate the ACA’s guaranteed-issue and community-rating provisions, Republicans insist they have no intention of denying insurance to people with pre-existing conditions. Senate candidate Leah Vukmir goes so far as promising to “fall in front of a truck before I would let people go without coverage for pre-existing conditions.” Notably absent is any hint of how she would fulfill this promise.

There are several reasons to conclude that Vukmir is lying. For one, neither she, Gov. Walker, President Trump, AG Schimel, or any other member of their group has offered a coherent plan that includes affordable coverage for people with pre-existing conditions. Secondly, to the extent that plans are offered they make coverage costlier by siphoning off healthy people. Finally, there is the example set by Trump of lying not only about health care but as to practically everything else.

Despite her reassuring words, Vukmir’s actions promise a return to the days of slicing and dicing the population based on health, age and sex. The big losers will be the people who most need health insurance, those with pre-existing conditions.

The attempt to restore insurance companies’ ability to discriminate based on pre-existing health conditions is very strange. Normally, in a democracy, elected officials are careful to defend the interests of their constituents. Apparently in this case, party loyalty and ideological purity are more important to these officials.

One thought on “Data Wonk: The Strange Suit by Brad Schimel”