Schimel and Kaul Debate The Issues

By Jenny Peek, Wisconsin Public Radio - Oct 14th, 2018 05:13 pm
Get a daily rundown of the top stories on Urban Milwaukee 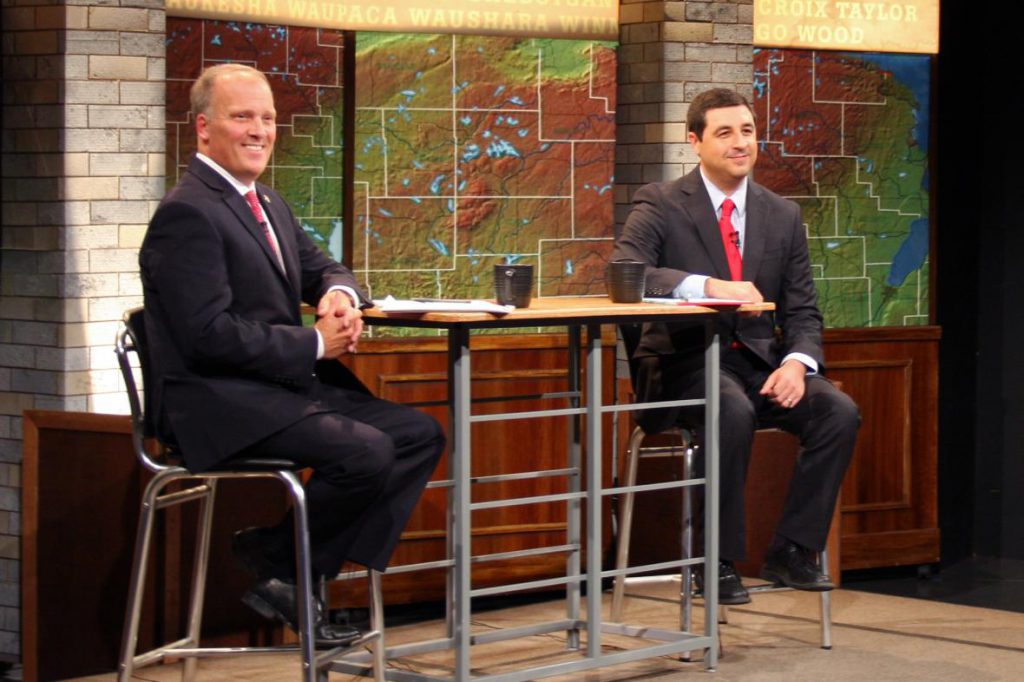 Attorney General Brad Schimel (left) and his Democratic challenger Josh Kaul (right) face off in their first debate of the season Friday, Oct. 12, 2018 in Madison. Photo courtesy of Jenny Peek/WPR.

But the topic that both Schimel and Kaul continued to come back to throughout the evening was the state’s handling of untested sexual assault kits.

In 2014, the state Department of Justice discovered some 7,000 untested sexual assault kits being stored across Wisconsin. In September, Schimel announced that that backlog was gone.

But in Friday’s debate, Kaul questioned why it took so long for the kits to be tested.

“In his first year in office, Wisconsin received millions of dollars to address that backlog, but after he served for two years as attorney general, only nine of the kits in the backlog had been tested,” Kaul said.

Kaul added that the delay in testing led to a delay in getting justice for survivors of sexual assault — a task he’d prioritize if elected.

“Now Schimel said mission accomplished, I fundamentally disagree with that, the goal here is not simply to test these kits, it’s to get justice for survivors of sexual assault and there’s a lot of work left to be done to get justice,” Kaul said.

But Schimel said he was proud of the work the DOJ had done in processing the kits, calling it a 25-year problem that he and his staff were able to solve in three years.

“On top of all the work we’ve done to solve the testing problem, we’ve also put in plan a procedure that’s going to make sure that this never happens again,” he said.

Throughout the campaign, both Schimel and Kaul have pointed to the opioid epidemic as the biggest issue facing the state, and it was another common thread Friday night.

Schimel touted the work that the DOJ has done in reducing the number of opioid prescriptions in the state.

“Our award-winning ‘Dose of Reality‘ prevention campaign is now being used in six states and it has reduced prescribing opioids in Wisconsin by 20 percent,” Schimel said. “And I created a drug take-back program in Wisconsin that has collected over 400,000 pounds of unused medications since I became attorney general.”

Kaul argued that the focus needs to be on targeting large-scale traffickers and providing better treatment to those who fall victim to drug addiction.

“We need to start responding to this epidemic like the crisis it is. First, I think we need to ensure that our enforcement efforts are targeting large-scale traffickers who are sending drugs like heroin and fentanyl and meth across county lines and state lines,” Kaul said. “We also need to expand access to treatment far more seriously than we have so far, so that people who fall into the trap of addiction are able to get the help they need to get back on their feet.”

Kaul also said he’d hold pharmaceutical companies accountable for their role in the opioid epidemic, referencing a lawsuit joined by states across the U.S. to sue opioid manufacturers.

Schimel has avoided joining the lawsuit, arguing it could derail a multi-state investigation into whether or not pharmaceutical companies played a role in exacerbating the epidemic.

Asked when they’d get involved in other federal cases, Kaul said he would have joined lawsuits when Net Neutrality was eliminated and when students alleged fraud against for-profit colleges.

Schimel pointed to his lawsuit challenging clean air standards implemented by the Obama administration, known as the Clean Power Plan.

“With the Clean Power Plan for instance, that was passed without following the rules and the Administrative Procedures Act, and it also exceeded the authority granted to the EPA by the Congress, and in fact the United States Supreme Court found our argument so compelling that they did something they’ve never done in the history of the United States, they posed an injunction, or stopped a regulatory rule, from going forward before there was ever a trial in the lower court and now the Clean Power Plan has been withdrawn,” he said.

The most recent Marquette University’s Law School poll found Schimel leading Kaul by a margin of 47-43 percent. Ten percent said they didn’t know who they would vote for.