It's the rationale for photo ID, but as rare as getting struck by lightning.

By Cameron Smith and Dee J. Hall, Wisconsin Center for Investigative Journalism - Oct 5th, 2018 10:02 am
Get a daily rundown of the top stories on Urban Milwaukee 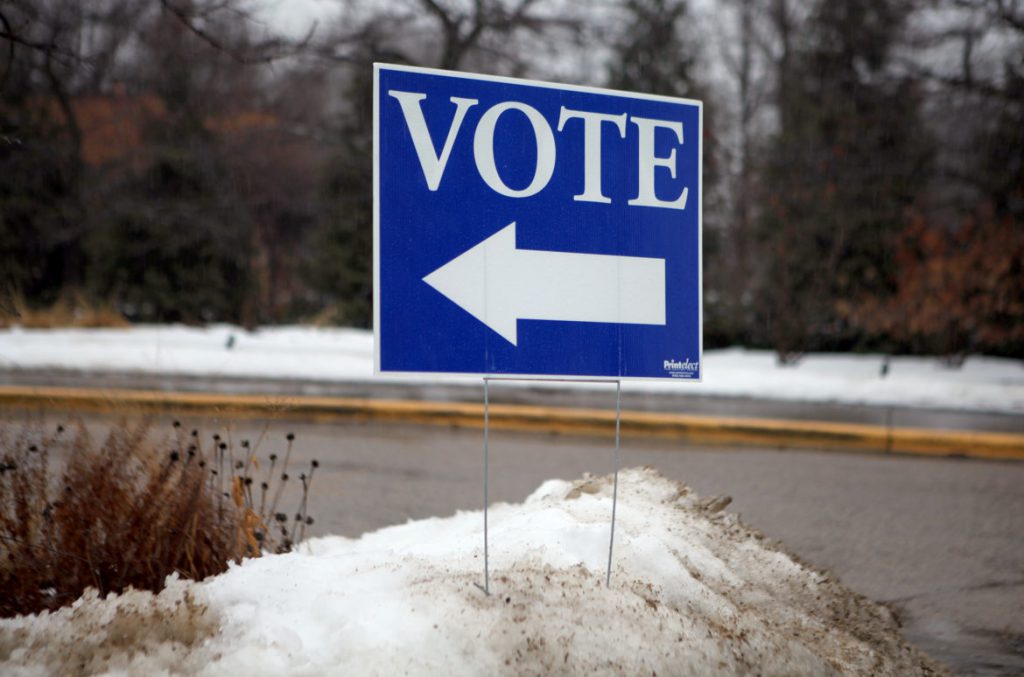 Over the past 13 years, voting has become increasingly difficult for students, the elderly and people of color due to the increase in states requiring voter identification at the polls. There are currently 34 states with voter ID laws, with Wisconsin having one of the strictest in the country. Here, a sign is seen outside the polling place at Olbrich Botanical Gardens in Madison, Wis., on Feb. 20, 2018. Photo by Coburn Dukehart/Wisconsin Center for Investigative Journalism.

Voter impersonation — the reason voter ID laws were passed in the first place — has largely been debunked as a pervasive problem in U.S. elections, according to a summary of investigations and studies compiled by the Brennan Center for Justice.  The law and policy institute out of New York University Law School focuses on campaign finance reform, mass incarceration and voting rights.

Former U.S. Attorney General Eric Holder cited a Brennan Center study when speaking at the University of Wisconsin-Madison in March.

“The likelihood for a person to cast a fraudulent ballot is as likely as a person to get struck by lightning,” said Holder, who now serves as the chairman of the National Democratic Redistricting Committee, which is pushing states to adopt nonpartisan processes for redrawing electoral districts.

“(Republicans) just can’t come up with the statistics that show that you have this problem of casting fraudulent ballots,” Holder said. “It’s clear that they are trying to rig the system. The president (Donald Trump) talked about during the campaign how the system was rigged. Well, I’m here to tell you, the biggest rigged system in this country is gerrymandering and voter ID laws.”

Earlier this year, Trump disbanded his voter fraud commission without making any findings. One of the commission members, Matthew Dunlap, Maine’s Democratic secretary of state, told NPR in August that the group never found evidence of Trump claims that millions of people had voted illegally in the 2016 election. He called voter fraud a “phantom menace.” 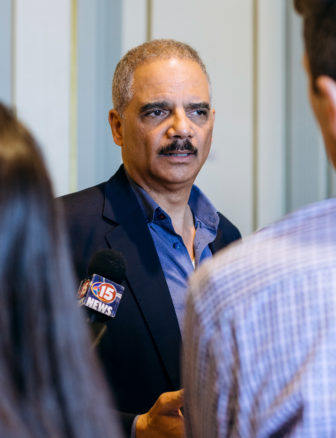 Former U.S. Attorney General Eric Holder answers questions from the press in Madison, Wis. after a campaign event for then-Wisconsin Supreme Court candidate Rebecca Dallet on March 16, 2018. “The likelihood for a person to cast a fraudulent ballot is as likely as a person to get struck by lightning,” Holder says. Photo by Cameron Smith / Wisconsin Center for Investigative Journalism.

Brian Klaas, a fellow in comparative politics at the London School of Economics, finds that voter ID laws may be a “deliberate plan” to disproportionately disenfranchise minority voters, particularly Democrats, through incurring costs on voting, whether it be time or financial.

“It’s also the reason why you have so many lies, frankly, about voter fraud,” Klaas said. “Every single study on voter fraud has found that its a miniscule problem and almost always has non-nefarious intent.”

Before filing its 2015 federal lawsuit, One Wisconsin Institute filed open-records requests for all complaints of voter fraud from “every single legislator” who claimed to have received them, according to program director Analiese Eicher.

Of the 15 who had records, they consisted of unverified constituent complaints, news articles about the less than two dozen reported cases in Wisconsin since 2004 and a “widely discredited” anonymous report on alleged fraud in Milwaukee, the group said.

Fifty lawmakers said they had no responsive records. Eicher said lawmakers “had to swear under oath in our lawsuit that voter fraud didn’t exist — which was fun watching that happen.”

Nevertheless, the myth of widespread voter fraud persists, especially among Republicans, according to the June PRRI/The Atlantic survey funded by the Joyce Foundation, which also supports the Wisconsin Center for Investigative Journalism’s coverage of democracy issues. It found 52 percent of Republicans and 31 percent of Democrats believe a major problem with U.S. elections is “people casting votes who are not eligible to vote.”

This story was produced as part of an investigative reporting class in the University of Wisconsin-Madison School of Journalism and Mass Communication under the direction of Dee J. Hall, the Wisconsin Center for Investigative Journalism’s managing editor. The Center’s collaborations with journalism students are funded in part by the Ira and Ineva Reilly Baldwin Wisconsin Idea Endowment at UW-Madison. The nonprofit Center (www.WisconsinWatch.org) collaborates with Wisconsin Public Radio, Wisconsin Public Television, other news media and the UW-Madison School of Journalism and Mass Communication. All works created, published, posted or disseminated by the Center do not necessarily reflect the views or opinions of UW-Madison or any of its affiliates. The Center’s coverage of democracy issues is supported by The Joyce Foundation.