Humor and Horror at the Taj Mahal

Milwaukee Rep’s ‘Guards at the Taj’ is a gripping mix of fantasy, history, comedy and tragedy. 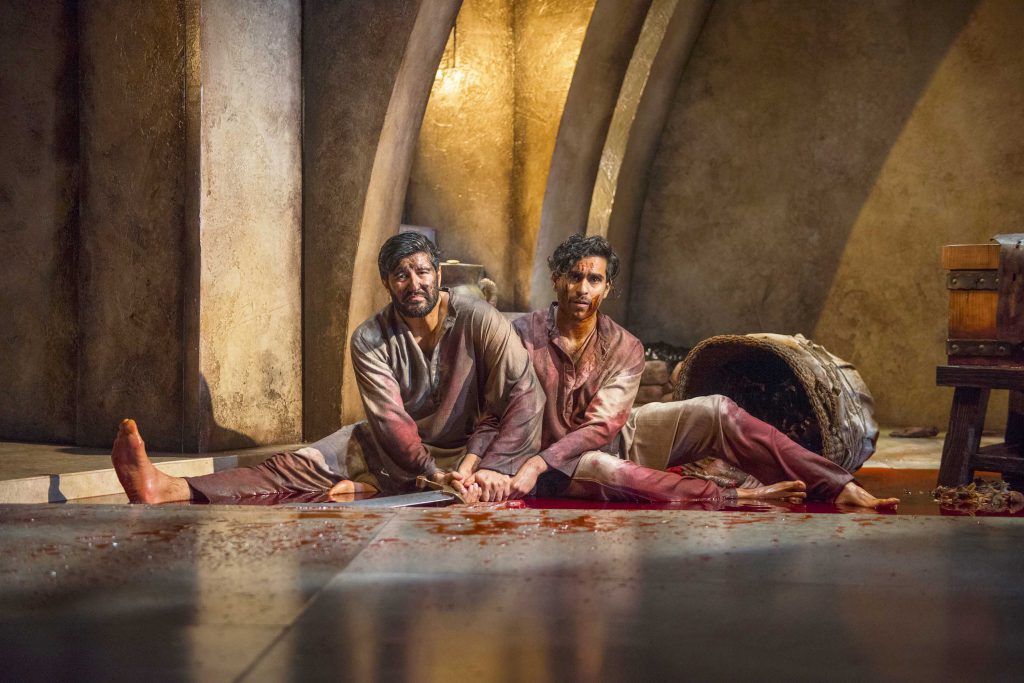 There has long been a special feel and innovation to the Milwaukee Repertory Theater’s offerings at the Stiemke Studio, partly because its choices, technical staff and performance styles seem freer to take steps into the unknown and the uncertain, where good theater often lives.

The latest unknown title, Guards at the Taj, proves a gripping 75 minutes of comedy between stumblebum sentinels turning into dark horror and human tragedy through Nov. 4.

The playwright, Rajiv Joseph, has won awards and sizable runs for such creations as Tiger at the Baghdad Zoo — and his language and stage instructions take flights into fantasy, history and connections that comment on our times as they send us into unexpected worlds.

There is sometimes a rawness of purpose in his framework, but it is grand fun to enter his visions. His gifts of language and human behavior evolve from Bowery Boys street hijinks  to political comment on the divine right of kings and then into poetic hallucinations as we spend time with two imperial guards in the 17th century at the unveiling of the Taj Mahal.

Sixteen years in the making, marvel the guards who are not allowed to look at this most wondrous of creations. Twenty thousand artisans hired by the ruling shah to honor his late wife with a shrine of ultimate beauty. Myths then evolve that all those artisans will have their hands cut off when their work is done so no other such feat of beauty can be produced. And guess who will have to do the slicing and cauterizing.

A myth, perhaps – but what theater! If presented as real. In this tale the Rep employs extraordinary yet believable special effects utilizing body parts, props, drains, urns, cloths and baskets to add detail to Joseph’s flowing imagination. It sets loose two friends in the military who must cope with this circumstance and attending fantasies, played by Yousof Sultani as the serious one and Owa’Ais Azeem as the fanciful one, whose dreams of the future come off as too pointedly exact – as if Leonardo Da Vinci was guarding the palace in India.

The actors range from vaudeville interplay to comic Grand Guignol (horror shows) to genuine horror and back as the play transports them and us on its mental flights, which include birds and jungle dreams.

For the actors it is a challenge to make natural buddy interplay transfer into high drama and then frightening emotional kicks in the audience’s guts. At first I feared it would be too hard for them to make the transition from Laurel and Hardy to visceral engagement, but I underestimated the talents of Sultani and Azeem who keep true to their original characters. The actors handle the play and its enormous physical demands with genuine commitment.

The play’s progression is anchored in a special kind of theatrical reality. What happens can’t be real, but the actors and technical elements combine to make it seem real, so much so that the ending, or the two endings, create a hypnotic echo in the mind.

Director Brent Hazelton not only commands the actors’ finesse but recognizes how much of the play relies on the believability of Scott Davis’ Persian cavern set, Alison Siple’s misleadingly simple but utilitarian costumes, Noel Stollmack’s lighting shifting our focus and Barry G. Funderburg’s crashing ominous sounds and music. Without these combined technical skills — and I suspect there are more hands that should be credited — the play could not move so seamlessly into a fantastical, brutal and touching world. Nor could it even approach being well done by companies with lesser technical skills to muster. Because of that, you are unlikely to see neighborhood revivals of this play and your time to enjoy it is limited.

It would not be right to give away too much of what happens, but the playwright is also giving us a lot to think about in terms of autocratic leadership, dreamy followers and blind obedience. The world around the Taj Mahal is not that much removed from Orwell’s 1984.

Guards at the Taj Gallery 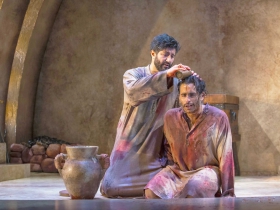 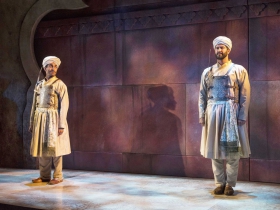 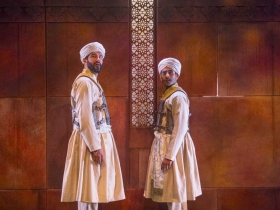 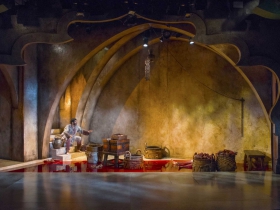 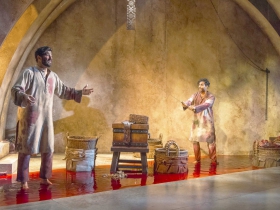 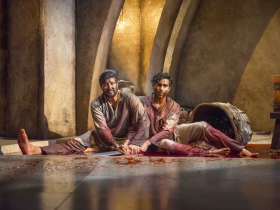