Bike to a Bucks Game

Too Much Metal and Fuel Cafe will lead a ride on November 4th. 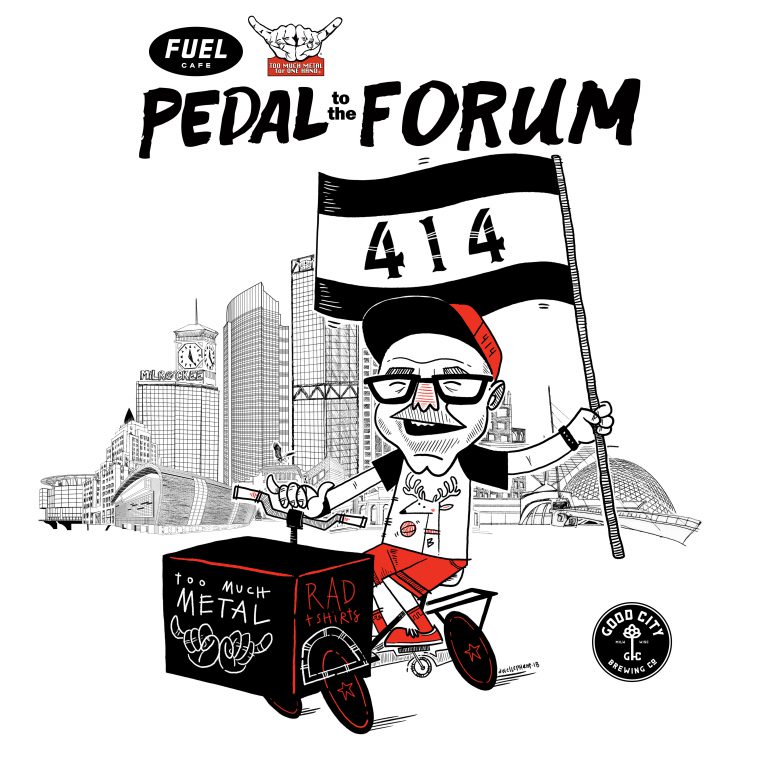 Pedal to the Forum. Image by Too Much Metal.

The Milwaukee Bucks play their games during the coldest months of the year, but that doesn’t mean you can’t bike to a game.

The parking garage built in conjunction with the new Fiserv Forum features a large amount of covered bicycle parking. The rebuilt W. Juneau Ave. outside of the arena even includes bicycle lanes. But still, it’s hard to imagine cycling to cheer the deer without an even bigger boost.

Fuel Cafe and Too Much Metal are aiming to change that. The cafe and clothing company are teaming up to organize a ride from Fuel’s S. 5th Street location to the Bucks game against the Sacremento Kings on November 4th. The Sunday game tips off at 2:30 p.m., meaning the ride to and from occurs in the daylight. The ride to the game leaves Fuel, 630 S. 5th St., at 1 p.m.

“We’d love to have a parade of bikes going to see the Bucks game. We’re riding over the 6th Street viaduct to the Forum to make some rad. We want all kinds of bikes, people and Bucks costumes,” said Too Much Metal’s Fred Gillich. “We’re hoping that Milwaukee is into bikes and the Bucks. We want to grow this ride into a critical mass type thing, so let’s start a new tradition.”

For $50, participants receive a ticket to the game, a pair of Cream City socks from Too Much Metal and two Good City Brewing beers at Fuel.

The Phoenix Suns, who play in a substantially warmer client, were the first team to embrace the concept of bicycling to basketball games. The team began offering valet bicycle parking in 2009.

Gillich has become increasingly invested in cycling this year through the purchase of a tricycle-mounted clothing stand. The shop-on-wheels can be spotted at a number of street festivals around town.

Too Much Metal, which has a number of items centered around “414,” refers to the new arena as the Four One Forum. T-shirts and stickers are available.

Those who already have purchased tickets to the game are welcome to join the ride.