How An Immigrants’ Son Changed the City

Joe Zilber’s philanthropy is improving poor neighborhoods on north and south side. 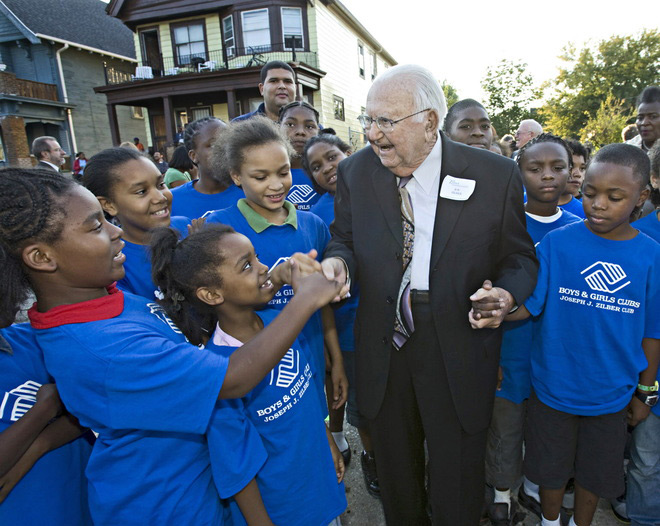 Joe Zilber gets a warm welcome from members of the Joseph J. Zilber Boys and Girls Club in September 2008 when he announced the Zilber Neighborhood Initiative grant at Walnut Way. Photo by Michael Sears courtesy of the Zilber Family Foundation.

“Joe Zilber was both smart as a whip and had a deep, deep reservoir of goodwill and compassion,” said Susan Lloyd, executive director of the Zilber Family Foundation from 2008 to July 5. “(He was) a true entrepreneur and never saw anything but opportunity. And he understood the relationship of blocks to neighborhoods, neighborhoods to cities and cities to regions in terms of their economic prosperity.”

Zilber grew up in a family with a strong work ethic. He started his first job, hawking newspapers, when he was 6, Jackson said. He went on to earn a fortune in the real estate business.

Her father was shocked and saddened to see the neighborhood where he grew up deteriorate, Jackson said. “He was very passionate about Milwaukee,” and as he got older he wanted to make a difference in his hometown.

“(My parents) felt they’d been really blessed so they made a pact to give back so that others could have a better quality of life,” she said. Joe Zilber endowed the Zilber Family Foundation and was the driving force behind the Zilber Neighborhood Initiative until his death in 2010 at age 92.

Zilber hired Susan Lloyd, then a consultant operating her own firm, to help him get the Zilber Neighborhood Initiative started, she said. “It was something I had done for other clients, like help them figure out what they wanted to fund, maybe set up their structure, maybe even help them find staff and oftentimes help them make the first set of grants.” When he asked her to leave her firm and run his foundation full time, she hesitated but ultimately could not resist.

“It was clear to me that the opportunity initially in Clarke Square and Lindsay Heights was a very distinctive chance to do something that I had always wanted to do,” Lloyd said, which was to work alongside people in neighborhoods above and beyond funding. “They know what’s been tried and failed. They know what’s likely to work.”

The Zilber Family Foundation embedded itself in the neighborhood and helped neighborhood leaders plan, frame projects, connect to a multitude of other resources and provide “continual questioning and support,” said Sharon Adams, co-founder of Walnut Way Conservation Corp.

Staff at the Zilber foundation and Lindsay Heights community members have come to love each other, Adams said. “We understand each other. We communicate well. We have shared values, goals and visions.”

Jackson said the foundation will spend the next few months working on its strategy going forward. “I can’t tell you more at this point other than we will renew our commitment to Milwaukee,” she said.

According to Walnut Way Executive Director Antonio Butts, “The capacity that Zilber has enabled our neighborhood organizations to develop can’t be overstated. Without Zilber, Lindsay Heights would look like a completely different place.