Looking Backwards With a Smile

Tyanna Buie’s art is a fragmented celebration of family and childhood memories. 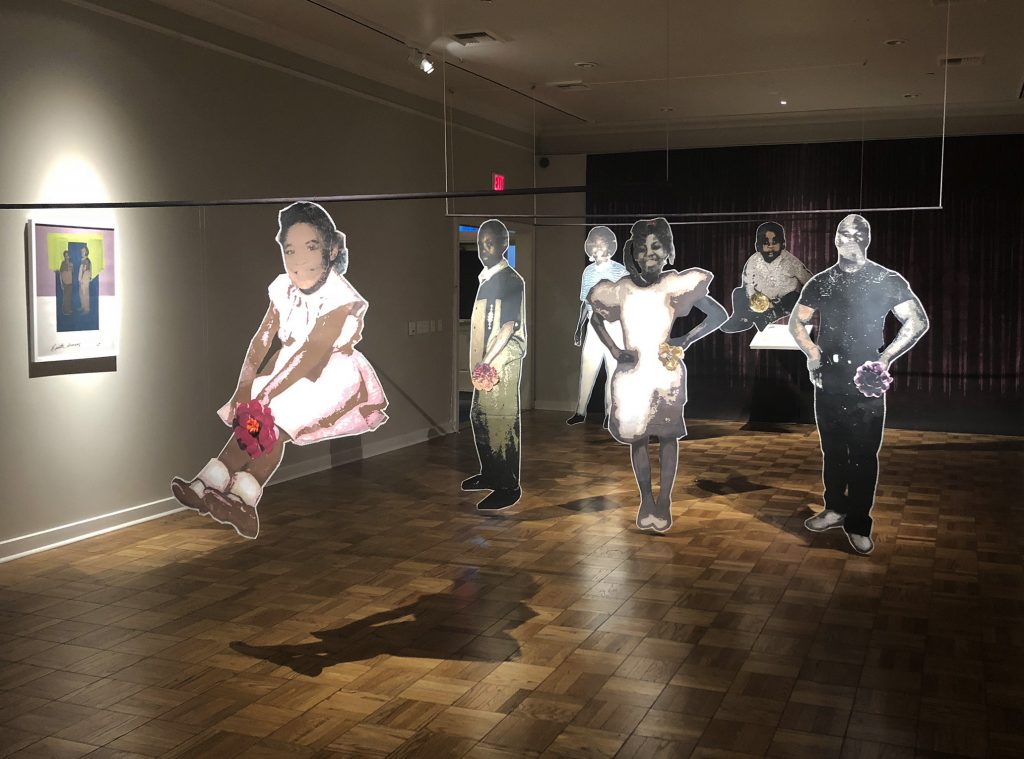 Artist Tyanna Buie had an upbringing that sounds tough: she was placed in foster care at an early age, growing up on Chicago’s South Side. She recalls living in a household with her aunt and eight other children. Yet there is a cheeriness to her work that is one of the surprises of this exhibit, called “Im∙Positioned,” now on display through November 25 at the Lynden Sculpture Garden, 2145 W. Brown Deer Rd.,

Buie, choreographer Reggie Wilson, visual artist Folayemi Wilson, filmmaker Portia Young, and batik artist Arianne King Comer, are among the Call and Response artists who “share a commitment to the radical Black imagination as a means to re-examine the past and imagine a better future,” according to Lynden’s website.

Lynden executive director Polly Morris says she has known Buie, who lived in Milwaukee and received a Mary L. Nohl artist fellowship in 2012, for years. “I’d been looking for opportunities to work with her,” Morris says.

“Im∙Positioned,” features the Hanging Power Pose Series-#1-6, six screen-printed full-sized paper figures of children and adults. The figures are suspended by thin wire on three metal rods, which were repurposed from Comer, who contributed to the recent exhibit “Ibile’s Voices.”

“Im∙Positioned” also includes three smaller works of art, two of which are placed on the gallery’s stark white walls.

Set against the backdrop of a paper curtain painted in rich purple hues to mimic fabric, (a detail inspired by Reggie Wilson, founder of the Brooklyn, New York-based performance group Fist and Heel), the exhibition feels cheerful and orderly. Figures appear to be set an equal distance apart. Many depict children dressed for a special occasion, perhaps Easter Sunday or a birthday party. Two are embellished by metal flower pins on their hands. The figure in the middle of the exhibit, a preteen girl with a broad smile, dressed in her Sunday best, represents Buie herself as a child. These are happy events suggesting a bright future.

Buie says that while creating the Hanging Power Pose series, she was “thinking about moving figures through space on a stage” and wanted to represent how families tend to pose for pictures.

Buie received her BA from Western Illinois University and her MFA from the UW-Madison. She has exhibited at numerous museums and universities, including the Milwaukee Art Museum, Lawrence University, Detroit Artist Market, the Museum of Wisconsin Art, and the Haggerty Museum of Art, and has taught printmaking workshops and hosted demonstrations in Milwaukee and Madison.

The artist now lives in Detroit, Michigan, where she serves as an assistant professor and section chair of printmaking for the College of Creative Studies.

Using family photos her aunt loaned her, Buie began to reassemble her past on paper in 2016. Many of the photos were chest and head shots, and the artist wanted to use full-length shots, of which there were only six. The artist plans to use the rest of the photos in the future.

At first glance, Buie’s figures appear straightforward and true to form. Although a bit faded, like old newspaper photos, the subjects’ facial features are clear.

“When you are in printmaking, you are taught very traditionally,” Buie notes.

However, Buie is not afraid to experiment with abstraction, employing mixed media in her art. Faces are left blank, and often set against brightly-colored backdrops in works like “Father and Sons II” (monotype and Swiss manufacturer Caran D’arche colored ink); which is reminiscent of a watercolor painting; “Front Porch II” (screen print/monotype, hand-applied ink on paper) and “Dress Rehearsal” (screen print with hand-applied ink on paper).

Layers of ink — green, brown, black, pink, blue, white and yellow — applied to the figures are symbolic of childhood memories that are fragmented, yet rich in detail. Faces of the figures are reminiscent of old newspaper photos: faded, but clear enough to be distinguishable.

The figures, arranged in three neat rows, are all different heights and face backwards—representing the lens of retrospection.

Buie’s exhibit “is an apt metaphor for dealing with her past,” says Morris.

Although a concern arose that the Im∙Positioned figures, held up by metal rods several inches from the ground, could be interpreted as multiple people being lynched, Buie emphasizes that is not at all her intent.

She feels that African-American history tend to focus on slavery, racism and hardships, but one important component—celebration–is largely ignored. “There are so many parts of the African-American narrative that never get told,” she says.

There is some parallel in this show to the Lynden’s 2016 installation by Folayemi Wilson, “Eliza’s Peculiar Cabinet of Curiosities,” a reproduction of a nineteenth-century slave cabin containing a mix of unique and practical items. Im∙Positioned, too, looks backward with a sense of curiosity, but in more personal way, paying tribute to Buie’s past and family, with an optimistic look towards the future. 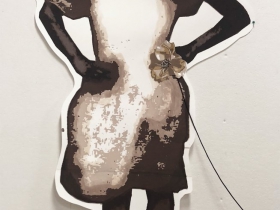 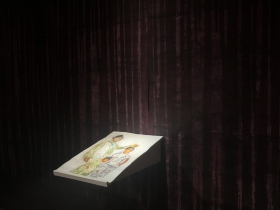 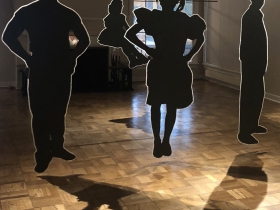