The Case for Single Payer Care

65% in this state get insurance at work. Would they support Medicare for All?

The Affordable Care Act substantially reduced the number of Americans lacking health insurance, but it fell well short of the goal of covering everyone. Rather than look for ways to fill the gap, President Trump and the Republican Congress focused on proving that Obamacare wouldn’t work. As a result, the number of people without insurance increased substantially since 2016, both nationally and in Wisconsin.

Current Republican proposals are targeted at further increasing the number of uninsured. For example, Leah Vukmir’s campaign website lists nine issues, including guns, right to life, taxes and spending — and repealing Obamacare. She fetishizes the free market without understanding it:

Leah supports replacing Obamacare with free-market solutions that will lower costs and premiums. For example, Leah would allow insurers to offer a wider variety of plans that fit the demands of patients and families, not government central planners. And she would support allowing individuals to buy insurance across state lines, increasing competition and choice.

Vukmir’s plan, such as it is, seems aimed at returning us to the pre-Obamacare health care economy, where very bad plans competed on price, and those with pre-existing conditions found insurance unavailable or extremely costly. Allowing interstate sales would likely cause insurers to base their offerings in states with the weakest regulations.

Plans to take away people’s health insurance does not seem, on the surface, to be a compelling reason to vote for a candidate. The fact that Vukmir makes it suggest she hopes to win by motivating the conservative base.

Given the lack of viable solutions from the right, it is not surprising that Democratic candidates have chosen to emphasize the right to healthcare. The desire to make health care more available has motivated doctors and other health care workers to run for Congress.

The current fixation on a single payer system or “Medicare for All” may get in the way of the goal of universal coverage, if it leaves the impression that it is the only route to the goal. During the last presidential election the Urban Institute analyzed Sanders’ bill. Here is the summary of their findings.

Presidential candidate Bernie Sanders proposed a single-payer system to replace all current health coverage. His system would cover all medically necessary care, including long-term care, without cost-sharing. We estimate that the approach would decrease the uninsured by 28.3 million people in 2017. National health expenditures would increase by $6.6 trillion between 2017 and 2026, while federal expenditures would increase by $32.0 trillion over that period. Sanders’s revenue proposals, intended to finance all health and nonhealth spending he proposed, would raise $15.3 trillion from 2017 to 2026—thus, the proposed taxes are much too low to fully finance his health plan.

Contained in this summary are two separate issues. One is the effect on national health expenditures. Sanders claims that they would go down, mainly because of a cut in payments to doctors, hospitals, and other providers and less paperwork. This saving, he and his supporters argue, would more than compensate for the increase in services due to covering more people and making services free. Lending plausibility to this scenario, is that the cost per capita of the American healthcare system substantially exceeds that of any other country.

In response, the authors of the Urban Institute analysis go through each point. I believe they make the more plausible and thoughtful case.

The second issue is the increase in federal government expenditures due to the conversion of private spending into government spending. From society’s viewpoint, this is more an accounting problem than a real problem. The issue depends on the argument that paying taxes to pay doctors is somehow much more threatening to democracy than paying insurance premiums to pay doctors.

However, it could be a political problem, especially because the conservative establishment has spent years arguing that large government threatens liberty. The fact that there is no evidence to support that proposition may not be relevant from a political standpoint.

The threat from government is not because of its size—most recipients of Social Security and Medicare benefits don’t find them threatening. The danger from government is when it tries to leverage its payments, as with Medicaid or food stamps in Wisconsin, where Republicans are denying coverage to those who aren’t working or have used drugs. Ironically, it is conservatives these days who are most likely to fall for this temptation.

Sanders envisions single payer as replacing all other forms of health insurance. According to the Kaiser Family Foundation, in 2016, the most recent year for which figures are available, a majority of working age Americans — 56 percent — got their health insurance through their employers, as shown below. This number was much higher than those in “non-group” plans, which include those on the Obamacare exchanges. 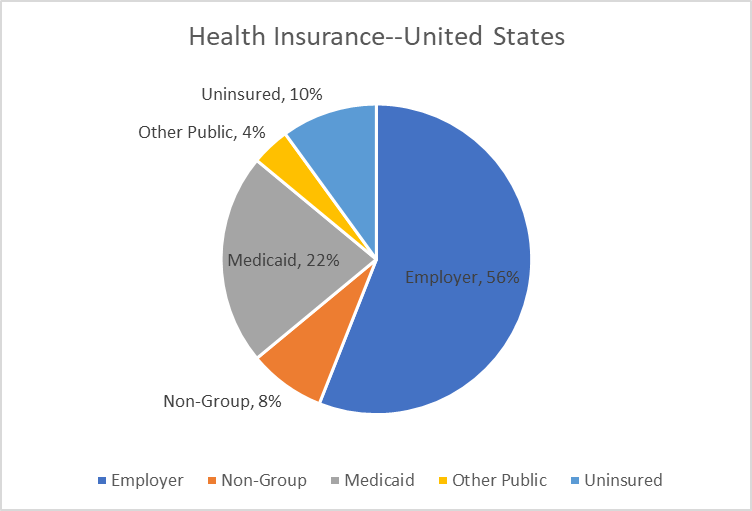 In Wisconsin the number getting insurance through an employer was even higher: 65 percent were on an employer insurance plan according to Kaiser. 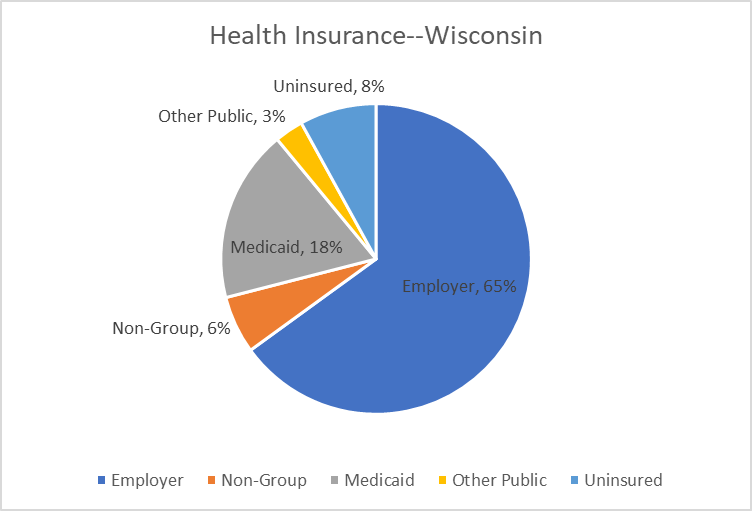 Obamacare improved employer insurance. It included preventive care without copays, allowed young adults up to age 26 to stay on their parents’ insurance, and abolished lifetime caps on the total amount that could be paid, among other improvements.

The next graph shows the annual change in the premium for employer-provided health insurance since 2000. While premiums continue to grow faster than the consumer price index, the gap has narrowed considerably since around 2008. 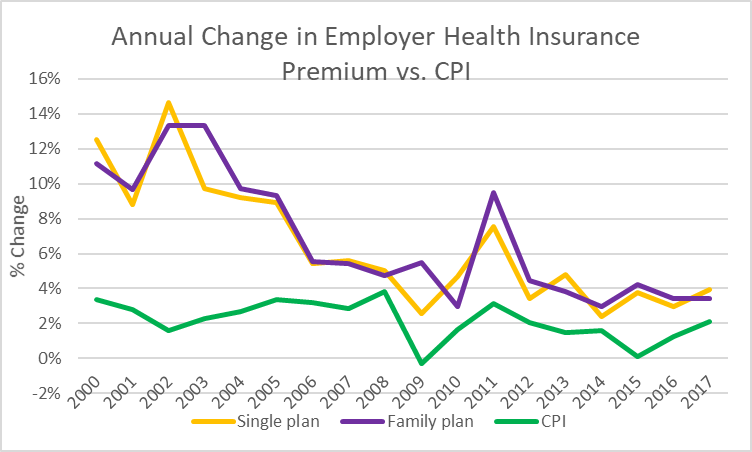 As the cost of health insurance has grown, workers have picked up a larger share of the cost, as shown below. Fewer and fewer employers absorb the whole cost. 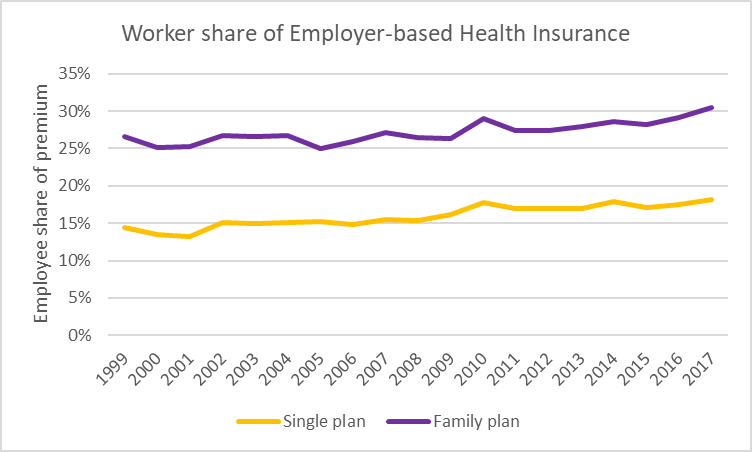 It is common among healthcare market analysts to predict the demise of employer-provided health insurance. For example, see this Huffington Post article that suggests enrollment will decline. Under the Affordable Care Act the penalty for employers who don’t offer insurance is substantially less than the cost of insurance.

In March of this year, a Kaiser Family Foundation poll asked two versions of a question about Medicare for All. The first asked people if they would support Medicare for All if all Americans would get their insurance through it. In this case, a majority of respondants—including a majority of Democrats and independents—but not Republicans–supported the plan.

The second version of the question was modified to allow people to keep other insurance if they wished. With this change a majority of Republicans became supportive. 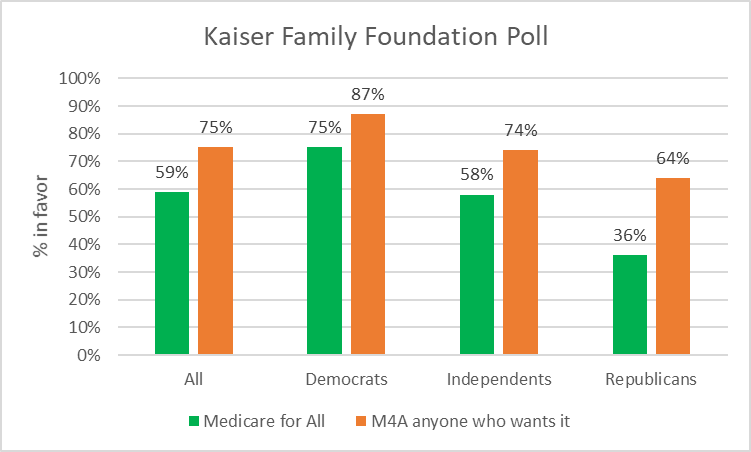 Many of the assumptions made by Sanders and the Medicare for All enthusiasts strike me as the product of wishful thinking. Given the many reasons Republicans will find to oppose expanding insurance coverage, it would make sense to develop a model that allows employer insurance and single payer to co-exist.