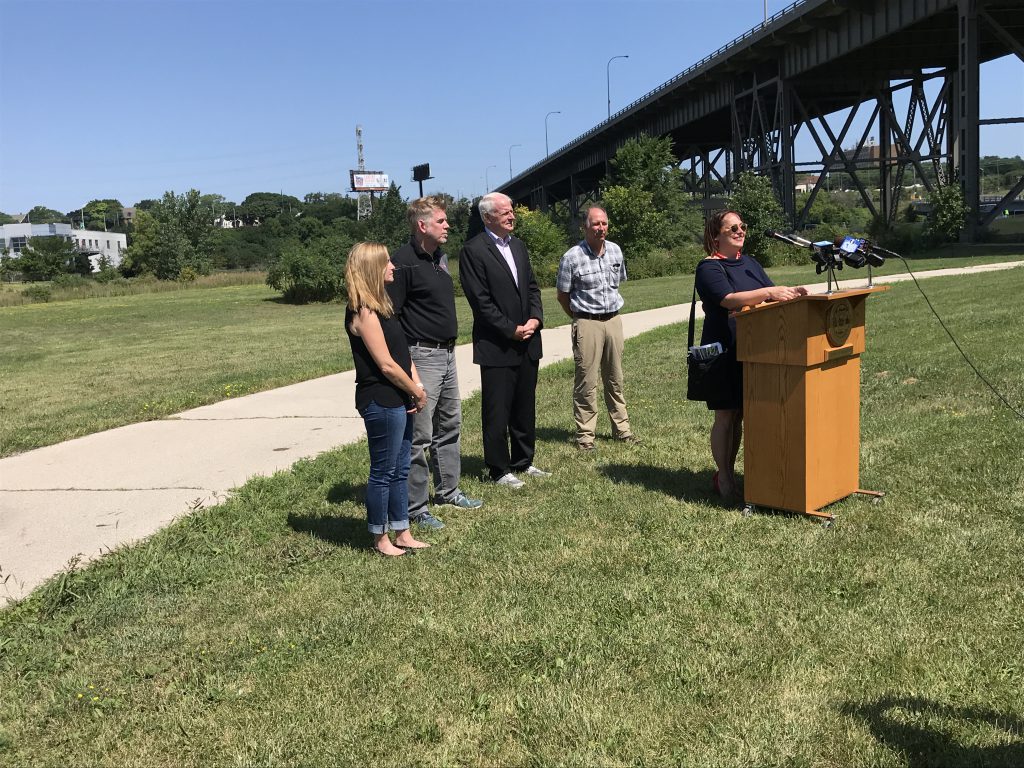 At a sunny press conference, backdropped by riparian grasses and the 35th street bridge, Mayor Tom Barrett announced the final lots in the Menomonee Valley Industrial Center will be sold.

These last lots are going to Badger Railing, using 1.8 acres for its steel fabrication, and Splat! dpi, using 2 acres for its digital printing enterprise. Each firm is already located in the valley and is moving to the Industrial Center to expand their footprint.

Barrett repeated a theme Wednesday morning that he has extolled at press conferences whenever there’s an environmental aspect. “My philosophy has been that sustainability and good environmental solutions go hand in hand with economic development,” the mayor said. “They’re not enemies of each other.” The future of urbanism, he stressed, is maintaining the ecological treasures that make a city a nice place to live, work or start a business.

This message was apt for a press conference in the valley, where old-line industries that once dominated there wreaked havoc on one of the three rivers that make up the Milwaukee river basin. But efforts to clean up this area have led to great improvement, though significant work remains. The Milwaukee Riverkeeper reported that some factories are still discharging a significant amount of phosphorous into the Menomonee River. But the valley’s ecology has certainly been trending in the right direction.

Tom Mulhaney, of Badger Railing, has been in the Menomonee Valley with the company since 1988, so he’s seen the valley change over the years. His old office used to look over what is now the Marquette playing fields. And in the morning, he would sometimes see cows wandering through and grazing, having escaped from the stockyards at a nearby slaughterhouse.

But funny cow anecdotes aside, a lot of work has gone into remaking the valley into a place where economic development can thrive alongside the local environment. Corey Zetts, executive director of Menomonee Valley Partners, Inc., called the area now home to the industrial center, “a forgotten place.”

It was “a leap,” she said, for the city to invest in this land. The Industrial Center largely sprang forth from development guidelines created in 2004 by the city and the Menomonee Valley Partners. According to a city webpage, these guidelines were developed to “Ensure high-quality redevelopment, environmental sensitivity and energy efficient construction in the Valley.” And in 2017, the Redevelopment Authority of the City of Milwaukee (RACM) approved an update of the guidelines, based upon the success of the Industrial Center, to apply to all development receiving financial or land-sale assistance from the city or RACM.

Mulhaney, and Jeff Gregg of Splat! DPI have both found the Menomonee Valley is a good fit for their businesses. Said Gregg: “I think the location is really one of the key points for us.”