A Home Built for Entertaining

Owners of this riverfront home hold their share of Democratic fundraisers. 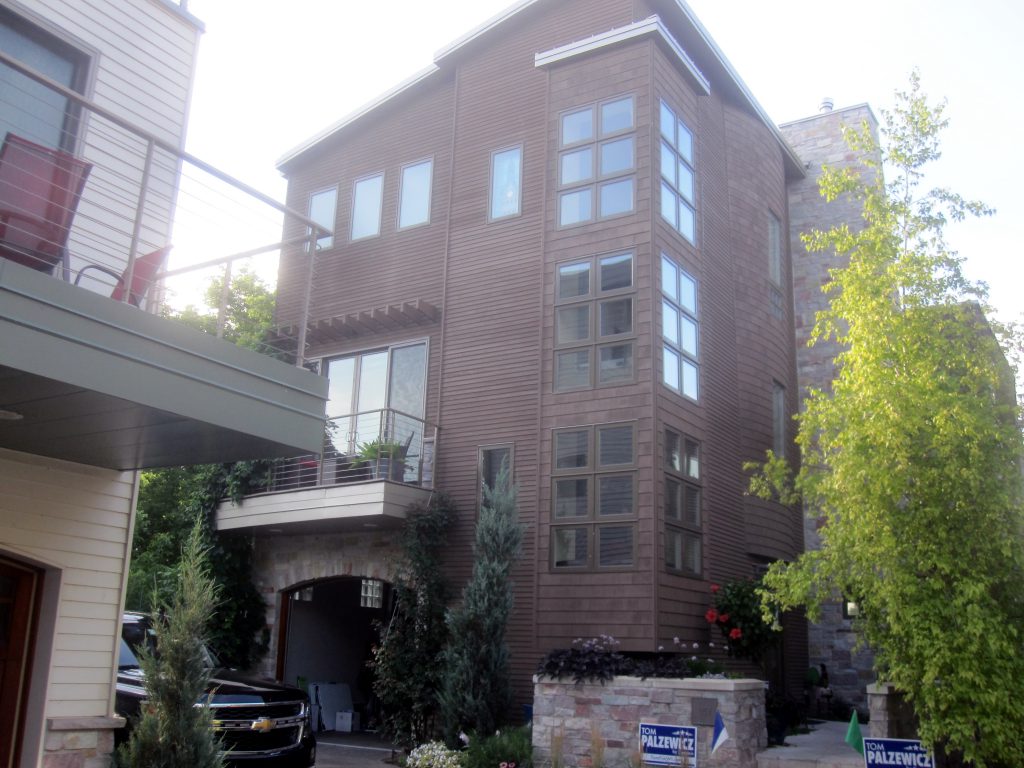 A Home Built for Entertaining. Photo by Michael Horne.

Within the next few months a number of new single family luxury homes will be completed in the Lower East Side. I wrote about the trend last year in “The Land of Single Family Homes,”  noting that two such residences were under construction on riverfront lots in the 1100 block of E. Kane Pl. While the workers are putting the finishing touches on the homes of Dave and Kay Rolston and of Jason Kuwayama, let’s pay a visit to Kane Commons, a 12-unit condominium project just upstream that provided the impetus and the nucleus for this recent activity.

Prior to its development, the Kane Commons site consisted of two parcels. The one on the east was a city-owned vacant lot, while its downstream neighbor consisted of an old home perched on the bluff that was presumably a summer cottage at one time, an old duplex in front of it, along with a pair of four-family “tenements” (as they were called on an old map), one fronting the street, and the other behind it on the deep lots. The rear tenement, where I lived, was inclined toward the river, on account of its poor underlying soils. There wasn’t a level surface in the place. It, and the cottage, were razed, while its counterpart survives as a three-unit condo, and the duplex remains a rental property. Everything else is new, constructed since 2008, with the final unit completed just this year.

The parcels were assembled and developed by Julilly Kohler, who chose one of the riverfront sites for her straw bale home, the first such structure built in the city. At the same time, she built two homes with river frontage, along with two courtyard units, designed by Russell LaFrombois III. These were of more conventional construction, but still had some notable attributes. All were connected to a geothermal system, with wells to tap the earth’s constant 55 degree temperature some 125 feet below the surface. The wells also provide stability for the soil, which consists in great measure of fill hauled to the site and dumped over the decades, when E, Kane Pl. and its adjacent river were not considered prime building sites for luxury condominium units.

In the hippie era, while Brady Street conjured up hazy images of peace and love, Kane Place had more of the attributes of the hard drug culture, and revolutionary counterculture. There were Yippies living on the street, the Kane Place Co-op, a precursor to Outpost Natural Foods, was on the site of the home Kohler was to build, and the whole neighborhood looked like it could use some tender loving care, which it is now receiving.

Of the first five buildings, only Kohler’s home and one courtyard unit, used for a model, were fully finished. The three others, including the remaining two on the river were completed to a “Grey Box” state, that is, they were sealed from the elements, but left in a rough state on the inside, awaiting completion by the purchasers, who would therefore be free to chose their own fixtures, and to arrange the rooms to their preference. This provided for some economy of scale for the developer, and added to the options for the purchaser. On the other hand, likely purchasers in need of immediate housing would have to look elsewhere. This limited the number of likely buyers. The Great Recession, which hit at that time, also took its toll, and for a number of years Kohler was stuck with a bunch of unfinished buildings on her hands. From time to time I would sweep away the cobwebs, and open the houses for the real estate agent. On one memorable occasion, I looked up from the bluff, where I was weeding, and saw Sen. Ron Johnson standing on a balcony of one of the houses. His son was in search of a home, which he found elsewhere. This was just as well for Kohler, who is active in Democratic Party politics to the extent that she was a presidential elector in 2016. She has hosted numerous fundraisers and other issue-related events at her home, which like the others, is designed for entertaining. After a number of years, the residential real estate market recovered, and in short order all of the Kane Commons homes were completed and occupied. Long gone is the “For Sale” sign. On the rare occasion when there is a vacancy at the development, the unit is sold without need of advertisement, and at a premium to the seller’s purchase price. Quality won out, and Kane Commons is a quality development, setting the pace for the neighborhood

The phrase “designed for entertaining,” is a common one among real estate agents. It is a good selling point, conveying the image of a gracious lifestyle of domestic hospitality, even if the buyer lives in one room with the shades drawn. But like their neighbor Kohler, Patrick Mutsune and Brett Timmerman, who bought their riverfront home in 2013, take their entertaining quite seriously. This has been good news for the Democratic Party. Timmerman, a real estate agent with Coldwell Banker, has developed an active interest in politics, and has opened the home to a parade of candidates with his husband Mutsune, a Quantitative Analyst with Baird, whose photograph is featured in the firm’s 2017 Annual Report.

These are no minor events, and Timmerman has sufficient tables, bars, tents, banners, flags and pennants to host a convention. If the Democrats hold their national convention in Milwaukee in 2020, Timmerman will be well practiced.

The residence is, as mentioned, located on the river, with a steep bluff below. The homes of Kane Commons are approached via a narrow driveway that is quite easy to miss, as the general character of Kane Place gives little hint to what lies beyond the homes on the street, which are designed to harmonize with the existing street fabric of mostly single family and duplex homes. (The outlier on the block is the Riverview Apartments, a 19 story “Pillar in a Park” 1965 high rise owned by the Housing Authority of the City of Milwaukee.)

The three riverfront homes sit in a courtyard setting largely devoted to driveway purposes. A small plot in the center is the site of the commons garden, which is intensively planted with annuals and perennials, along with a community herb garden.

This home features a hop vine which climbs over 30 feet every year, shading a second floor balcony, and producing an abundance of hops. It was transplanted from Kohler’s previous home. The residence is sheathed in wood and stone and has an open glassy staircase within. The fireplace chimney stack is a prominent feature of the facade. The entrance is up a couple of steps, behind a garden wall. The courtyard effect is quite unlike anything else in Milwaukee. The most common comment of first time visitors is “I didn’t know this was back here.”

Perhaps the best vantage point is from across the river, where the riverfront homes are visible from the River Revitalization Foundation‘s property. The three dwellings loom above their site, while a path constructed last year, suitable for launching a canoe or kayak, winds down to the river’s edge. The exterior of the homes are mostly glass, with sliding doors leading onto balconies on three separate levels, all beneath the living roofs. The architect varied the tempos of the buildings, but they work together in concert. Soon they will be joined by their new counterparts, the development of which was in part inspired by this one.

Kane Commons was recognized as a winner of the 16th Mayor’s Design Awards in 2012. The judges cited the mixture of historic preservation and new development, along with its green elements. Kane Commons has a Facebook page @KaneCommonsMKE. 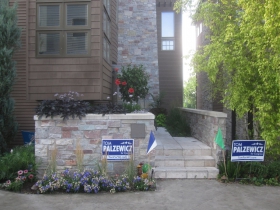 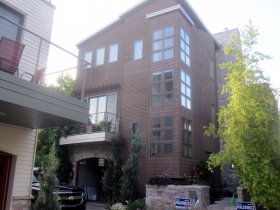 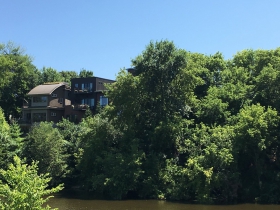 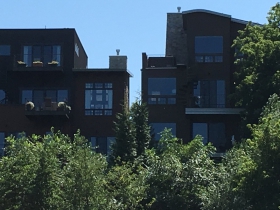 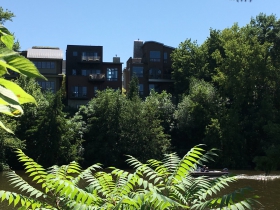 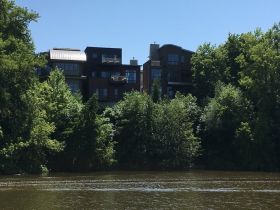