Sly’s “Stand” Is a Great Call to Arms

Innovative song might be just what certain politicians need to get some courage. 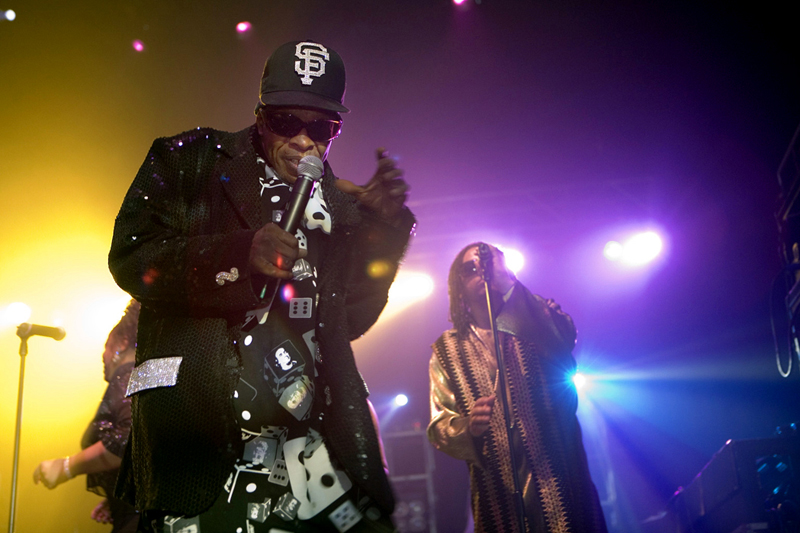 Sly and the Family Stone play the Opera House in Bournemouth. Photo by Simon Fernandez [CC BY 2.0 (http://creativecommons.org/licenses/by/2.0)], via Wikimedia Commons

I wish Paul Ryan had decided on a career in football instead of politics. Perhaps this gym rat who is also Speaker of the House of Reprehensibles would have done well. I can imagine him as a wideout for the Packers. He could keep his conservative views — I could tolerate that (just barely) if he was a gridiron hero pulling in passes from Brett Favre or Aaron Rodgers. Unfortunately, all those hours in the gym have somehow turned him into a 98-pound weakling. And who is the blonde bully kicking sand in his face? I think you know the answer.

I’d like to slip “Stand” by Sly And The Family Stone into Speaker Ryan’s iPod. Maybe it would fortify him enough to stand up to that bully, the Donald. As a rule I hate anthems, but this is one I love. It’s a call to arms, which is usually the problem, but his one makes me want to get up and strike a blow for the resistance. Most everyone else loses me when they attempt this kind of thing — egos get in the way — but Sly Stone manages it. It’s just one more item on a long list of reasons he qualifies as one of the truly important artists of the 60’s. And I mean Beatles and Dylan important.

James Brown, widely recognized as the originator of funk music, wrote the book. Sly Stone then absorbed those lessons and took them further lyrically, melodically and rhythmically. He was fresh (the title of one of my favorite album by his band) and familiar at the same time. The interacial band he assembled was overflowing with talent. Larry Graham, the bassist, completely changed the way that instrument is played. When you hear someone popping and slapping you can thank (or blame) him. The influence this group had on popular music can’t be overstated. When paradigm shifter Miles Davis heard them he shifted again and went electric. You also can hear a lot of Sly in the later recordings of the most influential guitarist of that era, Jimi Hendrix.

I can talk about how important this band was till the end of time, but had they not been as much fun as they were no one would blame you for not listening. The fact is the visceral thrills they provided are the bucket full of sugar that makes all that kind of talk go down easy. At their peak, Sly and his band radiated more energy than a nuclear power plant and you could plug into that power source while you chuckled at what could only be called the Sly-isms in the lyrics:

Two very sly lines from this lyric: “It’s the truth that the truth makes them so uptight “ and “There’s a permanent crease in your right and wrong.” Both are beyond clever, instantly memorable and true. Hard to do unless your flow is so strong it can’t be blocked. Sly could easily have been a preacher or jive-spouting radio personality.

There’s a lot of magnificent music in this track. It sounds simple, but the way it slips in and out of (and back in again) the key of A major requires skillful stealth. The long, funky chant at the end sounds like it could have inspired the one in “Hey Jude.” Everybody is familiar with the hit version “Stand!,” but I chose a live version from the Mike Douglas Show that’s irresistible, despite some minor visual annoyances. It must have been taped the day after the video editor got his or her hands on a primitive effect that turns the fades into someone’s idea of an acid trip. Once would have been hippy-drippy enough for me.

Hidden in back is the only musician to play with both Dan Hicks and Sly Stone, violinist Sid Paige. He played the terrifying solo on Hicks’ masterpiece, “I Scare Myself.” Sly would have called it “I Scare Mice Elf.” Throughout this performance, Stone is radiant or maybe stoned. I can’t tell the difference and I’m pretty sure he couldn’t back then. Finally, a bonus for fans of awkwardness — as they throw to a commercial break, Mike Douglas jumps in front of the band and does a clumsy little shuffle that looks like it was inspired by Richard Nixon. Those were the days.

“Stand!” is universal in its call to arms. It had to be in heavy rotation on the Black Power playlist. How could it not? But this anthem has aged well, losing little of its potency or relevance. Change the title to “Kneel!” and it could be used by NFL players protesting police shootings. Or put it on as you drive to another rally and thank your lucky stars you live in a country that has produced such wild geniuses as Sly Stone.

One thought on “Sieger on Songs: Sly’s “Stand” Is a Great Call to Arms”