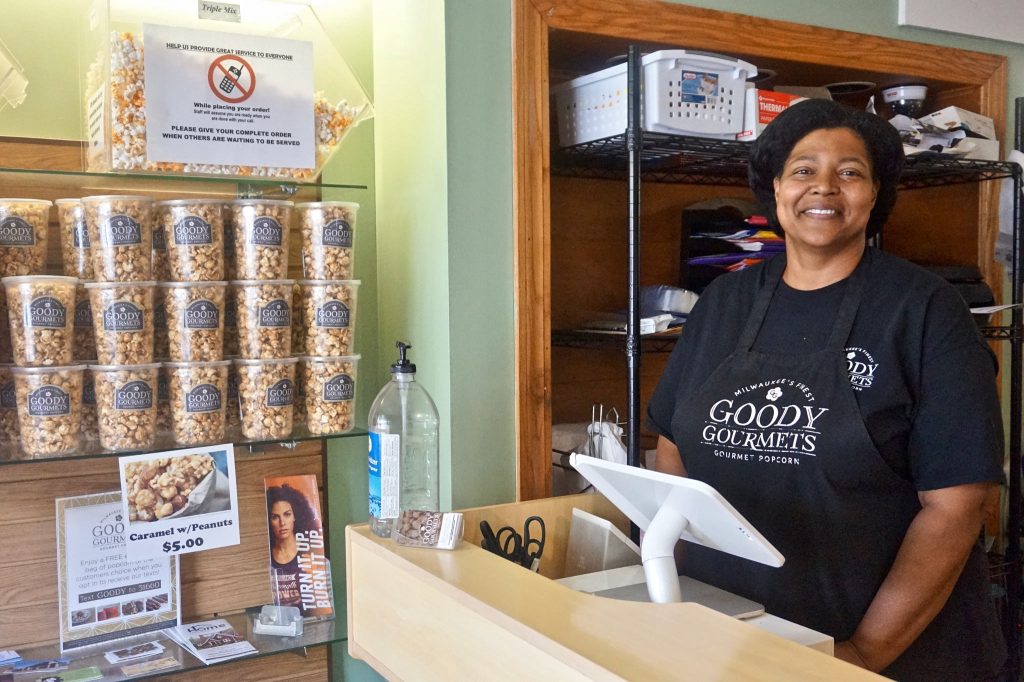 Jackie Chesser, owner of Gourmet Goods, will be selling her popcorn at Black Arts Fest MKE. Photo by Ryeshia Farmer.

The first Black Arts Fest MKE, to be held at the Summerfest grounds on Aug. 4, will focus on connecting African-Americans and Africans to their heritage through art education. The last time a black culture festival took place at Henry Maier Festival Park was at the African World Festival in 2013.

“This community needs this event to be back in the landscape of city festivals, because we have one of the largest populations in [Milwaukee] and are not represented in the lineup of ethnic festivals at Summerfest grounds,” Harris said.

People of other cultures look forward to festivals that represent and celebrate their heritage, and “we should have that same feeling,” added Lilo Allen, owner of Papyrus and Charms, which offers Jamaican and African-American-influenced jewelry and other handcrafted goods. Allen primarily sells products at community festivals, events and pop-up shops as well as online. Her home studio is located near the Midtown Shopping Center in Capitol Heights. 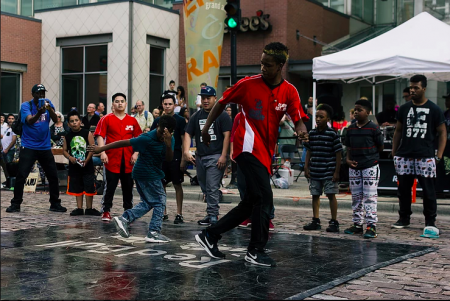 Dancers from TRUE Skool will perform at the black arts festival. Photo courtesy of TRUE Skool.

During the festival, every activity in the Children’s Play Area will be tied to African heritage, according to Harris. Children will be able to make instruments, jewelry, masks and a mural, which will all be modeled after traditionally African pieces.

Programming on the children’s stage also will be heavily tied to black cultures. The Milwaukee Public Library will lead storytelling with books written by black authors.

Referring to the Black Arts Fest, Allen said, “My hope is something that big [will] accurately represent the diaspora,” which includes Afro-Latina, Afro-Caribbean and other African cultures.

Children will be able to learn from and perform with members of Danceworks and TRUE Skool. Each performance will begin with an explanation of how the dance form came to be as well as how it relates to black history. Danceworks will offer tap dance and salsa workshops, while TRUE Skool will provide hip-hop classes.

Harris said this is important because black children are gradually receiving less exposure to their own culture and heritage.

“I think that it would be an opportunity for young people to get exposure to the arts,” said Pamela Graham, a vendor at Black Arts Fest MKE. Through her business, Nandi Collections/Reveal, Graham sells leather home decor and personal accessories with strong African and Native influences. She will be selling handmade earrings, clutches, bags, curtains, pillows and more at the festival. Nandi Collections primarily operates online, although Graham is occupying a Lindsay Heights pop-up shop until late August.

Graham will inform attendees about SEW Alive, an educational program of Nandi Collections that teaches handwork to Milwaukee youth. Summer classes focus on sewing and weaving, and also provide a space for students to talk about their lives.

Graham said that opportunities like those at the festival “create relationships and dialogue and could spark interest and creativity in people who may have never encountered certain types of art.”

Jackie Chesser, the owner of Gourmet Goods in Shorewood, will be selling her butter, cheese and caramel flavored popcorn at Black Arts Fest MKE. Chesser said that culinary and fashion design are two art forms that often go unnoticed. She appreciates that the festival will provide exposure for them.

The University of Wisconsin-Milwaukee (UWM) will have representatives from its offices of admissions and financial aid available to speak with attendees about educational opportunities. The Helen Bader School of Social Welfare, the College of Nursing and the School of Information Sciences are among the colleges that will be present. In addition, UWM will provide information about programs for middle and high school students.

Entertainment will be provided at the Miller Lite Oasis and Johnson Controls World Sounds Stages during the festival. Headliners include Tony! Toni! Tonė!, MC Lyte and a Prince Experience.

A smaller performance and workshop space, called the Artistry of Heritage Area, will focus heavily on art forms such as spoken word, African drumming and dance, and hip-hop.

Chesser said that people outside of the black community “lack information of who we are as a culture,” and individuals of all races and backgrounds should attend.

“I think everyone should be included in this festival,” she added.