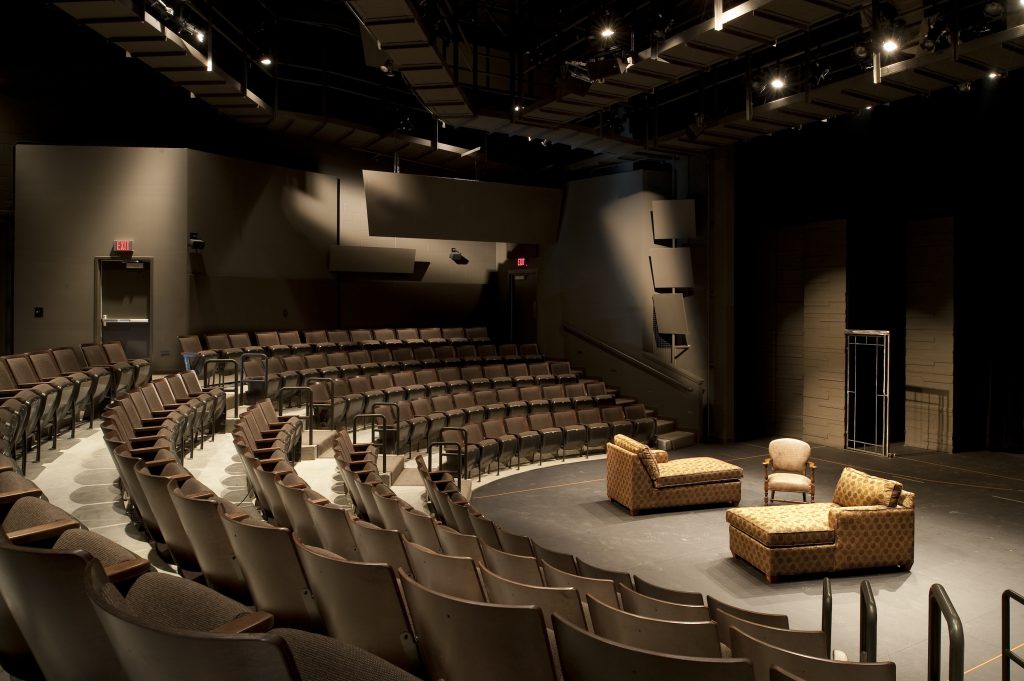 Triumphing at the Touchstone Theatre in both concept and performances was the first hour and a half of Exit the King, a ruthless, humorous, relentless exploration of death that runs two hours without intermission

Okay, don’t run for the exits when you hear what this play is about. After all, none of us can run from death but my, does the king try, even as a community of high and low observers watch with sympathy and sarcasm. And we all are sucked into hoping and wondering.

This is one of the pleasures of visiting the American Players Theatre in Spring Green – the exposure to some daring unusual concepts. It’s also a pleasure determining how they choose shows for each stage, two of which we’ve already discussed.

Not ready during the July visit by the American Theatre Critics Association was Shaw’s The Heartbreak House and Shakespeare’s Measure for Measure, both intended for the large open-air Hill stage starting in August.

The indoor 200-seat Touchstone is air-conditioned and allows more elaborate sets and lighting plus usually smaller casts and lesser known offerings – currently including one I did not see but hear good things about, Athol Fugard’s The Blood Knot, a story of two brothers, one white enough to pass (Fugard who is white and South African originated the role played here by a Milwaukee favorite, James DeVita.) Not opened on my visit was Engaging Shaw and Our Country’s Good. 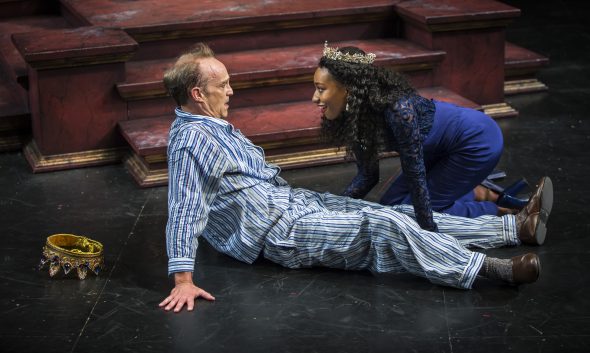 But Exit the King is a particularly daring effort. The Romanian French playwright Eugene Ionesco was considered avant-garde in the 1950s. In fact, he was what they meant when they named the style Theater of the Absurd. Today this 1962 full-length work lends itself to established yet exciting theatrical conventions in a translation by actor Geoffrey Rush and Australian director Neil Armfield: with a level of audience interplay that is almost traditional, loaded with offhand asides, sound and strobe lighting effects and a king maniacally running about the throne room chased by  two queens (one relentlessly sexy and the other relentlessly judgmental), a physician-astronomer pontificating on life, a servant forced to run after everyone and a soldier guiding the actors and the audience.

The actors include Tracy Michelle Arnold wearing words and regal clothing admirably, Cassia Thompson as the ever sexy and ever weepy young queen, John Pribyl downright scary in his doomsday doctoring, Sarah Day as the put-upon servant and Casey Hoekstra as the intrusive buffoon guard.

The language is striking, the details observant, the sense of humor constant, particularly in a magnificent performance in the title role by one of APT’s treasures, James Ridge, who contorts, resists and hysterically wails, reminding us in his up and down behavior of a scene from a Marx Brothers movie. His desperation and despair to stay alive bounce off each other in precise punctuated interplay.

Ionesco is an admirable over-writer. Every play challenges the actors to keep him from seeming too long. Late in the show, at about the point the King starts recalling a ginger cat he loved, our interest wanes and in spots revives. Director Tim Ocel’s pacing and the cast’s great power to create people within stereotypes are striking. Ridge is particularly powerful.

Back On the Hill we went to catch the newest comedy on the bill, a 1940s Broadway hit worth reviving, intending one thing when first conceived by playwright and film director Garson Kanin in his anger at D.C. corruption after World War II. But it was converted, partly by the substitute choice of actress Judy Holliday, into a play about a bimbo woken up to her internal moral power by the corruption surrounding her gangster boyfriend. He is expanding from junk steel to junk Congress. 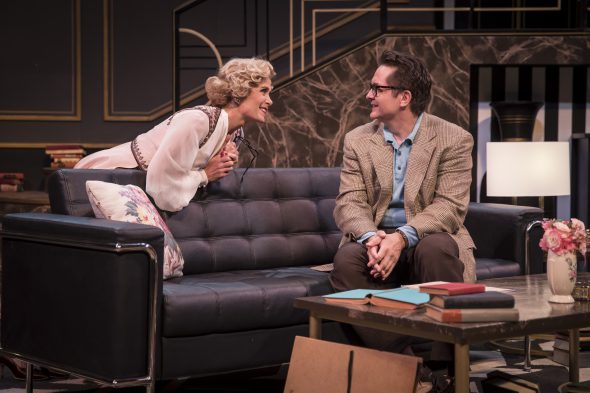 This is Born Yesterday, which director Brenda DeVita has seized on as a symbol of true mental awakening and meaningful love for former showgirl Billie Dawn, with striking roles not just for her character but for her brutal gangster keeper and gin rummy pigeon Harry (played with great skill by David Daniel) and for the D.C. investigative reporter who catches her eye and then her brain, Reese Madigan as Paul Verrall. Among those also caught in the tangle are John Taylor Phillips as a subtle constantly drunk moral conscience, lawyer Ed Devery, and Ridge again, used to bring believability to the most cardboard-written role in the piece, Senator Hedges.

Director DeVita and set designer Nathan Stuber have brought a D.C. hotel suite to life and electricity in the middle of Spring Green nature, so in that technological sense the work is a triumph. But now we have to talk about how large it was played and sometimes directed.

The comedy is indeed built around Billie, but in this production that’s even more than the norm – treating it as a star turn for an APT favorite, Colleen Madden, who has the physical skill and vocal flexibility to knock every line and bouncy bit out of the park. Any sense of subtlety and humanity fades in the process.

When Billie recalls her hard-working disapproving father, we get the story but not the heartbreak. When Billie wants to go all chorine and hippy, it’s more overblown than Mae West. When she hums while playing cards, it’s an aria for laughs rather than a revelation of character brains. Any sense of her standing in for the unthinking public suddenly forced to start thinking – which is the key to her appeal and to the play’s pull – is a meaning forced upon us.

Some of the actors seek a quieter approach – and find room and recognition in Kanin’s words. Madigan, knowing he shouldn’t match Billie’s brazenness, underplays his romantic intent smartly but then overplays to the house his patriotic ideas, which are overwritten in 1940s “we the people” style anyway. The applause from the crowd about the need to clean up Washington doesn’t need any extra rhetorical push these days.  The audience in farmland Wisconsin was clearly way out in front.

The skill behind this production is eminently clear and the audience response was obvious. But to want Billie Dawn to be larger than life doesn’t mean she shouldn’t be about life.

Visitors should not neglect the area’s beauty, the theater’s picnic grounds and the delicious catering opportunities, all spelled out at americanplayers.org. But leave time to get out of the parking lot, which is like Miller Park every night. 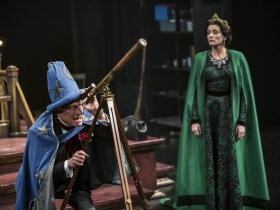 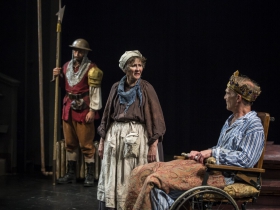 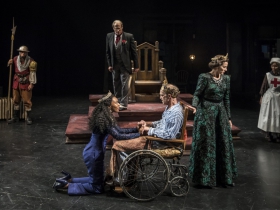 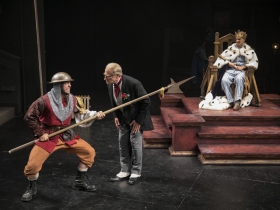 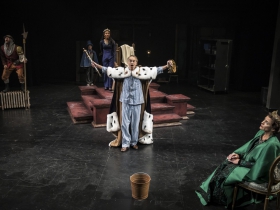 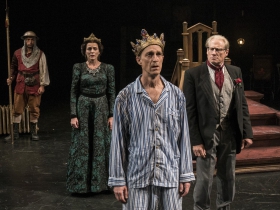 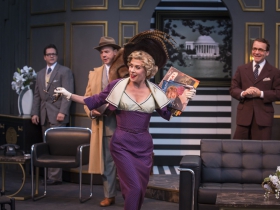 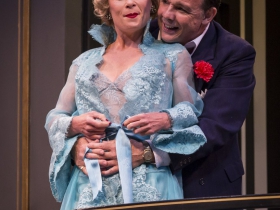 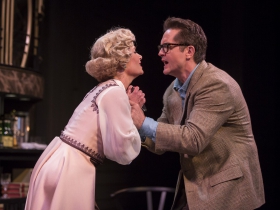 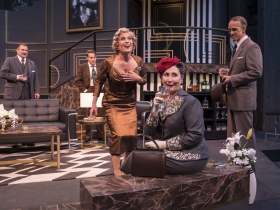 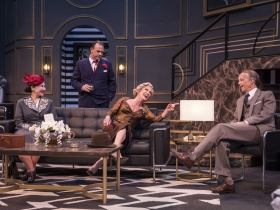 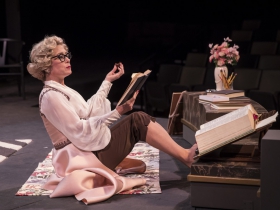