By Jenny Whidden, Milwaukee Neighborhood News Service - Jul 18th, 2018 11:04 am
Get a daily rundown of the top stories on Urban Milwaukee 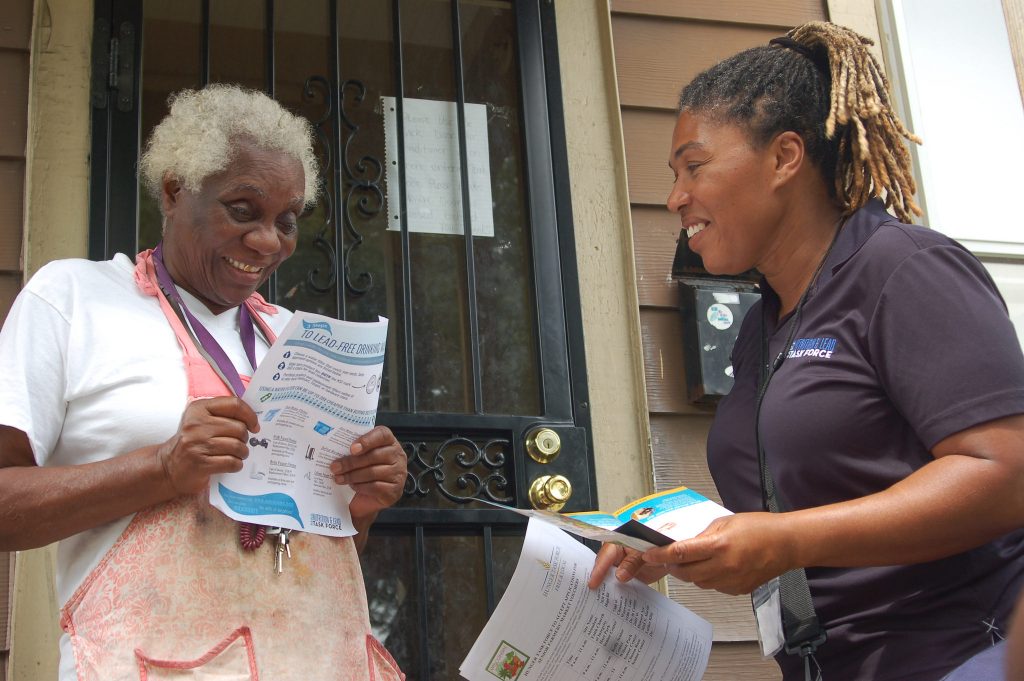 Each week day, Amani neighborhood residents Marsha Ashley and Orean Harper knock on their neighbors’ doors from 10:30 a.m. to 3 p.m. The backs of their shirts read, “Lead-Free Amani.”

The pair speak with residents about the dangers of lead and how to prevent poisoning. Their goal is to knock on every door in their neighborhood — about 5,200 homes.

Ashley and Harper are canvassers for the Milwaukee Nutrition & Lead Task Force, which was formed by Hunger Task Force (HTF), and is working with the Amani neighborhood’s Dominican Center to provide lead education.

“We realized pretty early on that going door-to-door and having these conversations was incredibly beneficial, and so we wanted to be able to do it in a more intentional way this summer,” Stienstra said. 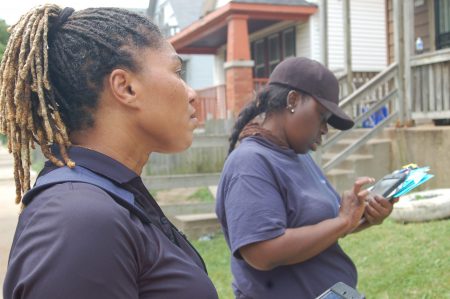 Canvassers Marsha Ashley (left) and Orean Harper use tablets to keep track of the doors they have knocked on. Photo by Jenny Whidde.

He added that HTF is partnering with the Dominican Center because it is essential to conduct the campaign with culturally competent staff. HTF wanted to work with an organization that was already established and respected in the Amani community.

“The canvassers that work for this project both live right in the area, both within a few blocks of the Dominican Center. These are their neighbors that they are talking to; this is their community. These are problems that they’re facing,” Stienstra said.

Ashley, Harper, Stienstra and Earn & Learn students from Employ Milwaukee began canvassing on June 11 and will end on Sept. 30. With a month behind them, Stienstra said the team members are having more conversations than they had expected.

They originally predicted they would talk to five to six families a day, but they are actually reaching eight to 10 families a day.

“The conversations are taking longer than I thought, but in a really good way,” Stienstra added.  “It’s because families have questions and they want to talk about this.”

“(The residents) are just happy that we come by in the neighborhood,” Harper said. “The longer we talk to them, the more they know. I’m happy [about] that.”

At the start of summer, the task force mailed a survey to all Amani residents. The survey poses questions related to lead education such as “Circle four good sources of Vitamin C.” Key nutrients to help prevent absorption of lead are Vitamin C, iron and calcium.

Richard Diaz, the Amani community organizer at the Dominican Center, said though some of the survey’s questions seem simple, people don’t know this kind of general information about lead.

“People don’t know about how harmful this stuff is, how widespread it is in the neighborhoods and in the country, and how actually you can protect yourself,” he said.

Diaz said the task force plans to send out the same survey at the end of July and again at the end of September to measure how effective the door-to-door technique is.

If a resident mails the survey back, she or he is entered for a chance to win a $100 Visa gift card. Canvassers draw two winners a week.

Every morning, the task force members set out from the Dominican Center about 10:30 a.m. At the door, canvassers tell residents about the three main sources of lead in homes: paint, water and soil. They also teach them how to identify the presence of lead, what to do and what not to do.

Ashley said people in Amani generally know not to drink the tap water, but the conversation about tap water often is based on rumors.

Before being hired as a canvasser, Ashley said she vaguely knew about the lead crisis from the ‘90s. Now, she realizes some of the misconceptions she once held. “I remember (the crisis), but it’s like, ‘Oh that’s paint; no one said anything about the water,’” she said.

Canvassers also teach residents what to eat to help protect their bodies from lead. They let them know that an empty stomach increases the rate of lead absorption.

If no one answers the door, they leave an informational flier about water filters as well as a door hanger that points to information online.

Before the project began, the canvassers underwent a weeklong session of classroom training, which emphasized that they should direct families to appropriate resources.

“If people have questions that are medical…none of us are doctors,” Stienstra said. “We’re going to make sure that we point [them] to the nearest WIC (Women, Infants and Children) clinic or make sure we talk to them about how to get in touch with a pediatrician.”

HTF Executive Director Sherrie Tussler said she hopes the task force can learn from the project and replicate it in other neighborhoods.

One thought on “Warning Residents of Lead Dangers”