Building on 42nd and North, vacant since 2003, would feature various retail vendors. 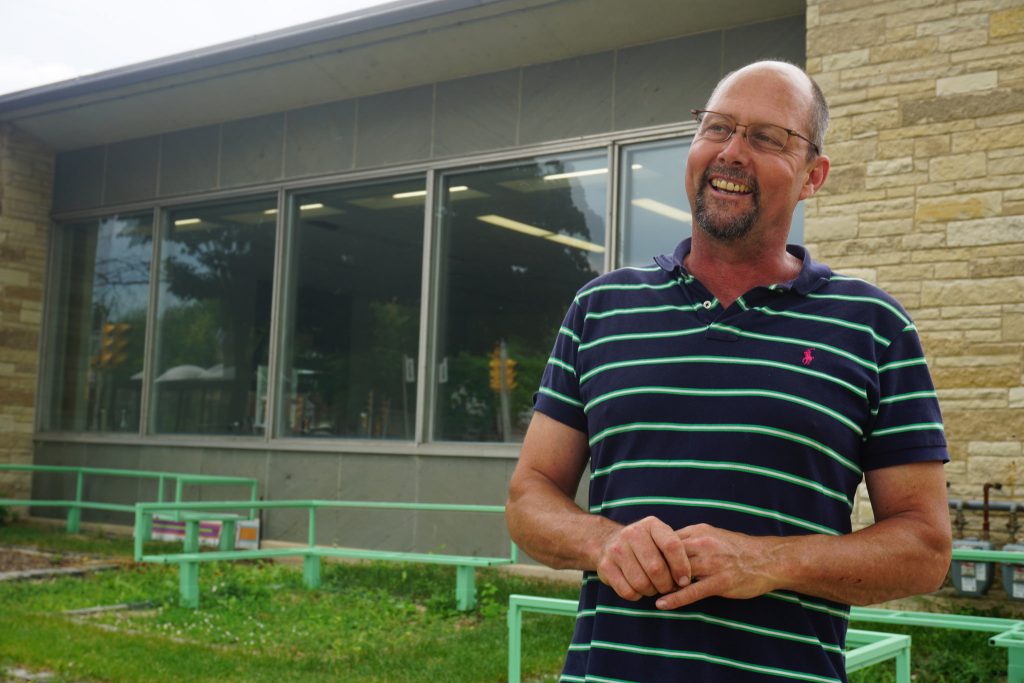 Matt Bohlmann stands outside the former Finney Library, which he purchased from the city in 2015. Photo by Abby Ng.

Three small business owners recently signed leases for space in the building that housed the Finney Library for 50 years. Building owner Matt Bohlmann was working to develop a financing package to convert the building into a marketplace for 12 food vendors when he received calls from several entrepreneurs who were losing their Milwaukee Mall rental space.

“I decided to take the bird in the hand,” Bohlmann said.

The Finney Library building, at 4243 W. North Ave., has been vacant since 2003 when Milwaukee Public Library built the Washington Park branch at 2121 N. Sherman Blvd. to replace it.

Bohlmann had visited the library as a child and had admired it for years. He purchased it from the city in March 2015. Since then he has been making repairs and working to repurpose the historic 1953 structure. His original plan was to move his own custom-made fine furniture workshop there and rent the remaining space to other artists. 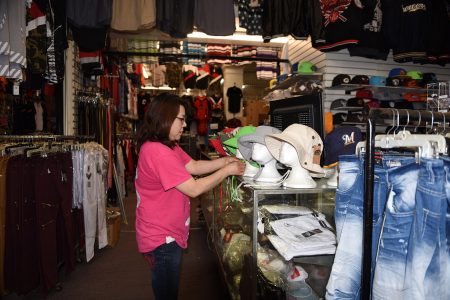 Ann Lee, the owner of A-Fashion, arranges hats in her store at Milwaukee Mall. Photo by Sue Vliet.

Bohlmann had inadvertently created a business incubator on State Street in Wauwatosa. Prior to buying the former Finney Library, he acquired a 54,000-square-foot building that was much larger than he needed for his own studio and decided to rent his extra space to businesses that had outgrown their garages or other start-up spaces. He found he enjoyed providing opportunity and nurturing these entrepreneurs and wanted to do the same for artists, he said.

But discussions with prominent local artist Reginald Baylor and other artists who considered renting studio space in the building, did not pan out for a variety of reasons, including the financial pressure that artists typically face. He mentioned that at least one prospective tenant’s husband did not want her working in the neighborhood in the evening because of safety concerns.

Bohlmann’s next concept was to seek out food vendors and create something like the Milwaukee Public Market.

“My product design had 12 spaces called turnkey kitchen kiosks,” which would be prepared with permits and ready for occupancy, Bohlmann said.

The problem with the idea was that the $3 million budget was too expensive, he said.

Bohlmann said he has invested $350,000 in the building, including $9,000 from a façade repair grant from the city.

“It is really hard to get anyone to lend any money to anyone in the inner city,” he said. “With the past projects I’ve done, I’ve been a good credit risk for more than a decade … if I have trouble with my record, someone with less experience” will have an even harder time.

Bohlmann thought that after the unrest in Sherman Park in August 2016, financing opportunities might open up, but that has not been the case, he said.

He noted that he has a verbal commitment for financial backing from the Milwaukee Economic Development Corp. “They do loan packages when banks don’t want to get involved.” However, “getting any kind of financing with any group takes at least 90 days,” he said.

“Access to capital is critical,” he said. “I have a great building on a high-traffic corner with an experienced developer and I need to be able to walk into the bank and walk out with money.”

The city’s Neighborhood Improvement Development Corp. is willing to work with him to attract tenants to the building, he said.

While Bohlmann was working with a consultant to figure out how to arrange financing, Antoinette Carter, the owner of #Designerz, called.

#Designerz is “known as the home of ‘the $100 designer outfit,’” said Carter, who has sold designer apparel, accessories and jewelry at wholesale prices at the Milwaukee Mall for the last three-and-a-half years.

Real estate developer Kalan Haywood is redeveloping Milwaukee Mall, a former Sears, Roebuck and Co. building at 2100 W. North Ave. that has been home to vendors selling clothing and other products since the early 1990s.

When Carter found out in May she would have to vacate that space in a few months, she thought, “I have to get into something really quick.” A business owner she knows suggested that she call Bohlmann, and Carter referred others at Milwaukee Mall to him.

Carter and other tenants tried to get help finding rental space from the North Avenue Fond du Lac Marketplace Bid 32 but received no help at all, she said.

She signed a three-year lease at Finney and said she hopes to open there in August. Bohlmann said the tenants have the option to renew their leases for another three years.

The other two businesses that have signed leases at Finney are Young Sport, owned by Jinne Chung, and A-Fashion, owned by Ann Lee. Both long-time businesses sell clothing and accessories.

The three tenants will occupy about 6,000 of the almost 11,000-square-foot building, Bohlmann said. He is working with three additional prospective tenants.

Bohlmann, who has not been making furniture since he bought Finney, said he is passionate about the project. He joined the North Avenue Gateway Business Improvement District board and is now treasurer. The BID has supported his development efforts and has also helped bring two new businesses, Domino’s Pizza and BC Supermarket, to the block on North Avenue.